(Minghui.org) The Meadow Festival Edinburgh was held in Meadows Park after a two-year hiatus due to the pandemic on June 4 and 5, 2022. Falun Dafa practitioners from Scotland, Newcastle, and London participated in the festival. They demonstrated the exercises and distributed information about the Chinese Communist Party’s (CCP) persecution of Falun Dafa. Many people were eager to learn more about Falun Dafa and signed a petition to end the persecution. 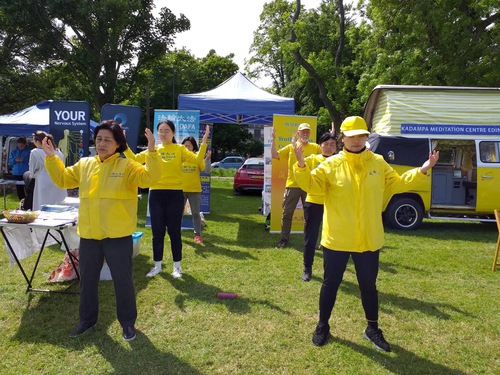 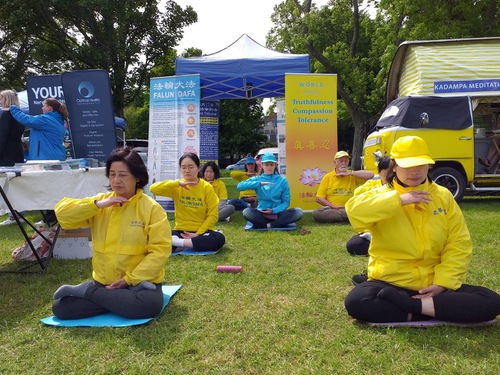 Practitioners demonstrate the Falun Dafa exercises during the Meadow Festival Edinburgh on June 4 and 5, 2022.

This year more people of all ethnic groups expressed their interest in learning Falun Dafa. Practitioners explained that on the Falundafa.org website, they could find the locations and schedules for free instruction in Edinburgh and around the world, as well as online instruction. 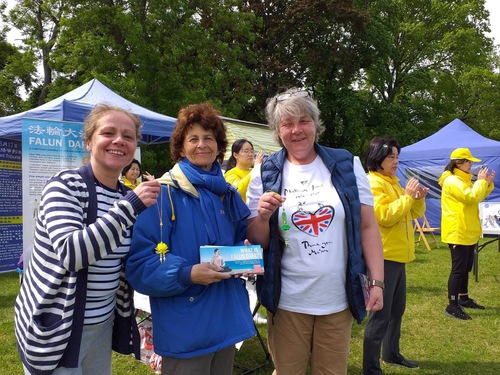 Karen (left) takes a group photo with another woman (right) and Rosemary, a practitioner.

Ms. Karen from Edinburgh was moved by the peaceful exercises and carefully read the display board explaining the five Falun Dafa exercises. When she learned that there is a free class in Edinburgh, she happily hugged a practitioner named Rosemary, who coordinates the class. She said that she often lost her balance when she walked, but this time she was fine. 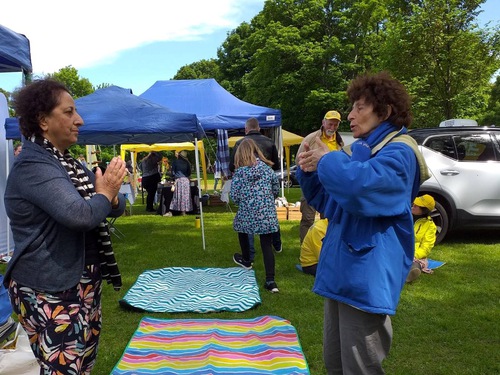 Ms. Kurdish wished to learn the exercises, so Rosemary taught her the first exercise. Ms. Kurdish told her daughter, “This is great.” She said her hands and belly felt warm and she was comfortable. She said she finally found what she was looking for. 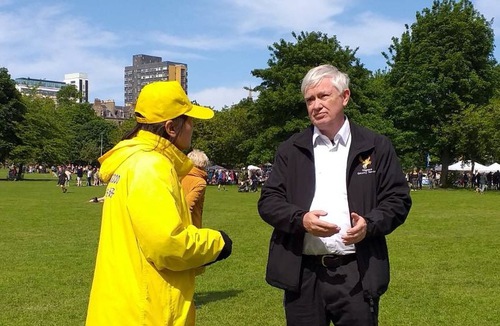 A man who works at Pegasus Security service explained that he practiced Tai Chi and Buddhism, but he gave them up during the pandemic lockdown. In order to understand the difference between Falun Dafa and what he previously practiced, he stood and quietly watched practitioners as they did the exercises. A practitioner explained what Falun Dafa is. He said that he very much agreed with the principles of Truthfulness-Compassion-Forbearance and hoped to learn the exercises.

Rosemary told the Minghui reporter that she was kept busy during the event telling people about Falun Dafa. Many people were interested in learning to practice and she told them the location and contact information of the practice site in Edinburgh. Many people also signed a petition to support practitioners’ efforts to end the persecution. 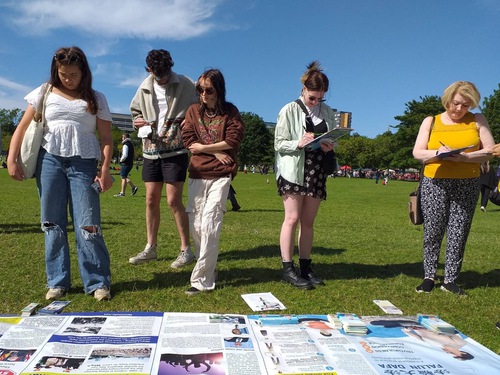 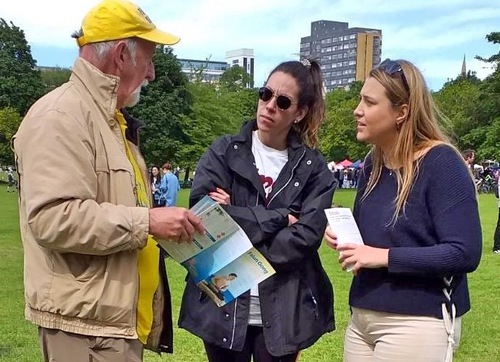 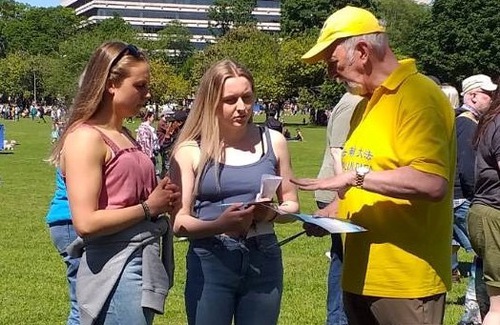 A woman who assists with organ transplant surgeries told her companions how the CCP harvests organs from Falun Dafa practitioners while they are alive. She also told a passerby about Falun Dafa and how it’s persecuted in China. Afterwards, they all signed the petition to end the persecution. 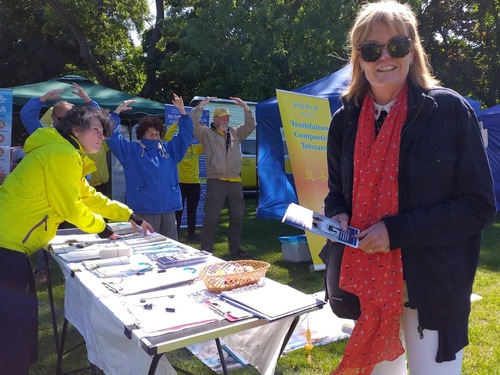 A woman who assists with organ transplants told others how practitioners are targeted for persecution by the CCP.

She told a practitioner how she learned about Falun Dafa during an organ transplant conference in Boston, in the U.S. She learned that the CCP conducts organ harvesting from practitioners while they are alive. She signed the petition and called on the UK government to urge the CCP to stop the persecution.

A man from Glasgow told practitioners that he learned about Falun Dafa after watching a movie called The Bleeding Edge, and he still remembers every detail. The film tells the story of how a woman began to practice Falun Dafa and the positive changes she experienced. Despite the CCP’s rampant persecution, she still firmly adhered to her belief. The CCP put her in jail, and ordered by the prison guards, drug addicts abused and tortured her. After she was freed, police arrested her again on the street and stole her organs. The man said he knew he must do something to stop the persecution. 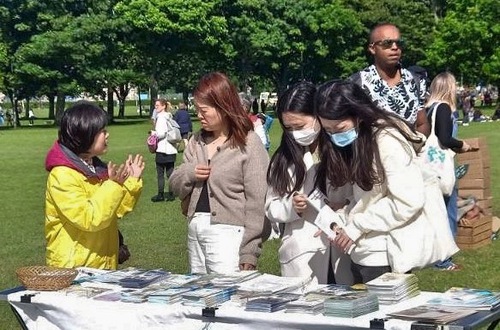 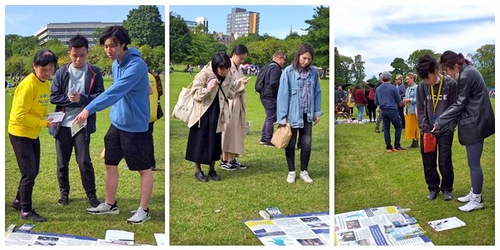 Chinese people learn about Falun Dafa and the CCP’s persecution.

New Hong Kong Immigrant: It Is Great to See You!

A middle-aged Chinese man stopped in front of the display board. When a practitioner approached him to chat, he exclaimed, “It’s great to see you! I’m so happy!”

The man explained that he immigrated to Edinburgh from Hong Kong last year. He said that before 2019, many large-scale Falun Dafa parades could be seen in Hong Kong every year, which were impressive. But he said now Hong Kong has no freedom. He also said that Hong Kong people do not like the CCP, which dispatches people to interfere with and destroy the Falun Dafa information sites.

Since the CCP initiated the persecution of Falun Dafa on July 20, 1999, practitioners in Hong Kong have persisted in clarifying the truth to Hong Kong citizens and people from China at various tourist attractions.

An elderly couple from Hong Kong who do not speak Mandarin and are also new immigrants stopped and read the information. When they saw the words Truthfulness-Compassion-Forbearance and Falun Dafa on the practitioners’ T-shirts, the wife pointed to the words and said in English that she knew them. She then told practitioners about their experiences in Hong Kong and the situation with the Falun Dafa sites there.

During the two days the festival was held, practitioners met many other recent immigrants from Hong Kong. They expressed their support for Falun Dafa and its principles of Truthfulness-Compassion-Forbearance. They also condemned the CCP’s groundless persecution of Falun Dafa. A young man said that he would tell his parents in Hong Kong to sincerely recite: “Falun Dafa is good, and Truthfulness-Compassion-Forbearance is good.”

In addition to the Chinese people from Hong Kong, there were also Chinese from Malaysia, Taiwan, China, and other regions who attended the festival. Some Chinese said that they not only learned about Falun Dafa themselves, but also took the initiative to introduce it to other Chinese by browsing the Falun Dafa websites and watching videos about Falun Dafa.

Quitting the CCP and Its Organizations

There were also those who were misled by the CCP’s lies and propaganda and misunderstood Falun Dafa. The practitioners told them that Falun Dafa teaches people to be good according to the principle of Truthfulness-Compassion-Forbearance. The practitioners also explained how the CCP staged the Tiananmen self-immolation incident and pointed out the flaws one by one. The practitioners also told them why millions of Chinese have already withdrawn from the CCP and its affiliated organizations. After listening, some took fliers. Some asked about how to quit the CCP and its organizations online, and said they would withdraw after going back.

A young man from Xiamen, Fujian Province, China also asked practitioners to help him search for the film False Fire on his mobile phone, which revealed the truth about CCP-staged self-immolation.

During the event, 19 people agreed to withdraw from the CCP and its organizations. Two of them withdrew on their own initiative.

“Montreal: Meditation and Music Draws Interest in Falun Dafa and Support to End the Persecution”