Home > Persecution > Accounts of Persecution
Displaced Tianjin Resident Sentenced to 13 Years in Ningxia for Practicing Falun Gong
May 9, 2022 | By a Minghui correspondent in Ningxia, China

(Minghui.org) A Tianjin native who moved to Yinchuan City, Ningxia Province was reportedly sentenced to a 13-year prison term for practicing Falun Gong, a spiritual discipline that has been persecuted by the Chinese communist regime since 1999.

It was reported that Mr. Chu Jidong, a 47-year-old Tianjin native who moved to Yinchuan to avoid the persecution, is currently being held in the Yinchuan City Detention Center. He has been on hunger strike for at least 90 days, to protest the persecution, and he is constantly being force-fed. Other details about his case aren’t clear.

Mr. Chu was first arrested in September 1999 for appealing for Falun Gong in Beijing. He was given one year of forced labor on September 14 that year and taken to the Shuangkou Forced Labor Camp. He held a hunger strike for three months and was on the verge of death. When the one-year term expired, the authorities gave him another year, as he refused to renounce Falun Gong.

Mr. Chu was forced to do unpaid labor in the second half of 2000, including making balloons and artificial flowers. Due to the poor sanitary conditions, his hands festered and oozed out pus. Instead of taking him to the clinic for medical treatment, the guards ordered the inmates to beat and verbally abuse him. 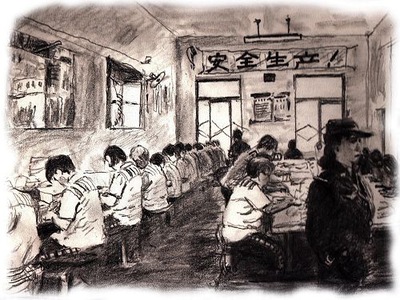 During a meeting at the Shuangkou Forced Labor Camp on September 13, 2001, its director Zheng Jindong said to practitioners who refused to renounce Falun Gong, “Let me tell you, even if your term is extended for one year, that’s not the end of it. Isn’t Chu Jidong one example? We had issued the release paperwork for him on Sunday (September 9), but he still can’t go home. We are taking him to a brainwashing center. If he doesn’t transform, we will arrest him again and give him another three years of forced labor. Then we can extend his term for another year.”

Mr. Chu was transferred to the Banqiao Forced Labor Camp in October 2001, shortly after the meeting, and indeed given another three years of forced labor.

The guards organized a brainwashing session in March 2003, targeting Falun Gong practitioners who remained firm in their belief. The guards first deprived the practitioners of sleep and then physically tortured them, including hitting them on their cheeks, striking their throats with palms, and hitting and kicking their joints and leg tendons. They also scraped the practitioners’ ribs with a lighter and shocked them with electric batons on their necks, armpits, and private parts.

While persecuting Mr. Chu, the guards placed the photo of Falun Gong’s founder on the ground and ordered him to step on it. As he refused to comply, they beat him and shocked him with electric batons.

After two years in the Banqiao Forced Labor Camp, Mr. Chu was taken back to the Shuangkou Forced Labor Camp, where he held another hunger strike to protest the persecution. When he was on the verge of dying, the guards forced his parents to write a waiver, clearing the guards of any responsibility should Mr. Chu die from the force feeding.

The guards also threatened to extend Mr. Chu’s term for another three months when the three-year labor camp term expired on October 14, 2004. His family was denied visits with him as well.

“A Person of Noble Character”

“Falun Gong Practitioners Interviewed by a TV Station in Guadeloupe”