(Minghui.org) More and more people are learning the benefits of practicing Falun Dafa. Every year on Falun Dafa Day, practitioners in Japan express their gratitude to Mr. Li Hongzhi for introducing his teachings to the world. With the 30-year anniversary of Falun Dafa’s public introduction just around the corner, they recounted how they began practicing and improved themselves over the years.

The founder of Falun Dafa, Mr. Li Hongzhi, first taught the practice on May 13, 1992, in Changchun, Jilin Province. The principles of his teachings, Truthfulness-Compassion-Forbearance, have guided people to higher moral standards. Falun Dafa is welcomed by people in over 100 countries worldwide and received over 5,000 proclamations, resolutions, and letters of support. May 13 is recognized as Falun Dafa Day in many countries. 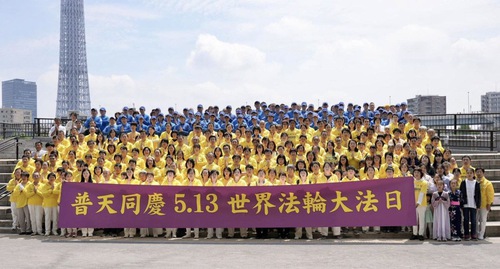 Happy to Discover My Shortcomings 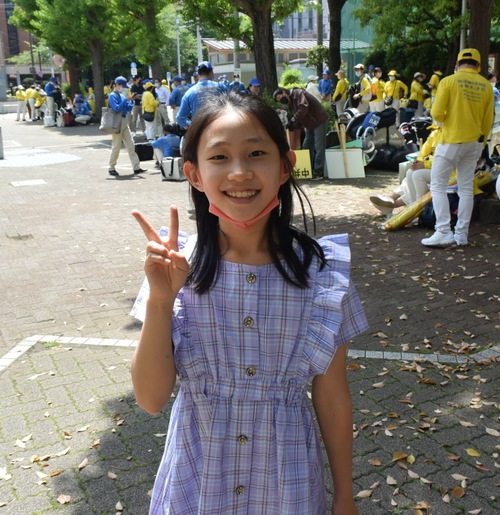 Ten-year-old Yamakawa Akari has practiced Falun Dafa since she can remember. Two years ago she was leafing through a booklet about the Art of Zhen Shan Ren (Truthfulness-Compassion-Forbearance) International Exhibition and saw the aura around a practitioner being tortured by a police officer. She knew that Master Li was protecting the practitioner and was very moved. She decided to learn more about the practice and follow the principles of the teachings in everything she did.

“I used to get upset when I played with my cousin and he said bad words to me. After reading Zhuan Falun, I understood what it meant to temper myself. I learned how to control myself when I dealt with my cousin or my friends at school because I didn’t want to lose virtue. I was able to handle difficulties calmly. When my parents disciplined me, I used to throw a tantrum or talk back. Now I reflect on myself and try to find what I did wrong. Identifying my shortcomings makes me really happy. I follow my parents’ instructions well now.

“When I had hives, a headache, or faced conflicts, I knew Master had arranged these tribulations to help me improve. He has shouldered a lot of karma for me and given me so many things so that I can reach consummation.” 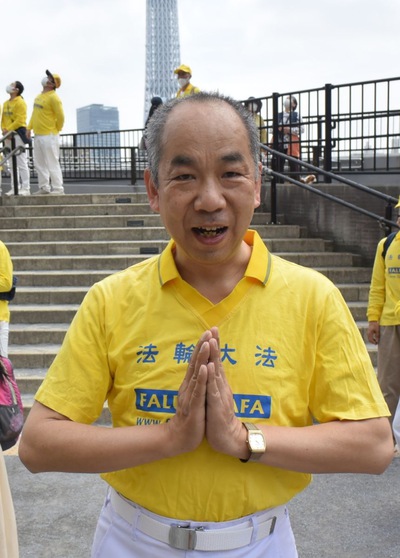 Mr. Mukonshi attended the first Shen Yun Performing Arts show in Japan in 2007. He was so touched by the stories, he decided to learn Falun Dafa. Before he began practicing, as soon as he had a cold or a headache, he would take something for it. Even though he no longer takes anything, his headaches quickly go away. He also used to be allergic to pollen. He can’t remember when his symptoms disappeared completely.

“Master’s grace will be engraved in my heart for all eternity, and I will progress in cultivation.”

Mr. Nakamura read about Falun Dafa in The Epoch Times in 2017. He had a familiar feeling when he saw the Chinese characters for “Falun Dafa.” He sought out the books and started reading the teachings for two hours every day.

Because he used to be plagued with many health problems, he couldn’t move around much. By cultivating, not only did he become healthy, he could face his problems and improve his relationships with the people around him.

“I thank Master for his constant care and for guiding me through the teachings. I will work hard.” 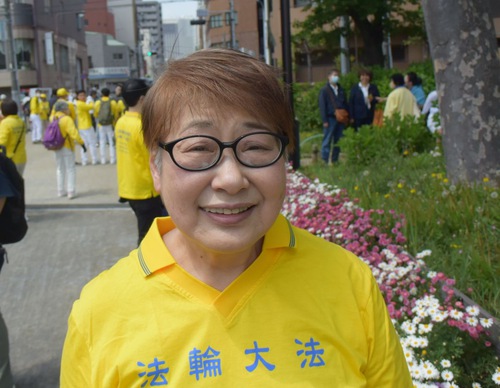 Ms. Emi Hagino suffered sudden back pain in 2007. She was 60 years old at the time, and the pain was killing her. Her sister Ms. Sato Machiko recommended Falun Dafa to her. “I went to Tokyo to learn the exercises. Three months later the back pain went away,” said Ms. Hagino. “It was truly a miracle. After spending time with Chinese practitioners and working with them, I feel reinvigorated. There is no difference between the Chinese and Japanese practitioners—we are all Master’s disciples. In the latter half of my life, I encountered Falun Dafa—I feel so fortunate. I will walk the path of cultivation well and I thank Master for guiding me.” 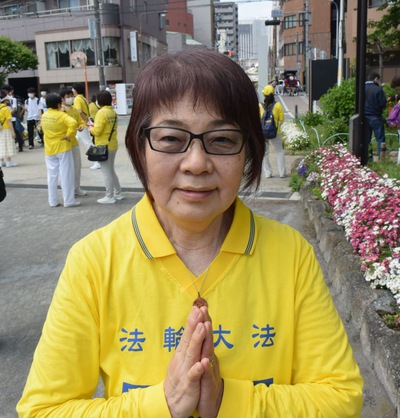 Ms. Machiko Sato said, “I first learned about Falun Dafa in 2007. I went to a Chinese doctor for my back pain and he suggested I try Falun Dafa. Shortly after I learned the exercises, I could meditate for an hour. Although my legs hurt from sitting in the full lotus position, I could walk comfortably after that. My back pain and leg problems disappeared. No words can describe my gratitude to Master and Falun Dafa.” 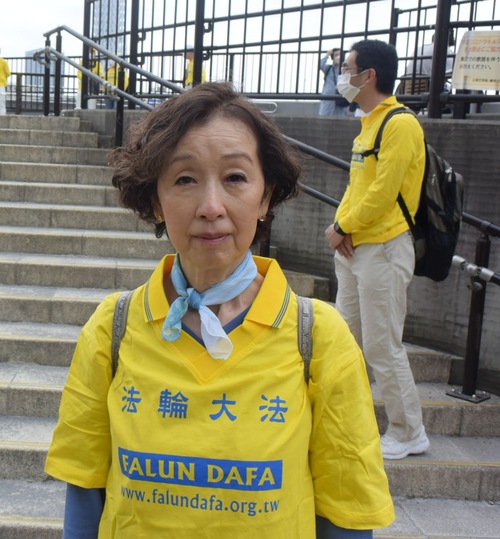 Someone told Ms. Yumiko Kodera about Falun Dafa when she was in New York City in 2003. “I had bronchitis every spring and couldn’t stop coughing. I was also depressed and felt cold all the time. As weak as I was, practicing Falun Dafa made the illnesses go away. I wanted to follow the teachings and become a better person from the bottom of my heart. Without Master’s compassionate arrangement, I might not have persisted in practicing. Thank you, Master,” said Ms. Kodera. 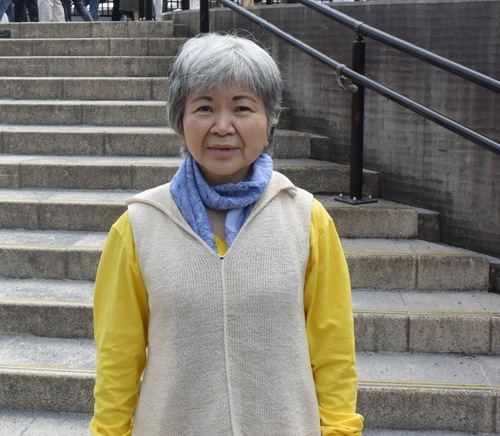 Ms. Megumi Komuku said that she used to be irritable, anxious, and selfish and often quarreled with others. “A practitioner I knew started an exercise site in June 2007 and taught me the exercises. After I began practicing myself, I got along better with my husband and we now have a good relationship. I remained a steadfast practitioner thanks to Master’s guidance,” Ms. Komuku said. 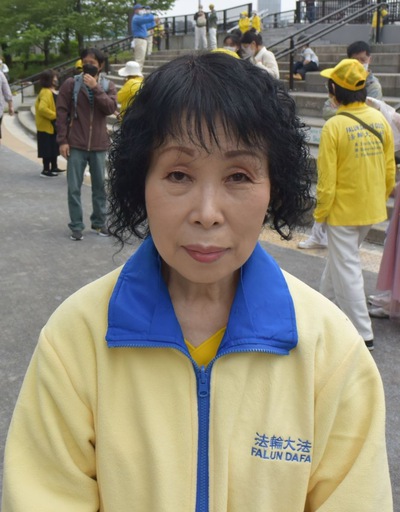 “A book I read in 2004 said, ‘Try to learn a qigong that has nothing to do with religion or politics.’ The next day I saw a Falun Dafa flier in my mailbox. Imagine my surprise!” said Ms. Asako Tanimoto. “After reading the books Zhuan Falun and Falun Gong, I believed everything Master said was real, and this was what I was looking for. From then on I read the Falun Dafa books every day.

“I suffered for 49 years from severe headaches and stomachaches and I panicked easily. I once fainted due to a panic attack. None of these symptoms recurred after I began practicing. When I did the Falun Dafa exercises on April 7, 2021, my palms were red and itchy, like they’d been burned. Afterwards my panic attacks went away. It was like I’d been reborn!

“I thank Master for offering the teachings to the world, and I am grateful that I found Falun Dafa. I will follow the principles of Truthfulness-Compassion-Forbearance and treat others with kindness.” 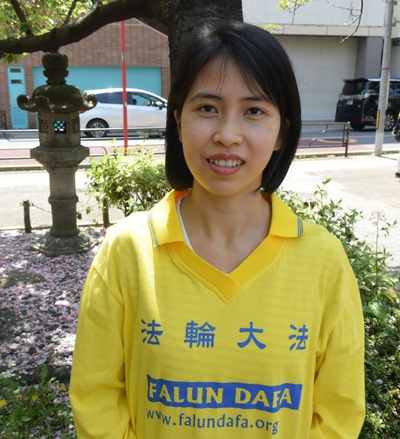 Ms. Thu Hang Duang came to Japan from Vietnam. She began practicing in 2020. “When I saw the exercise videos on social media, I was immediately drawn to Dafa. I learned the exercises by watching the videos,” she said. “I’d been sick since I was little. After I began practicing, I no longer thought about taking medications. Instead, I listened to Master’s lectures and I never got sick again. My eyes were healed,” she said.

With tears in her eyes, she continued, “I benefit from the practice a lot. My personal relationships improved. When I come across bad things, listening to Master’s lectures always brings me positive energy. I want to become a truly good person. Thank you, Master. I’m determined to cultivate myself.”