(Minghui.org) May 13 is World Falun Dafa Day and this year is the 30th anniversary of Falun Dafa’s introduction. Governor Glenn Youngkin of Virginia issued a certificate of recognition to recognize May 13 as Falun Dafa Day in the Commonwealth of Virginia. 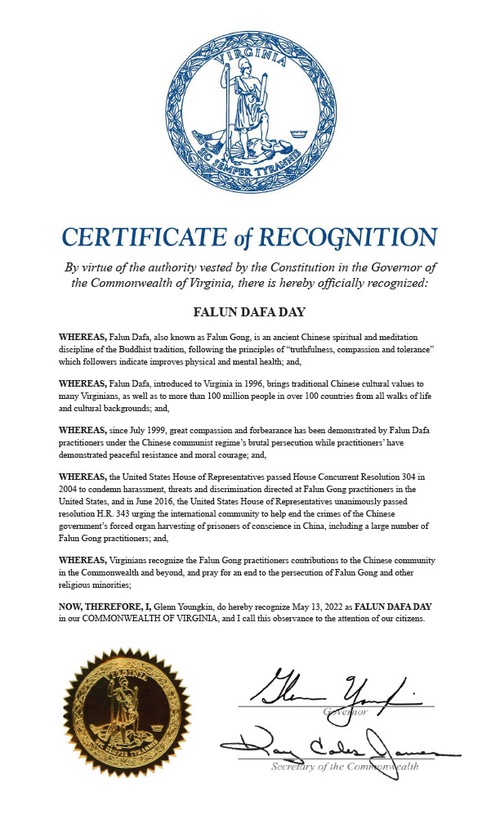 The certificate reads, “Falun Dafa, introduced to Virginia in 1996, brings traditional Chinese values to many Virginians, as well as to more than 100 million people in over 100 countries from all walks of life and cultural background; and,

“Since July 1999, great compassion and forbearance has been demonstrated by Falun Dafa practitioners under the Chinese communist regime’s brutal persecution while practitioners have demonstrated peaceful resistance and moral courage; and,

“The United States House of Representatives passed House Concurrent Resolution 304 in 2004 to condemn harassment, threats and discrimination directed at Falun Gong practitioners in the United States, and in June 2016, the United States House of Representatives unanimously passed] resolution H.R. 343 urging the international community to help end the crimes of the Chinese government’s forced organ harvesting of prisoners of conscience in China, including a large number of Falun Gong practitioners; and,

“Virginians recognize the Falun Gong practitioners’ contributions to the Chinese community in the Commonwealth and beyond, and pray for an end to the persecution of Falun Gong and other religious minorities.”

“84-year-old Woman Arrested and Had Her Home Ransacked”