(Minghui.org) Today's news from China includes incidents of persecution that took place in 11 cities or counties in 9 provinces, where at least 27 practitioners were recently persecuted for their belief. 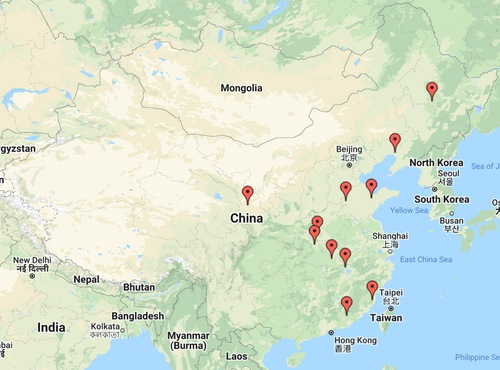 They were taken to the Jiuyuan Police Station. Mr. Zhen Guangtian was dragged to a place without surveillance cameras and beaten and verbally abused by Yao Shuangbin, deputy of the police station. The practitioners were not allowed to use the restroom while being detained in the police station. They were taken to the Dongmen Police Department in Shuangcheng City around 5 p.m. that evening.

Mr. Zhen was found to have tuberculosis and was denied admission by the detention center. He was fined 20,000 yuan and released. His car was confiscated. The 500 yuan in cash in his car was taken by officer Jia Feng from the Jiuyuan Police Station. Because he was harassed constantly, Mr. Zhen has to stay away from his home.

Mr. Chen Heng from Lianjiang County received a verdict from the Changle Court on March 30, 2022, stating that he was sentenced to four years in prison. Mr. Chen appealed to the intermediate court. His case was submitted to the Fuzhou City Intermediate Court by the Changle Court on April 11, 2022. His lawyer will review the case file on May 16, 2022.

Seven elderly practitioners including Ms. Qi Fangyun and Mr. Liu Yunchu were arrested on the morning of May 7, 2022. Four of them were released but the other three, all over 80, were taken to the Yusunshan Brainwashing Center.

Officers from the Anning Police Department went to Ms. Deng Fangying’s home at 3 p.m. on May 9, 2022. They arrested her and ransacked her home. Ms. Deng was released around midnight.

Ms. Li Xiumei, 71, was picked up by the police around 7 p.m. on February 18, 2022, and taken to the Huangpi Brainwashing Center. She was put in a room with three beds on the second floor. Three people took turns watching her. The hallway was under surveillance the entire time.

During the daytime, Ms. Li was taken to the first floor and forced to watch videos that slandered Falun Gong. She was pressured to write a guarantee statement not to practice Falun Gong.

Du Min (gender unknown) lives in the Cuinan Community in the Longtai District. Du was recently arrested by Huibin Police Station officers and is being held the No. 3 Detention House for one month.

Ms. Xing Ailing lives in Panpengdian Village, Bachalu Township. Officers from the Bachalu Township Police Station went to her home and arrested Ms. Xing and her nearly-80-year-old father on May 13, 2022.

Li Xuejun, head of the Domestic Security Division, and others from the Fancheng District Police Department, the Zhongyuan Police Station, the Railway Police Station, the local community office, and the local neighborhood committee went to Ms. Gao Fangrui’s home around 4 p.m. on May 12, 2022. They ransacked it and confiscated her Falun Gong books and other personal belongings. Ms. Gao was taken to the police station and later released.

Lai Zuolin from the Chengjiang Community in the Meixian District and others went to Ms. Liang Qiuping’s home before April 25, 2022, to pressure her family to get vaccinated. They photographed the posters and calendar in Ms. Liang’s home and reported to the Baohua Police Station. Lai Zuolin later called and threatened Ms. Liang’s non-practitioner family member.

Mr. Lai Jiefu was harassed at home by Luo Jinxing and other officers from the Baohua Police Station on May 6, 2022.

The police in the Hanting District harassed Falun Gong practitioners on May 10, 2022. Mr. Guan Lingji, Mr. Guan Yunlai, and Ms. Fu Xiuqin were harassed by officers from the Gaoli Street Police Station. The police confiscated copies of Minghui Weekly and an amulet from Ms. Guan Yunlai’s home.

Li Zhonghui was pressured to sign and give a fingerprint by a local community staff member and police officer Huang. After Li refused, they turned to Li’s family member. Because he was threatened with their grandson’s education and future, Li’s family member forced Li to sign and have his/her photo taken.