(Minghui.org) When former Chinese Communist Party (CCP) leader Jiang Zemin began to suppress Falun Gong in 1999, he created the extrajudicial 610 Office. Operating beyond the Chinese communist government network, this Gestapo-like agency is not restricted by the Constitution or existing laws and has unlimited access to resources.

For example, when family members of detained Falun Gong practitioners complained about the illegal measures being used in the Yunnan Second Women’s Prison, warden Yang Mingshan bluntly replied that they were following orders from the Yunnan 610 Office.

In addition, the 610 Office issued policies preventing Falun Gong practitioners and their children from joining the army, applying for civil service jobs, or becoming doctors, teachers, or officials. It also gave orders to employers to stop practitioners’ pensions, cancel their promotions, and even fire them.

According to data from Minghui, more than 2,000 Falun Gong practitioners in Yunnan Province have been arrested, harassed, imprisoned, brainwashed, sent to forced labor camps, or sentenced to prison. Among them, 473 were sent to labor camps and 547 were sentenced. Ms. He Lianchun from Mengzi City spend the longest time incarcerated—21 years. The oldest practitioner sentenced was 86-year-old engineer Mr. Li Peigao, who is still being detained. It is known that 59 practitioners died due to torture during custody. 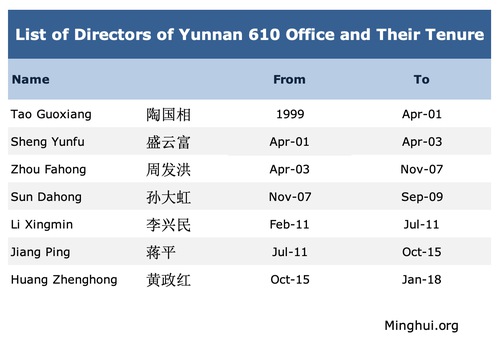 Before July 20, 1999, the Yunnan Provincial Party Committee of the Communist Party of China established the “Leading Group for Handling Falun Gong Issues,” headed by Wang Tianxi, Yunnan Deputy Party Secretary and Director of the Propaganda Department. Tao Guoxiang was appointed director of the 610 Office.

Tao Guoxiang, male, is in his 60s. Between 1999 and April 2001, he was the deputy director of the 610 Office of the Yunnan Provincial Party Committee (acting as director of the agency).

Tao actively implemented the persecution policy set forth by Jiang Zemin, the then CCP leader. More specifically, he led at least two campaigns against Falun Gong.

In a meeting of local leaders held by the Yunnan Provincial Party Committee on July 22, 1999, Tao and the 610 Office required officials to “guard their own door and manage their own people” to “combat” Falun Gong. Their strategy was “early identification, early control, and early dissolution.” In addition to threatening practitioners with the loss of their jobs and pensions and demotions, they confiscated Falun Gong books and materials, pressuring practitioners to renounce their belief.

After Jiang’s claim that Falun Gong would be “eradicated in three months” failed, the Yunan 610 Office held a conference in November 1999 on “banning Falun Gong” in the province. In this second wave, Tao and the 610 Office ordered the police and political and legal systems to work together to stamp out Falun Gong. As the suppression of Falun Gong in Yunnan escalated, more than 100 practitioners were arrested and taken to labor camps in April 2000 alone.

During Tao’s tenure as director of the 610 Office for over a year, thousands of Falun Gong practitioners were arrested in Yunnan. Hundreds of them were sent to brainwashing sessions, 180 were sent to labor camps, 37 were sentenced, and many died.

After the CCP formally announced the start of the persecution on July 22, 1999, there were massive arrests of practitioners who were outside doing the exercises, appealing for Falun Gong practitioners at government agencies in Yunnan, or traveling to Beijing to appeal. Hundreds of practitioners were arrested, detained, or sent to brainwashing centers with homes ransacked.

During the World Expo in October 1999, Falun Gong practitioners were closely monitored. Several were arrested on October 31 for exposing the persecution during the Expo, including Liang Dong, Jiang Mingfeng, Zhang Weijin, Huang Wudi, Wu Gang, and Zuo Lixin. Liang Dong was illegally sentenced to three years in prison, making him the first practitioner sentenced in Yunnan. Several were taken to labor camps for two-year terms, including Jiang Mingfeng and Zhang Weijin.

In 2001, Tao spent about a million yuan on satellite ground stations to arrest Falun Gong coordinators such as Wang Lan.

The Yunnan 610 Office created a group of “experts” to “transform” practitioners (that is, force them to renounce their beliefs). Besides “transforming” detained practitioners, they gave at least 62 speeches attended by 63,000 people in 11 cities. These events were widely publicized in the media to incite hatred for Falun Gong.

In September and November 2000, the Yunnan 610 Office spent large sums of money to invite “experts” from the notorious Masanjia Forced Labor Camp to teach the locals strategies to defeat Falun Gong. Besides providing training in prisons and labor camps, these “experts” organized 24 brainwashing sessions in numerous cities including Kunming, Honghe, Qujing, Yuxi, and Wenshan.

One example was Xie Hongyu, a 22-year-old college student from the renowned University of Science and Technology of China. The university made his father come and get him. Back home, local officials made him go to brainwashing sessions in Kunming. Systematically hounded by the province, city, county, township, and village-level 610 Offices, he developed a mental disorder and died on August 23, 2001.

When the CCP rolled out the staged Self-immolation Incident in Tiananmen Square in 2001 to defame Falun Gong, Sheng launched the third campaign to combat Falun Gong. Besides inciting hatred of Falun Gong, he directed large-scale arrests of practitioners. Many were sent to labor camps or imprisoned.

In 2001, the provincial 610 Office organized large-scale exhibitions to defame Falun Gong. They were held in over 100 counties and cities and were attended by more than eight million people.

During Zhou Fahong's tenure as director of the Provincial 610 Office for more than four years, he directed the suppression of Falun Gong and carried out so-called special activities through the police system. During that time, 183 practitioners in Yunnan were sent to labor camps and over 100 were sentenced. More than 10 practitioners lost their lives due to the persecution, including Yang Suhong, Shi Xizhi, Gui Mingfen, Zhang Fengxian, Li Xuefen, and Zhang Guifang.

After the Epoch Times published the Nine Commentaries on the Communist Party in late 2004, the Yunnan 610 Office actively implemented the secret persecution orders of Jiang Zemin’s regime. As the persecution intensified, over 200 practitioners were arrested, sent to labor camps, or sentenced between 2004 and 2005 alone.

Sun Dahong, male, served as the director and Party secretary of the Yunnan Provincial 610 Office from November 2007 to September 2009. He was the deputy director of the Public Security Department of Yunnan at the time.

Before the 2008 Olympic Games in Beijing, the Central Political and Legal Affairs Committee (PLAC) issued a document entitled “Effectively Maintaining Social Stability and Ensuring the Safety of the Beijing Olympics." Sun followed closely and escalated the persecution. Government agencies and employers monitored and tracked practitioners closely.

Xian Yanming, male, was born in November 1953 and served as director of the 610 Office of the Yunnan Province between October 2009 to January 2011. During that time, he directed the arrests and detentions of practitioners.

At about 2:00 a.m. on April 13, 2011, police officers Zhang Zhizhong and Wang Renpu from Zhenxiong County Police Department arrested practitioners Long Ancheng, Zhang Chaoxuan, Long Anjun, and others. Their homes were ransacked and Long Ancheng was sent to a forced labor camp.

On August 27, 2011, a massive arrest took place under the command of the Kunming 610 Office and Kunming police. Wu Yun, Zhang Shuilan, Shen Zhuyou, and Han Shulin were a few of those arrested. Some of them were later sentenced.

On March 22 and 23, 2011, under the command of the Qujing 610 Office and Qujing police, five practitioners were arrested and their homes ransacked, including Huang Xilan, Rao Xue, and Liang Guofen.

On July 3, 2011, under orders from the Honghe 610 Office, police from Gejiu City, Mengzi City, and Kaiyuan City arrested many practitioners and ransacked their homes. They included Li Ming and Liu Yan (a married couple), Cui Lin, Wang Lanfen, Chen Xiangzhen, Jiang Yuhua, Chang Ping, Wan Qiong, Ma Guozhong, and others. This was the fourth time that Liu Yan, 47, an employee of the Honghe Water Conservancy Bureau, was arrested. She was sentenced to ten years in prison. 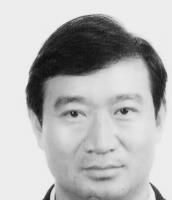 Five months after Li Xingmin took office, he intensified the persecution in Yunnan Province. Practitioners were monitored, harassed, and arrested, their homes were ransacked and their property confiscated. In less than six months, over 80 practitioners were arrested, detained, sent to labor camps, or sentenced. Brainwashing sessions were organized to “transform” all practitioners in Yunnan within three years.

Jiang Ping, male, was born on November 6, 1955. Between July 2011 and October 2015, he served as director of the Yunnan 610 Office. During that time, the persecution in Yunnan was worse than before.

Since July 7, 2011, he has been the director of the Provincial Party Committee's 610 Office and secretary of the Party Leadership Group. It was a period when the suppression and persecution of Falun Gong in Yunnan were more serious. During the 18th National Congress of the Communist Party of China in November 2012 and the World Falun Dafa Day celebration in May 2012 alone, dozens of practitioners were arrested and sentenced. Some lost their lives due to the suppression.

In 2013, more than 60 practitioners were arrested in Yunnan Province and 29 were sentenced. In addition, dozens of people were illegally searched and harassed. Three died due to torture during detention.

In the first half of 2014, 65 practitioners were arrested and detained, Moreover, 36 were tried, 22 were sentenced, and 44 were harassed and had their homes ransacked.

In 2016 alone, a total of 115 practitioners were persecuted in Yunnan Province. Among them, 27 were harassed, 20 were arrested, 18 were detained, and 19 were tried and sentenced. In 2017, the number increased to 118, with 17 being sentenced, 55 arrested, and 45 harassed. One practitioner died because of the persecution.

These accounts summarize the heavy involvement of the 610 Office in the suppression of Falun Gong in Yunnan Province. In many instances, the practitioners and their family members lost their jobs and their families were torn apart simply because practitioners wanted to be better people following the principles of Truthfulness-Compassion-Forbearance.

“Let Go of the Confrontational Mindset to Defuse Family Tensions”

“How I Found a Deeply Hidden Attachment”