(Minghui.org) On May 14, 2002, to celebrate World Falun Dafa Day and Master Li’s birthday, practitioners in the French-speaking part of Switzerland held a group practice in Geneva. 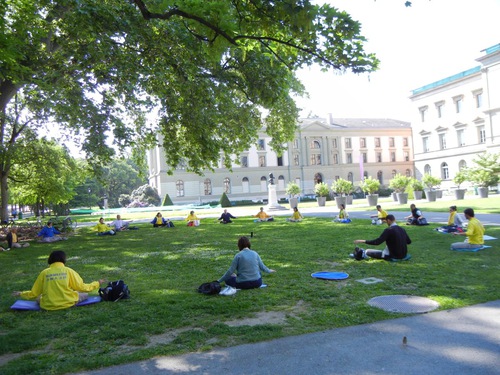 Practitioners from the French-speaking part of Switzerland demonstrated the Falun Dafa exercises in a park in Geneva on May 14, 2022 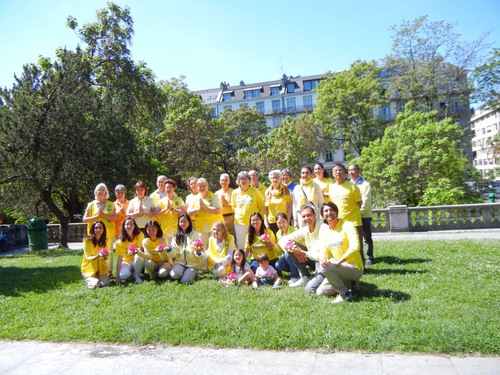 As part of the day’s events, practitioners took a group photo to wish Master Li a happy birthday! They are grateful to Master Li for His merciful salvation.

Practitioner from Vietnam: Pondering the Meaning of Life

Ms. Tong from Vietnam talked about her experience. Her eldest sister in Vietnam became seriously ill but couldn’t get any medical help. A friend of hers told her about Falun Dafa and she recovered soon after she began practicing. She urged her family to practice Falun Dafa.

But Ms. Tong didn’t feel it was important until she went back to Vietnam to visit her family, and her oldest sister gave her a copy of Zhuan Falun. When she returned to Switzerland, she began reading Zhuan Falun to see what Falun Dafa was, but when she got to Lecture Five, she suddenly felt something was spinning in her lower abdomen. The amazing phenomenon prompted her to finish reading the book.

Ms. Tong felt that Falun Dafa was not an ordinary qigong that dispels illnesses and keeps people fit, it got her to start thinking about the meaning of life. From then on, Ms. Tong embarked on the path of practicing Falun Dafa.

One western practitioner said he used to practice a qigong, but didn’t feel much. After he began practicing Falun Dafa, he said the energy was very pure and calm. He felt all his meridians were opened and something was spinning at his lower abdomen, which drove the sensation throughout his body.

He said he also became much calmer. His mother used to say things that hurt his feelings, but after he began practicing Falun Dafa, when she said the same things, it no longer bothered him.

When he first came to the Falun Dafa practice site, he brought a high stool to sit on because his leg was injured. After a few days of practice, he replaced the high stool with a lower one; and after a few more days, he was able to sit on the ground directly to practice.

Another Western practitioner, Alex, had an injury to his right arm and it was bruised and painful for years. After he began to practice, he did not think about the injury, but focused on learning the exercises. Sometimes he felt his arm was burning inside and uncomfortable, but he persisted.

One day he realized that he no longer felt any discomfort in his right arm and the purple mark on the outside disappeared.