(Minghui.org) On May 13 and 14, 2022, Falun Dafa (also known as Falun Gong) practitioners in Sweden gathered at the Royal Garden in Stockholm to celebrate the 23rd World Falun Dafa Day and the 30th anniversary of Falun Dafa’s public introduction.

Practitioners did the exercises, displayed posters, and performed waist drum dances to showcase the beauty of Falun Dafa and celebrate Master Li’s 71st birthday, expressing their endless gratitude to Him. 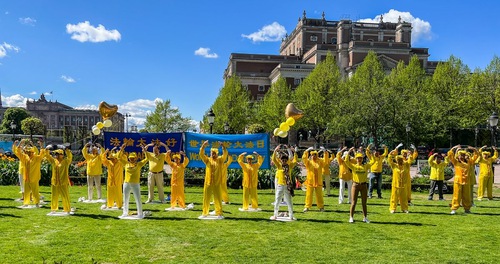 On May 13 and 14, 2022, practitioners celebrated World Falun Dafa Day and the 30th anniversary of Falun Dafa’s public introduction at the Royal Garden in Stockholm. Practitioners demonstrated the exercises. 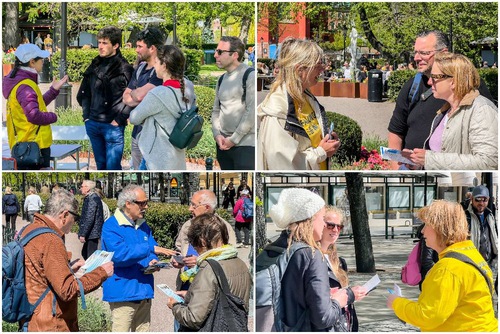 People stopped to listen and were shocked to learn about the persecution happening in China. Many people signed a petition calling for an end to the persecution and condemning the Chines Communist Party’s (CCP’s) atrocities. 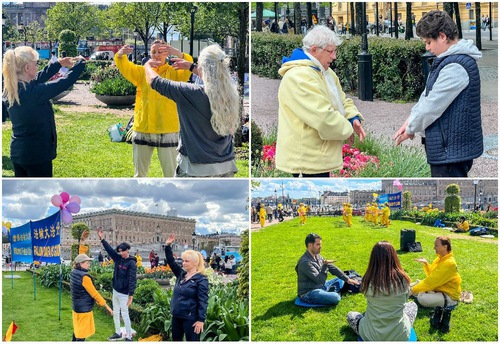 People were interested in Falun Dafa and some learned the exercises on the spot. 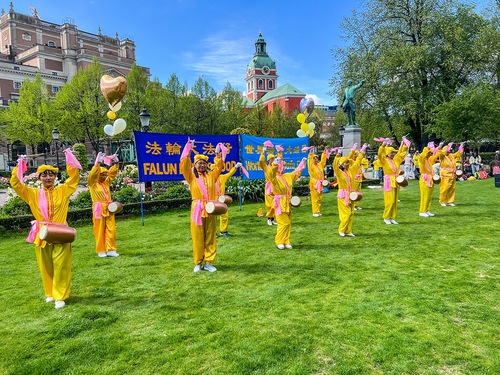 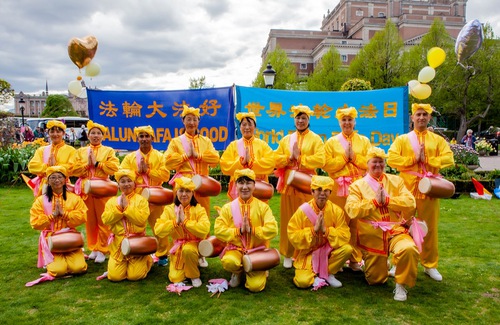 For practitioners, Falun Dafa Day is a magnificent holiday because practicing Falun Gong has been extremely beneficial to their physical and mental health. Sixteen Swedish officials sent congratulatory letters to practitioners, congratulating them on the 30th anniversary of Falun Dafa’s public introduction and praising Falun Dafa’s contribution to society in advancing multiculturalism, kindness, and peace.

These two days, beautiful tulips were in full bloom in the Royal Garden, and tourists flocked to see them. Practitioner’s peaceful exercise demonstrations and festive waist drum performances attracted many people to stop and watch. They took photos and videos and had in-depth conversations with practitioners.

People were shocked to learn about the persecution happening in China, and signed a petition calling for an end to the persecution and condemning the CCP’s atrocities. Many people were particularly interested in Falun Dafa and learned the exercises.

Through speakers, practitioners introduced Falun Dafa to the crowd: Falun Gong is based on the universal principles of Truthfulness-Compassion-Forbearance and originated in China. It was introduced to the public 30 years ago, uplifting people’s morals and their physical and mental health.

Practitioners also shared their gratitude and joy over the 27th anniversary of Falun Gong’s arrival in Sweden.

In April 1995, Dr. Wang, a Chinese medicine doctor in Gothenburg, had the honor of inviting Master Li Hongzhi to Sweden to give a lecture.

Recalling that time, she said with emotion, “Master cherishes every single practitioner, and I am unable to describe Master’s great compassion in words. Master was extremely approachable, and His attitude and patience towards practitioners left a deep impression on us all, which we will never forget.”

Twenty-seven years later, Pirjo, a senior registered nurse at Gothenburg Hospital who was fortunate enough to attend the seven-day lecture given by Master Li Hongzhi in Gothenburg, still recalls being blown away by that experience.

She said, “I remember during the lecture, Master Li told everyone to think about the areas of their body that were ill or problematic. At that time, I had been having back pain for more than two years and had trouble sleeping at night. As I was thinking about this, I suddenly felt a gust of wind entering my body from my back. I immediately felt lighter and my years of pain disappeared instantly.

“I experienced the power of Dafa firsthand and will forever remember that wonderful time.” 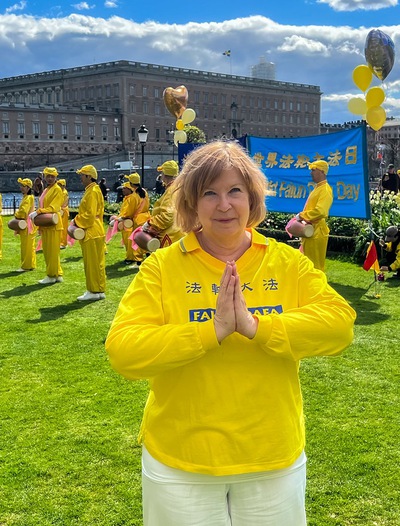 “Master Li is especially considerate of us Westerners, and never tired of answering our questions, even some stupid ones, with great patience. I have been practicing for 27 years now, and Master has been protecting me with immeasurable compassion and encouraging me to advance. My heart is full of gratitude.”

She continued, “Practitioners, like other people, encounter all kinds of conflicts and difficulties. But the difference is that in difficult situations, we treat others with compassion and forgive them, and do not seek revenge on them. Falun Dafa taught me to always do this.”

The kindhearted Swedish people recognize the principles of Truthfulness-Compassion-Forbearance, and Falun Dafa has been spreading widely in Sweden by word of mouth alone. To date, there are practice sites in many cities, and many people have joined the practice of Falun Dafa, conducting themselves according to the principles of Truthfulness-Compassion-Forbearance, and constantly improving themselves.

Young Practitioner: Now I Understood the True Meaning of Life

Twenty-nine-year-old Marco is Romanian. He is a software engineer and was brought up in a family that believes in the existence of God and Buddha. He came to Linköping, Sweden in March 2016 to start a new job. Through a colleague, he learned about Falun Dafa. 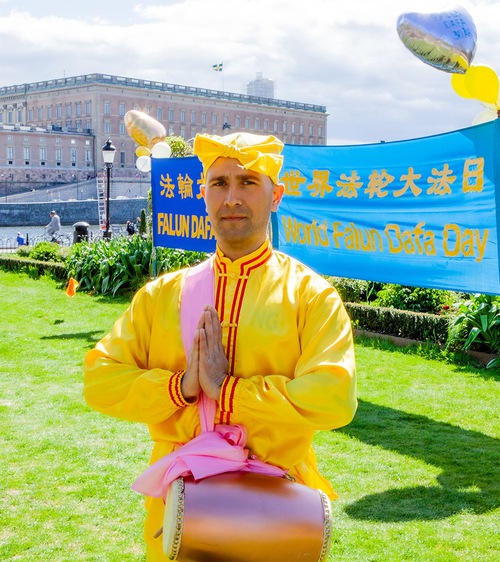 Marco, a software engineer in Sweden, thanks to Master for His grace! He wants to be diligent and conduct himself following Truthfulness-Compassion-Forbearance, and be a genuine practitioner of Falun Dafa.

Marco said, “When I first heard the words Truthfulness-Compassion-Forbearance, I felt like an electric plug powered on, that no one could stop me from living these principles. Although I didn’t understand the principles very well at that time, I came to understand the true meaning of life, and I believed I should follow these principles to better myself. I borrowed Falun Dafa books and quickly joined a local group for Fa study and began to practice.”

“I knew Falun Dafa was good, but I don’t think I was merged in the Fa at the time, in other words, I didn’t truly practice cultivation. I returned the Falun Dafa books to my colleagues in only six months. Then things started to happen one after another at work and in life, but to my surprise, amid pressures from all aspects, I still remembered Truthfulness-Compassion-Forbearance.

“It was Master Li and Falun Dafa that helped me get out of my troubles little by little.”

In June 2018, Marco moved to Stockholm due to a change in his job. After careful reflection, he started reading Falun Dafa books again, and kept doing Fa study and exercises, as well as visiting Falun Dafa websites every day. He said, “I have gained wisdom from Falun Dafa books, and was able to get along with others. Doing the exercises made me feel energetic and relaxed, it was wonderful.”

Marco said, “I feel guilty that I didn’t cherish enough everything Master has given me, and wasted a lot of precious time. I hope to be diligent, and I will do my best to conduct myself following the principles of Truthfulness-Compassion-Forbearance, and be a genuine disciple of Master Li.”

One of the gentlemen told the practitioner that he was interested in qigong and had seen practitioners clarifying the truth and doing exercises in Mynttorget next to the Swedish parliament building many times. He was deeply impressed by the beauty of Truthfulness-Compassion-Forbearance.

He then introduced the other gentleman to the practitioner, “This is a friend of mine. He is very good, but he is a heavy smoker and has a bad temper. Seeing you here today, I suggested he practice Truthfulness-Compassion-Forbearance. We both want to learn Falun Dafa.”

The younger gentleman said, “Yes! I have a terrible temper, and I tend to lash out when things go wrong; I have been unsuccessful in quitting smoking many times. Now I want to practice Truthfulness-Compassion-Forbearance, especially Forbearance. I want to get rid of my bad temper.”

The practitioner told them that the practice is good for all ages, that it not only strengthens the body and keeps people healthy, but also teaches people to conduct themselves following the principles of Truthfulness-Compassion-Forbearance to become a better person.

The practitioner said even though they might find it challenging in the beginning, gradually they will get it, because people were able to remove their long-term drug addiction after practicing Falun Gong, let alone quitting smoking. Many practitioners have personal experience in this regard.

The practitioner told them they can find all the information they need online at www.falundafa.org and told them there is a practice site in downtown Stockholm where practitioners do exercises together every Sunday and they can learn the exercises for free. The two gentlemen listened attentively and said they will make sure to try it.

Students from China: We Were all Deceived by the CCP

Two female students from China saw the festive and peaceful scene and were shocked. One of them asked in amazement with wide eyes, “How come there are Falun Dafa practitioners everywhere outside China? What about the Tiananmen Self-immolation?”

Mr. Li, a practitioner originally from Beijing told them the “Self-immolation” was staged by the CCP to frame Falun Dafa in order to incite hatred towards it.

Mr. Li said, “Think about it, for such an emergency, who could find so many fire extinguishers so quickly, and have multiple cameras in position? The man whose name was Wang Jindong, had his clothes burned while wearing them. But how could the Sprite bottle full of gasoline be still intact between his legs? As to the little girl, how could she sing loudly and clearly with her trachea cut?”

Mr. Li continued, “I was a person on the brink of paralysis, and after all the major hospitals failed to cure me, I got better in less than a month after practicing Falun Dafa. The CCP forbade me to practice it. I refused so they put me under surveillance.

“The staged self-immolation took place on Chinese New Year’s Eve, I was told early that morning that I could not go anywhere that day and that Chang’an Street was under martial law from 10:00 a.m. to 4:00 p.m. Then how did the five people manage to get into the Square after 2 p.m.? Obviously, it was all staged, you must find out the truth now that you have made it out of China.”

The two girls kept nodding and one said, “We didn’t know anything about this.” The other one said, “What we heard in China about Falun Dafa was all negative, and it was written in textbooks. After a lie is told three times it’s considered the truth. If I hadn’t run into you in person, I would still believe the CCP’s propaganda.”

One of the girls agreed to quit the Communist Youth League and the Young Pioneers under the pseudonym “Ruixin” on the spot, while the other girl took the truth-clarification materials and said she would go online to get more details. They were happy when they left, and said repeatedly, “Now we know we have been deceived by the CCP.”