(Minghui.org) On the grand occasion of the 30th anniversary of Falun Dafa's introduction to the public, Missouri Governor, Secretary of State and a Congresswoman sent greeting letters celebrating Falun Dafa’s contribution to society and commending practitioners for the courage and perseverance they demonstrated in peacefully resisting the persecution by the Chinese Communist Party. The Missouri House of Representatives and Senate also issued resolutions to recognize the positive impact the practice has brought to the world. 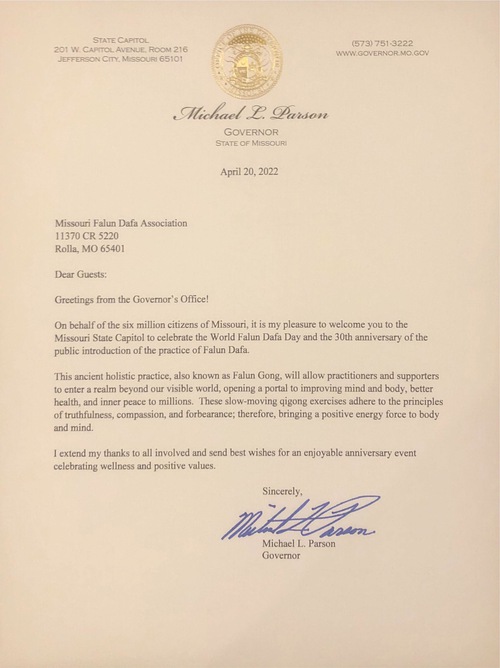 Greetings from the Governor's Office!

On behalf of the six million citizens of Missouri, it is my pleasure to welcome you to the Missouri State Capitol to celebrate the World Falun Dafa Day and the 30th anniversary of the public introduction of the practice of Falun Dafa.

This ancient holistic practice, also known as Falun Gong, will allow practitioners and supporters to enter a realm beyond our visible world, opening a portal to improving mind and body, better health, and inner peace to millions.

These slow-moving qigong exercises adhere to the principle of truthfulness, compassion, and forbearance; therefore, bringing a positive energy force to bodyand mind.

I extend my thanks to all involved and send best wishes for an enjoyable anniversary event celebrating wellness and positive values. 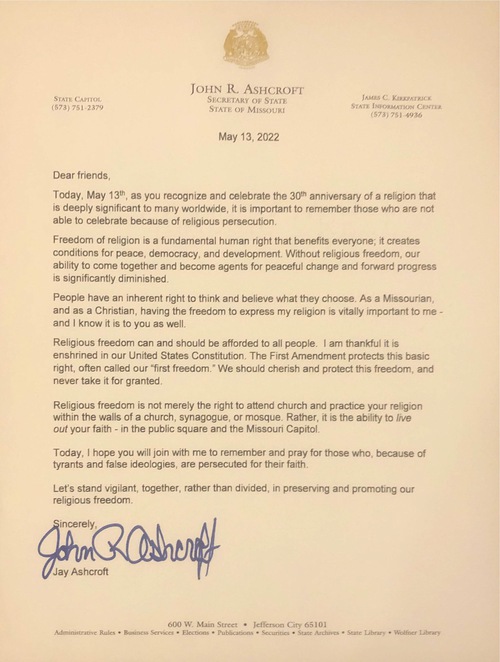 Today, May 13th, as you recognize and celebrate the 30th anniversary of a religion that is deeply significant to many worldwide, it is important to remember those who are not able to celebrate because of religious persecution.

Freedom of religion is a fundamental human right that benefits everyone: it createsconditions for peace, democracy, and development. Without religious freedom, ourability to come together and become agents for peaceful change and forward progress is significantly diminished.

People have an inherent right to think and believe what they choose. As a Missourian, and as a Christian, having the freedom to express my religion is vitally important to me and I know it is to you as well.

Religious freedom can and should be afforded to all people. I am thankful it isenshrined in our United States Constitution. The First Amendment protects this basic right, often called our "first freedom." We should cherish and protect this freedom, and never take it for granted.

Religious freedom is not merely the right to attend church and practice your religion within the walls of a church, synagogue, or mosque. Rather, it is the ability to live out your faith - in the public square and the Missouri Capitol.

Today, I hope you will join with me to remember and pray for those who, because of tyrants and false ideologies, are persecuted for their faith.

Let's stand vigilant, together, rather than divided, in preserving and promoting ourreligious freedom. 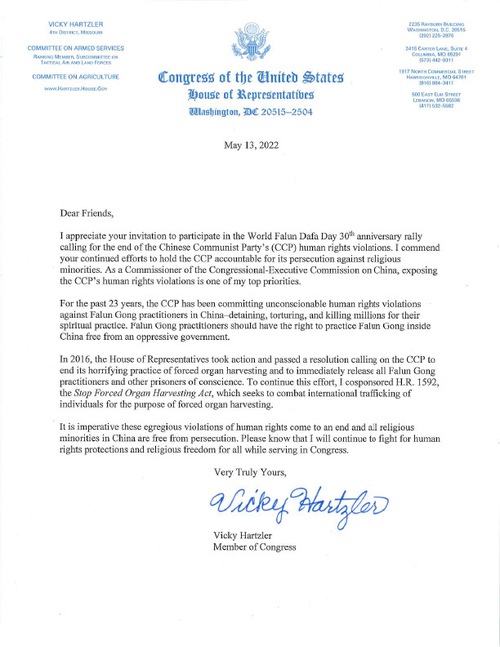 I appreciate your invitation to participate in the World Falun Dafa Day 30 anniversary rally calling for the end of the Chinese Communist Party's (CCP) human rights violations. I commend your continued efforts to hold the CP accountable for its persecution against religious minorities. As a Commissioner of the Congressional-Executive Commission on China, exposing the CC's human rights violations is one of my top priorities.

In 2016, the House of Representatives took action and passed a resolution calling on the CCP to end its horrifying practice of forced organ harvesting and to immediately release all Falun Gong practitioners and other prisoners of conscience. To continue this effort, I cosponsored H.R. 1592, the Stop Forced Organ Harvesting Act, which seeks to combat international trafficking of individuals for the purpose of forced organ harvesting.

It is imperative these egregious violations of human rights come to an end and all religious minorities in China are free from persecution. Please know that I will continue to fight for human rights protections and religious freedom for all while serving in Congress. 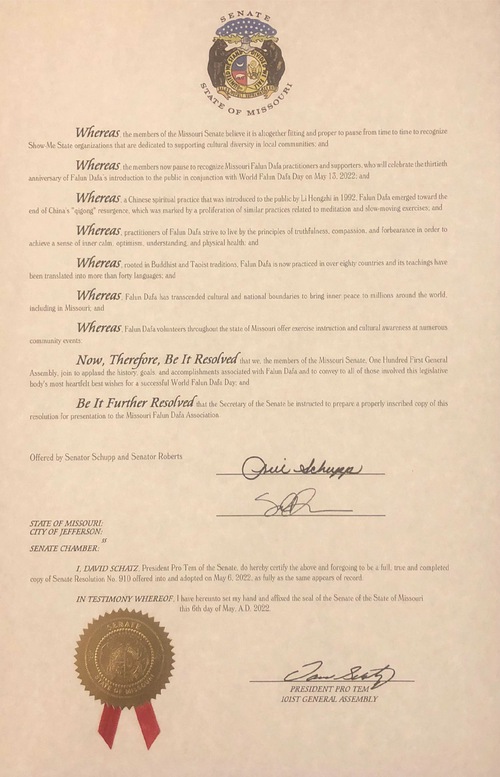 Whereas, the members of the Missouri Senate believe it is altogether fitting and proper to pause from time to time to recognize Show-Me State organizations that are dedicated to supporting cultural diversity in local communities; and

Whereas, the members now pause to recognize Missouri Falun Dafa practitioners and supporters, who will celebrate the thirtieth anniversary of Falun Dafa’s introduction to the public in conjunction with World Falun Dafa Day on May 13, 2022; and

Whereas, a Chinese spiritual practice that was introduced to the public by Li Hongzhi in 1992, Falun Dafa emerged toward the end of China’s “qigong” resurgence, which was marked by a proliferation of similar practices related to meditation and slow-moving exercises; and

Whereas, practitioners of Falun Dafa strive to live by the principles of truthfulness, compassion and forbearance in order to achieve a sense of inner calm, optimism, understanding, and physical health; and

Whereas, rooted in Buddhist and Taoist traditions, Falun Dafa is now practiced in over eighty countries and its teachings have been translated into more than forth languages; and

Whereas, Falun Dafa has transcended cultural and national boundaries to bring inner peace to millions around the world, including in Missouri; and

Whereas, Falun Dafa volunteers throughout the state of Missouri offer exercise instruction and cultural awareness at numerous community events;

Now, Therefore, Be It Resolved that we, the members of the Missouri Senate, One Hundred First General Assembly, join to applaud the history, goals, and accomplishments associated with Falun Dafa and to convey to all of those involved this legislative body’s most heartfelt best wishes for a successful World Falun Dafa Day; and

Be It Further Resolved that the Secretary of the Senate be instructed to prepare a properly inscribed copy of this resolution for presentation to the Missouri Falun Dafa Association.

Resolution from Missouri House of Representatives 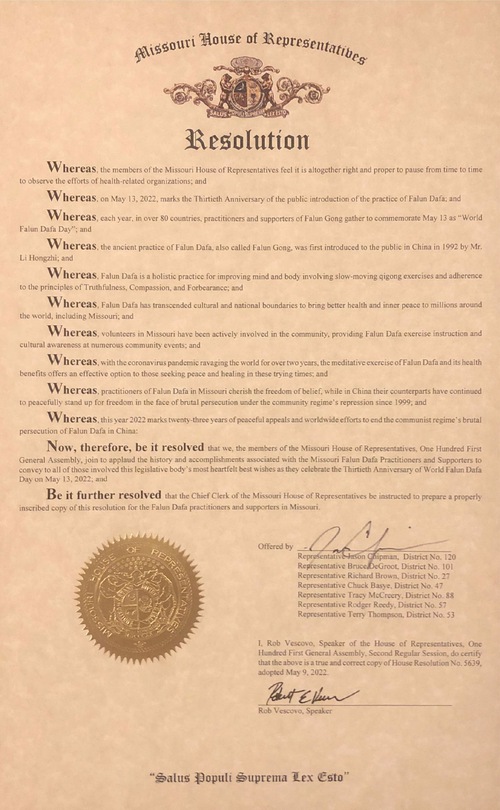 Whereas, the members of the Missouri House of Representatives feel it altogether right and proper to pause from time to time to observe the efforts of health-related organizations; and

Whereas, on May 13, 2022, marks the Thirtieth Anniversary of the public introduction of the practice of Falun Dafa; and

Whereas, each year, in over 80 countries, practitioners and supporters of Falun Gong gather to commemorate May 13 as “World Falun Dafa Day”; and

Whereas, the ancient practice of Falun Dafa, also called Falun Gong, was first introduced to the public in China in 1992 by Mr. Li Hongzhi; and

Whereas, Falun Dafa is a holistic practice for improving mind and body involving slow-moving qigong exercises and adherence to the principles of Truthfulness, Compassion, and Forbearance; and

Whereas, Falun Dafa has transcended cultural and national boundaries to bring better health and inner peace to millions around the world, including Missouri; and

Whereas, volunteers in Missouri have been actively involved in the community, providing Falun Dafa exercise instruction and cultural awareness at numerous community events; and

Whereas, with the coronavirus pandemic ravaging the world for over two years, the meditative exercise of Falun Dafa and its health benefits offers an effective option to those seeking peace and healing in these trying times; and

Whereas, practitioners of Falun Dafa in Missouri cherish the freedom of belief, while in China their counterparts have continued to peacefully stand up for freedom in the face of brutal persecution under the communist regime’s repression since 1999; and

Whereas, this year 2022 marks twenty-three years of peaceful appeals and worldwide efforts to end the communist regime’s brutal persecution of Falun Dafa in China;

Now, therefore, be it resolved that we, the members of the Missouri House of Representatives, One Hundred First General Assembly, join to applaud the history and accomplishments associated with the Missouri Falun Dafa Practitioners and Supporters to convey to all of those involved this legislative body’s most heartfelt best wishes as they celebrate the Thirtieth Anniversary of World Falun Dafa Day on May 13, 2022l; and

Be it further resolved that the Chief Clerk of the Missouri House of Representatives be instructed to prepare a properly inscribed copy o this resolution for the Falun Dafa practitioners and supporters in Missouri.

“Ontario, Canada: Proclamations and Flags Raised in Celebration: “Truthfulness-Compassion-Forbearance is the Way to Keep Peace During the Pandemic””