Home > Persecution > Torture > Torture of Women
Woman Detained in Secret Location After Police Show up in Her Bedroom at Midnight
May 16, 2022 | By a Minghui correspondent in Hebei Province, China

(Minghui.org) A 53-year-old woman woke up from a sound sleep to find a dozen police officers in her bedroom at midnight on January 10, 2022. The police took her to an unknown location with her head covered and hands cuffed for two weeks before she was released on January 24.

Ms. He Honggai, a resident in Shenze County, Shijiazhuang City, was targeted for upholding her faith in Falun Gong, a meditation practice that has been persecuted in China since July 1999. That same night the police arrested 17 other local practitioners in a sting operation to persecute Falun Gong. While detained, Ms. He suffered irregular heartbeat, hypertension, and chest pain, and the police did not seek medical help for her. The following is Ms. He’s account of what happened to her.

==================================The noise of people shouting woke me up in the middle of the night on January 10, 2022. I woke up to over 10 uniformed policemen in my bedroom. One of them yelled for me to put my clothes on. They wanted me to go to Shenze County Police Department. When I demanded to know which law I had allegedly broken that led them to my home, they told me that they would tell me at the police department. I refused to go with them since I broke no law. One of them warned, “If you refuse to go, you are obstructing us police officers.”

I did not want to change in front of the male officers and they called in a policewoman. She had her video camera on the whole time, even when I took my pajamas off. As soon as I had my shoes on, six men came in and handcuffed my hands behind my back.

They held my husband, Liu Jingbo, down on the sofa. My husband accused the police of not treating me properly. The police threatened him, “You also work in a public office, and you better cooperate.” The six men carried me out by holding the handcuffs and my legs upward, like carrying an animal. The handcuffs cut into my wrists and I screamed because of the pain. My legs and shoulders hurt days after that.

As soon as they took me outside, I shouted, “Dear neighbors, gangsters are here kidnapping good people!” They threw me into a police vehicle and put a black hood over my head. The hood had no holes and I could barely breathe.

None of the police showed their badges or a search warrant. They never went through the list of items they confiscated from my house with me, nor did they issue me an official receipt of the confiscated items.

At the Shenze County Police Department, the police bound me to a metal chair. Two hours later two officers tried to interrogate me. I couldn’t utter a word as I was in shock. The next day three officers interrogated me for 15 hours while I was restrained to the metal chair. That night the police put the head cover back on me and put me in a van with several others. The police took us to a hotel and, without taking off the cover and handcuffs, bound me to a metal chair again. 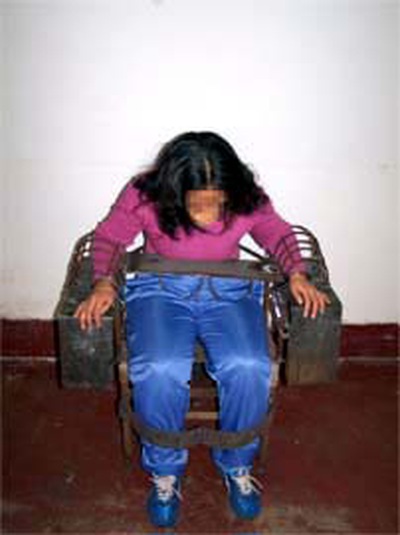 I couldn’t tell if it was day or night because my head was covered the whole time, and the light in the room was on while the curtains were down. I believe I sat on the metal chair for four days before they removed me from the chair and put me in another room, where I was held with about ten other people, whom I believe were the practitioners arrested the same day as me. Everyone had a hood and handcuffs on. No one was allowed to talk. We could only sit and occasionally lay down on the floor, which was padded with foam. I spent ten more days in this room. I had irregular heart beat and chest pain, yet the police did not allow me to seek medical attention.

The police interrogated me twice in the hotel room. They didn’t wear the uniforms, nor did they show their badges, reveal their names, read me my rights, or show me a subpoena.

For 14 days in the hotel, the police never took my hood or handcuffs off. On January 24, a secretary from Lijiazhuang Village picked me up and took me home. Before they released me, they had me sign a document saying that I had 60 days to request an administrative review of the arrest, and six months to file a complaint with the court.

More Details of the Mass Arrest

The 18 practitioners arrested on January 10, 2022 came from different parts of Shenze County. The following is the list by region.

Ms. He Xiuling was released on January 14, a few days after the arrest, because she suffered hypertension. After being detained in the hotel, seven of the practitioners, including Ms. He Hongyan, Ms. Liu Xiaomiao, Ms. Zhang Huixin, Ms. Liu Yuru, Ms. Jiao Yaqin, Ms. Ma Tongxin, and Ms. Tian Xuan, were transferred to Shijiazhuang City Second Detention Center. Mr. Du Guofang and Mr. Liu Chengwu were transferred to Jinzhou City Detention Center. All of them were released before or on January 27.

It is said that Shijiazhuang City Police Department ordered the mass arrest, which was carried out by officers from Shenze County Police Department and the local police stations. A police officer who participated in the arrest said that they received an order to carry out an operation that night but weren’t told the specifics. All of the officers’ cell phones were confiscated to prevent leaks. The officers did not know that they had to arrest Falun Gong practitioners until they got to their homes. The police carried loaded guns, and they showed up at or after midnight because the targeted practitioners were definitely home by then and they didn’t want to alarm the neighbors.