Home > About Dafa > Health Benefits
Gratitude from Singapore: Falun Dafa Offers a New Lease on Life
May 15, 2022 | By a Falun Dafa practitioner in Singapore

(Minghui.org) In the golden month of May the world celebrates World Falun Dafa Day. This May 13, 2022, was the 30th anniversary of the day that Falun Dafa was introduced to the world and also the 71st birthday of its founder, Mr. Li Hongzhi. With hearts full of gratitude for Master and Dafa, three practitioners in Singapore shared their experiences of how they began practicing and benefited both physically and mentally. They hope that more people throughout the world will know: “Falun Dafa is good, Truthfulness-Compassion-Forbearance is good.” 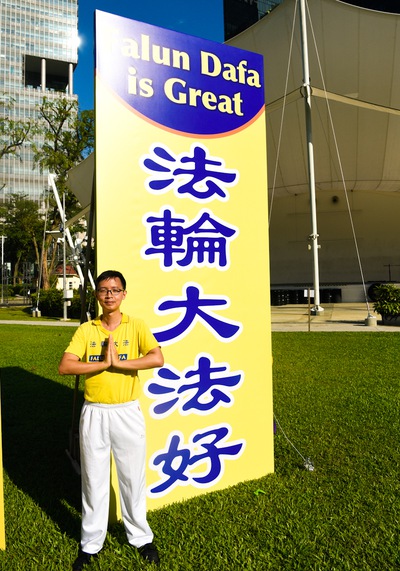 After he began practicing Falun Dafa seven years ago, 42-year-old Jing An, a software development engineer, said that many of his health issues were resolved. He might seem like a young man full of spirit and energy now, but when he was 30 years old he’d been tortured by eczema for more than 10 years. “I had been applying medication to inhibit the onset of the outbreaks but that just served as a temporary measure. Applying the medicine for prolonged periods of time also caused side effects.”

At the end of 2014, Jing An, who was in Australia at the time, decided to stop using the medication and try other things. The eczema broke out, and big patches of his skin turned scaly and itched. Pus also oozed from these areas, making it hard for him to fall asleep at night.

Anxious to find a cure, he tried traditional Chinese medicine, food allergy tests, an “eczema safe” diet, qigong, Taichi, and yoga, but none of them helped.

Then, in 2015, Jing An read a book that mentioned that Falun Dafa was a practice that emphasized cultivating one’s heart. This made a deep impression on him. He went online to find out more and was overjoyed to learn all the Falun Dafa materials are available online and are free of charge. He started learning how to do the exercises. Much to Jing An’s surprise, three months later, he saw obvious improvement. The areas with the most serious eczema gradually recovered.

Jing An’s confidence increased greatly, and he started to read the Falun Dafa books. The more he read, the more interested he was. He discovered that what Master talks about is vast and deep. He learned how to treat others based on the principles of Truthfulness, Compassion, and Forbearance, and whenever he speaks or does anything, he first considers whether his actions and words are acceptable or whether it will hurt others. This improved his interpersonal relationships very quickly.

Jing An’s family also witnessed the changes in him. During a family gathering, Jing An’s brother, who had been suffering from depression for nearly 20 years, asked him if there was anything he could do to help alleviate his depression. He had been taking medication to control his illness for many years. Jing An had told him about the practice but his brother didn’t want to read books or do exercises.

Jing An thought about Falun Dafa’s phrases and told his brother, “There really is a very simple method, which is to sincerely say, ‘Falun Dafa is good, Truthfulness-Compassion-Forbearance is good.’ You do not need to give up any beliefs or change your lifestyle. You only need to recite these nine words. Anybody can do it.”

After reciting the phrases, his brother improved very quickly. The doctor said that if there was no relapse for a year, his chances of recovery were very high. Jing An’s brother told him, “When I feel scared or anxious, those phrases really help me to become calm and steady.” His insomnia and presbyopia also improved. Now he doesn’t wake up in the middle of the night as often.

Nine Words Saved Him from a Life Threatening Situation 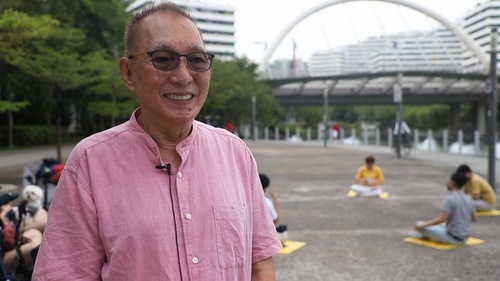 New practitioner Hu Songlan is 72 this year. Before he retired, he worked as a deliveryman. Two years ago, Mr. Hu almost died, which motivated him to begin practicing Falun Dafa.

Mr. Hu’s wife is a Falun Dafa practitioner and has practiced for 10 years. She often told him stories about cultivators and reminded him to say, “Falun Dafa is good, Truthfulness-Compassion-Forbearance is good.”

Mr. Hu encouraged his wife to practice Falun Dafa. He said, “Before, my wife was in very poor health. She had to see traditional Chinese doctors at least twice a week for cupping, acupuncture, etc., but she did not improve. I suggested that she go to government hospitals to visit the Western doctors but that did not help, either. I was very troubled! When she started practicing Falun Dafa I was dubious. But I saw her health keep getting better and better. I told her that it was really good that she learned this Falun Dafa!”

In March 2020, Mr. Hu was walking out of the bathroom when he suddenly felt dizzy and fainted. He said, “I could not move, but I was completely conscious and could hear the others talking.”

In the ambulance, the technician asked if him if he could move his hand. Mr. Hu realized that he could not move his hands or fingers. He wondered what he should do. He suddenly remembered to say the nine words his wife always reminded to say whenever he faced danger. He quietly started saying, Falun Dafa is good, Truthfulness-Compassion-Forbearance is good.

The hospital said that Mr. Hu’s blood vessels were blocked. Of the five main vessels, three of them were 75 percent blocked while one was 95 percent blocked. The hospital used the balloon dilation method to clear his vessels, but it didn’t work. He was transferred to another hospital for bypass surgery. Mr. Hu thought that was too high at risk so he declined. After returning to the first hospital, the doctors again used the balloon dilation method to open his main vessels. The doctor was worried that it would fail again, but this time, Mr. Hu kept reciting the nine words and the procedure was successful.

“I knew that Master had once again saved my life.” Before this, he had three dangerous experiences at work which he managed to survive. Mr. Hu exclaimed, “Master protected me every time! When I was young, I worked in a poultry slaughterhouse. I owed debts for many lives, and Master helped me to repay them.”

This time, Mr. Hu survived another disaster and decided to cultivate Falun Dafa with his wife. He attended the Nine-Day Falun Dafa Class. After truly entering into cultivation, Mr. Hu discovered that his health has kept getting better and better. In the past, he felt out of breath when he walked for a hundred to two hundred steps and needed to rest. Now, he does not feel tired no matter how far he walks. He used to take a lot of medications, but after cultivating, he gradually stopped taking anything. Now, his health is even better than before.

On the eve of World Falun Dafa Day, Mr. Hu, who obtained a new lease on life, said, “I’m really thankful to Master! I wish Master a happy birthday! Falun Dafa is good, Truthfulness, Compassion and Forbearance is good!” 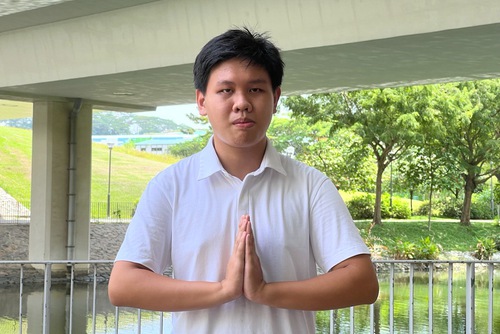 Andrew, 17, was plagued with illnesses when he was young. After cultivating, he became healthy. In honor of World Falun Dafa Day, Andrew wished Master a happy birthday and thanked him for his benevolent salvation.

Andrew was a sickly child who had to take all kinds of medications. When he was young, his immune system was so weak that he constantly caught the flu and had fevers. His childhood memories are filled with going to doctors and taking all sorts of Chinese and Western medications.

Andrew said, “Even though I lived on pills and herbs, I felt weak, my face was pale, and I was very thin. Food had no taste and I could not sleep well. Sometimes, when I took the medicine, I immediately vomited. The sight of pill bottles made me feel nauseous.”

When Andrew was seven years old, his mother took him to the Minghui class. After that, he embarked on his path of cultivation and his body started to change remarkably.

Andrew said, “When I was in the Minghui class, I read Zhuan Falun and practiced the exercises with the other young Dafa practitioners. I felt a joy and sense of happiness I had never felt before. Every night before I slept, Mom asked me to read Zhuan Falun with her. In less than a year, my fevers and flu were gone, and I haven’t been sick since then.”

Andrew’s father, who used to object strongly to his practicing Falun Dafa, saw the changes in his son and changed his attitude. When the whole family went overseas on vacation, his father even reminded him before leaving the house, “Don’t forget to bring Zhuan Falun.”

Now, Andrew is a strong and healthy young man. The Fa principles of Truthfulness, Compassion, and Forbearance guide him to look within himself when he meets with problems and to consider others first when he does things. In school he gets along with his classmates and remembers that he is a cultivator. When others make mistakes, he does not blame them. Instead, he examines himself to see if there are areas in which he did not do well. Andrew now has many friends.