(Minghui.org) May 13, 2022, marks the 30th anniversary of Falun Dafa being brought to the public and is the 23rd World Falun Dafa Day. Falun Dafa is now practiced more than 100 countries and regions. May 13 is also the birthday of Master Li Hongzhi, the founder of Falun Dafa. Practitioners from Hualien in Taiwan practiced the Falun Dafa exercises together at Chihsingtan Beach and spread the wonderfulness of Dafa to celebrate Master Li Hongzhi’s birthday. 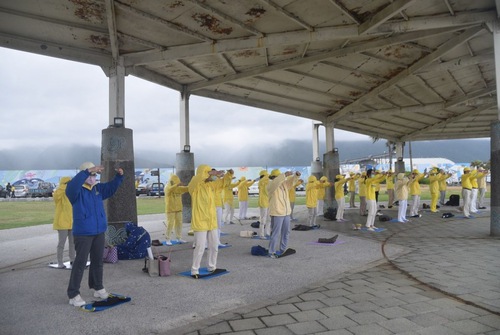 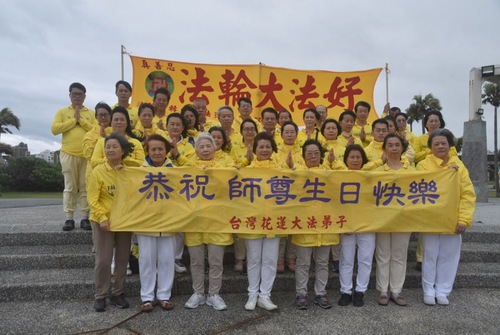 Before she practiced Falun Dafa, Hui Min had always regarded herself as a good person. She had a good temper and did not fight for fame or profits. But after aligning herself with the principles of Falun Dafa, Hui Min saw her attachments and realized she was still far from Dafa's high standards.

Hui Min is a tutor at an after-school program. She said, “I would lose my temper when the children misbehaved. Not only was I unable to educate the children, I was full of anger and had chest pain. But when I thought of Master’s Fa, I realized that venting my anger was a form of demon nature. After finding my shortcomings, I was able to readjust myself. Miraculously, the children became more obedient too.”

Due to the propaganda about Falun Dafa spread by the Chinese Communist Party (CCP), many Chinese people were deceived and did not understand the truth about Falun Dafa. Therefore, when Hui Min clarified the truth to sentient beings, she would say, “Falun Dafa practitioners abide by the principles of Truthfulness-Compassion-Forbearance to become better people. There is nothing wrong with wanting to do better. Despite this, this group of good people are sent to prison by the Chinese Communist Party. Some have suffered forced live organ harvesting. All of the officials who have taken part in these inhumane acts received profits from it. The Tiananmen Square self immolation is also a hoax that was contrived by the CCP. By understanding that Falun Dafa is good, Truthfulness-Compassion-Forbearance is good, one will have a good future.” Hui Min said that people often replied by saying, “I understand now,” “I know about it now,” or “Thank you!”

Hui Min has benefitted a lot from Dafa. Not only has she become healthier in both mind and body, she has also understood the true purpose of life. She feels very fortunate that Master and Dafa are here to guide her. No words can describe her gratitude toward Master.

Blossoming of the Udumbara Flowers

Jia Fen has cultivated Falun Dafa for 16 years and has benefitted a lot from the practice. Her skin has become smoother and she has also benefitted in many other ways.

“I always hold the principles of Truthfulness-Compassion-Forbearance in my heart and enlighten to the Fa principles. Only by changing my notions and thoughts can I upgrade my xinxing.”

Jia Fen said that both she and her daughter have been made fun of or were taken advantage of on different occasions, but she understood that these were things she had to endure in order to eliminate karma. “I had a dream last year where Master enlightened me with two words, pao qi, or to ‘get rid of.’ I enlightened that Master was telling me to get rid of my attachments,” Jia Fen shared.

Jia Fen stated, “I am grateful to Master for showing me many scenes that an ordinary person wouldn’t be able to witness. While doing the second standing exercise, I’d feel two big hands supporting my arms and head. Master also enlightened me through my dreams, and words from other people. My gratitude to Master is indescribable.

“Master also revealed a purple Falun emblem to me three times. I also saw blossoming udumbara flowers. I am able to conduct myself calmly and have more courage to look inward. I will strive to do the three things well and hope that more sentient beings will be able to experience the wonders and beauty of Falun Dafa.” 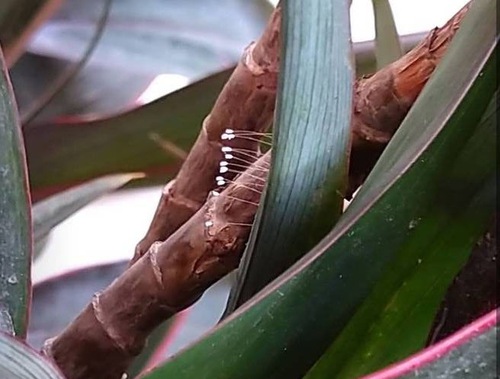 The blossoming of 12 udumbara flowers in Jia Fen’s flower pot.

Mao Song has been practicing Falun Dafa for 20 years, since 2001. He recalled that he had learned about the “SOS! Urgent: Rescue the Falun Gong Practitioners Persecuted in China” walk scheduled for September 2001 and decided to join the effort. They walked across Taiwan for 15 days and Mao Song officially began to practice Falun Dafa because of the project.

Mao Song said, “Those 15 days were very special to me. My deepest impression was that practitioners were very coordinated and cooperative. I have never been in a direct argument with any practitioner during my 20 years of cultivation. When the rescue walk ended after 15 days, I was excited but was still rational and calm. I realized that by looking inward unconditionally, we can do well in Dafa projects and get along well with others.”

Mao Song stated, “Though I did not get into direct arguments with other practitioners, I still experienced conflicts in my daily life and at my workplace. From working in the central government office to a local government building and to being a faculty member at a high school in Hualien, I’ve changed jobs five times. During this process, many of my human attachments surfaced. Had it not been for Master’s protection, my selfishness and arrogance would have gotten the better of me and I would not have cultivated.” 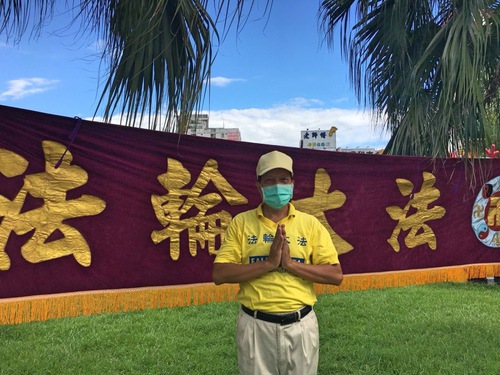 Mao Song, his palms together in the heshi position, expresses his utmost gratitude to Master.

With World Falun Dafa Day around the corner, Mao Song would like to express his utmost gratitude to Master for not forgetting him. He said, “I will look inward in the most rational matter, find my attachments, upgrade my xinxing and repay Master for Master’s compassionate salvation.”