(Minghui.org) On April 23-24, Ormond Beach held its annual Celtic Festival. Local Falun Dafa practitioners participated in the event with a booth. where they demonstrated the Dafa exercises and provided materials about the practice and the ongoing persecution in China.

Thousands of visitors from surrounding areas enjoyed the vendor booths and activities centered around Celtic music, traditional crafts like blacksmithing, and games such as axe-throwing, over the weekend.

Quite a few visitors were wearing the Celtic knot pendents as well as traditional Celtic dress and attire. As many cultures share similar symbols and meanings, some people were surprised to learn that the Celtic knot and the Swastika share similar meanings. The Swastika, known in Chinese as the “Wan Symbol,” is part of the Falun emblem, and represents the Universe as a symbol of Falun Dafa.

Many people who visited the Falun Dafa booth wanted to find out about times and places of local practice sites. Others learned about the practice and the ongoing persecution. Many were surprised and shocked about the Chinese Communist Party’s (CCP) horrific practice of forced organ harvesting from prisoners of conscience and signed the petition to condemn the practice. Visitors gladly took materials detailing the situation in China.

Both children and adults were drawn to the handmade lotus flowers which brought a lot of smiles. 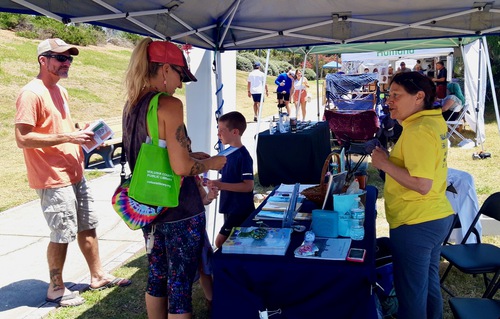 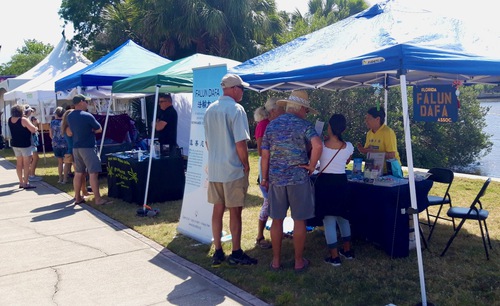 People want to learn more about Falun Gong and the persecution in China.

An American woman of Chinese ethnicity and her nine-year-old son were very interested in learning about the Falun Dafa symbol and its appropriation by the Nazis in World War II. Her son was very bright and interested in history. They thanked the practitioners for speaking with them.

Practitioners later spoke to a nurse about how Falun Dafa practitioners in China were blood-typed and tissue matched upon arrest and are at great risk of forced organ harvesting. She was shocked when she heard about the short waiting times for obtaining an organ in China. She took a lot of materials with her before she left.

A woman stopped at the Falun Dafa booth who said that she was a nurse who worked in a burn unit. She said that she provided medical assistance to trauma patients that had suffered burns on over 60% of their bodies. The nurse was very impressed with the practice of Falun Dafa. She said that she would pass along the information about forced organ harvesting to her medical colleagues and Asian friends.

Many people traveled a long way to come to the Celtic Festival. Some traveled from the West Coast of Florida and others traveled from Orlando and further south. One woman, originally from New York, is the President of a non-profit veteran’s group, involved with fundraising for veterans memorials. She invited the practitioners to a ceremony on Memorial Day, recognizing serviceman who have served the country and commemorating those who died in war. When the practitioners told her about the movement to quit the CCP and its affiliated organizations, she recognized their groups’ similar missions to expose the horrors of communism.

A woman from Colorado said that she had been following the Falun Gong story and wanted to know if the persecution still was going on. She spent some time talking to the practitioners about the current situation and took materials to share.

Deeply moved by the efforts of the practitioners to expose the persecution, a woman said, with tears in her eyes, “Thank you for doing this. Thank you for making people aware of this!”

The practitioners also met many people from different countries. A Polish woman expressed that she was afraid that Communism has spread to the United States. She said that she was an Epoch Times subscriber and was very familiar and well informed about Falun Gong. She talked about her friend in Poland, who practices the Falun Gong exercises with her child.

A mother whose oldest daughter is studying Mandarin wanted to know more about Falun Gong. Both of her children left with the story of the Mystical Lotus Flower and learned the Chinese pronunciation of the core principles of Falun Dafa: Zhen, Shan, Ren – Truthfulness, Compassion and Tolerance. 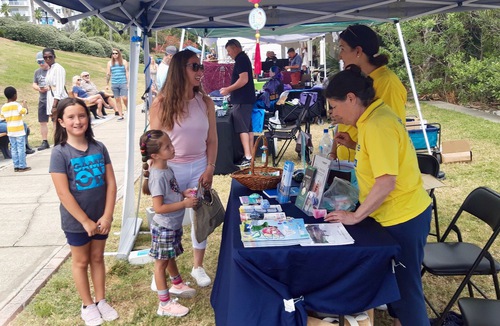 This young girl is learning Mandarin and learned how to say “Truthfulness, Compassion and Tolerance” in Chinese. 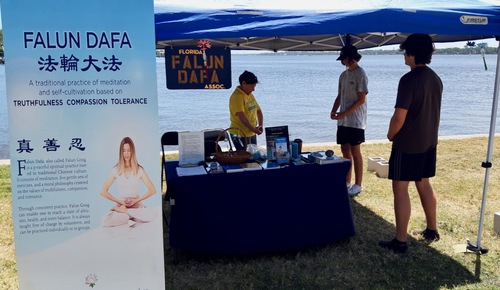 These two young men were eager to learn the Falun Dafa exercises.

Two young men came directly up to the booth and asked, “Can we learn the exercises right now?” After practicing the first exercise of stretching and opening the energy passes, they said that they felt a strong energy flowing in their bodies. They said they especially felt energy when conjoining the hands in the jieyin position (see picture above).

The young men passed by the booth several times over the course of the Celtic festival. One of them called out, “I fell in love with Falun Dafa!”