(Minghui.org) After being on pause for two years due to COVID-19, the 41st annual Flame Tree Arts Festival took place on Saipan Island. Falun Dafa practitioners held The Art of Zhen Shan Ren International Exhibition on April 29, 2022. Many people were attracted to the artworks and wanted to know more about Falun Dafa. Not only did the artworks display the skill of the artists, they also depicted the solemness, dignity and beauty of Falun Dafa. 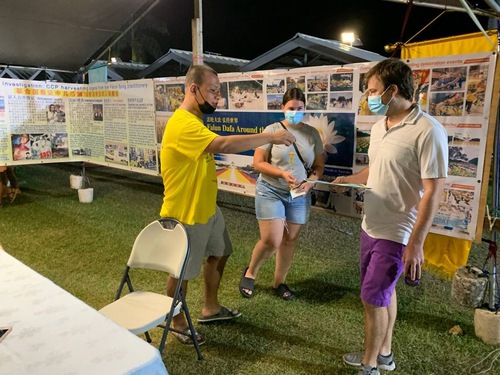 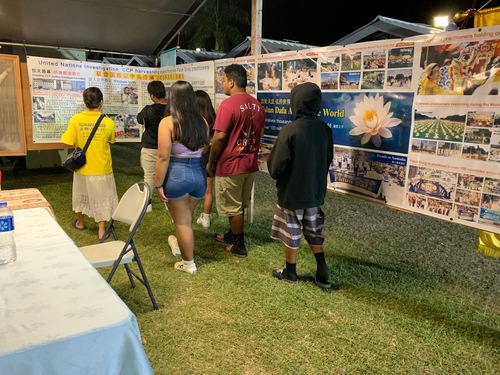 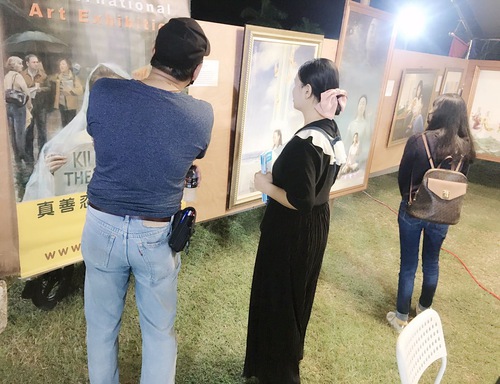 Festival attendees learn about Falun Dafa and how the CCP is persecuting it.

Practitioners also demonstrated the five sets of exercises and told people about Falun Dafa’s guiding principles of Truthfulness-Compassion-Forbearance. Practitioners stated that one can achieve a healthy mind and body, follow a high level moral code, and find the true purpose of life. They told people that one can learn the practice online by watching instructional videos or by going to a group practice site and learn free of charge. 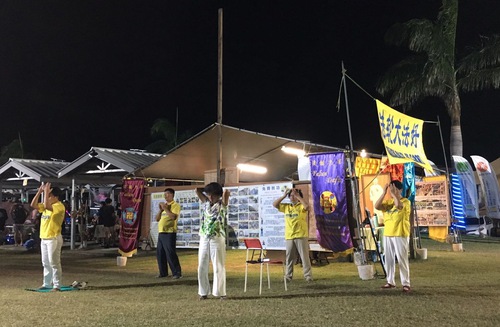 Many locals were shocked at the CCP’s (Chinese Communist Party) ongoing persecution and voiced their support to help practitioners end the persecution and stand on the side of justice.

A man was interested in the painting, “Call of Innocence.” The painting depicts a little girl holding up a poster that reads, “Killed For Their Belief.” Her eyes shine brightly and her belief in Dafa is firm. Her actions call on the conscience of others, hoping that people will awaken to the truth and help end the persecution.

A practitioner explained, “The CCP persecutes Falun Dafa practitioners physically, mentally and psychologically. The CCP also removes practitioners’ organs while they are still alive—this is the most wicked crime in the universe.” The man said he was deeply touched and expressed his sympathy. He walked over to another painting, “Fulfilling Vows,” and asked, “Does this painting depict the divine?” The practitioner replied, “We come from Heaven and everyone hopes to return. You and I might even be in this painting.” The man remarked, “This is very beautiful and solemn.” He was taken aback from the power of faith and wanted to learn more about Falun Dafa.

Spreading the Truth about Falun Dafa

Practitioners distributed informational materials at the festival. Many people said they knew about the CCP’s brutality and supported Falun Dafa and the principles of Truthfulness-Compassion-Forbearance. Practitioners stated the importance of the truth-clarification materials, encouraged residents to spread the truth about Falun Dafa to their friends and family and to stand on the side of justice for a better future. People said they understood and would read the materials. 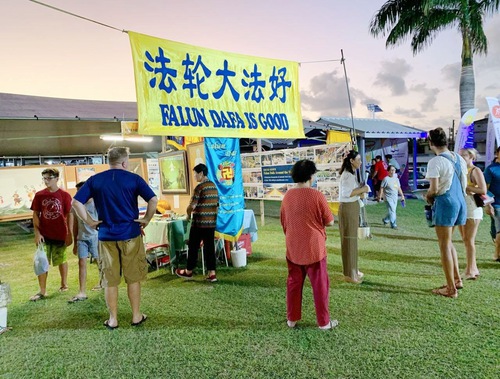 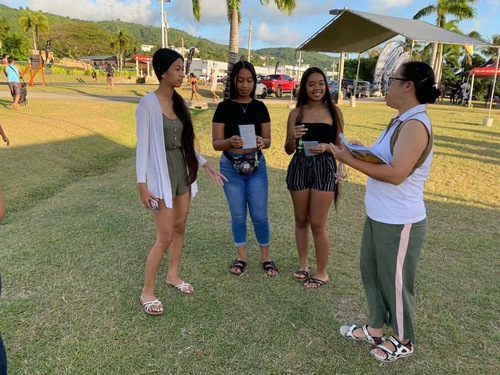 Many festival attendees stopped to view the artworks and condemned the CCP for the persecuting Falun Dafa. Some also sent their regards and best wishes to Falun Dafa practitioners. They said that the world needs Truthfulness-Compassion-Forbearance.

“My Family and I Benefit from Practicing Falun Dafa”