(Minghui.org) Falun Gong practitioners in Berlin, Frankfurt, Munich and other cities in Germany gathered peacefully in front of the Chinese Embassy and Consulates on April 25, 2022, to commemorate the 23rd anniversary of the April 25 peaceful appeal and to call for an end to the persecution of Falun Gong in China. 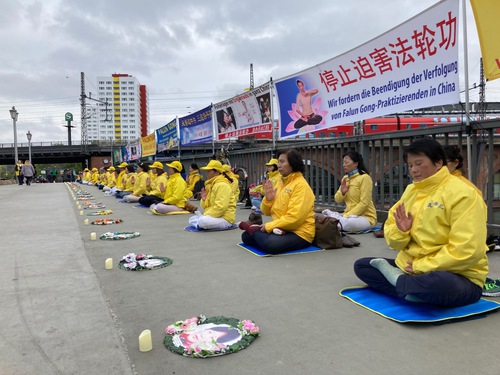 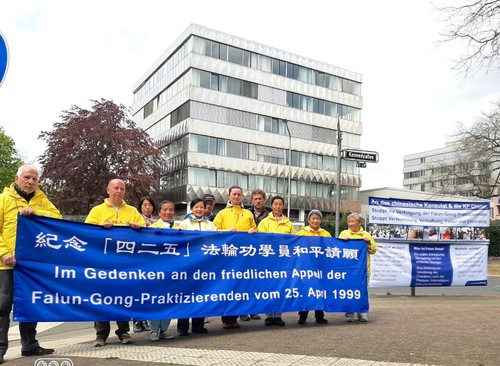 Practitioners in Frankfurt protest in front of the Chinese Embassy

Practitioners held a peaceful protest on the street opposite the Chinese Consulate in Munich.

Mr. Chen Gang, who participated in the historic April 25 appeal, recalled that “All practitioners just stood along the street calmly. No one shouted slogans or used any strong words. At that time, I felt the power of peace.”

“The world is chaotic this year, with the pandemic and the Russia-Ukraine war. The principle of Falun Gong, Truthfulness-Compassion-Forbearance, becomes ever more important because it is not only suitable for individuals but also for countries. Countries should resolve problems by negotiation and peace. The world is in so much need of Truthfulness-Compassion-Forbearance.”

“This is the power of compassion. Over the years, the CCP (Chinese Communist Party) has not been able to eliminate Falun Gong. Instead, Falun Gong has spread to more than 100 countries around the world and the CCP is facing an unprecedented crisis,” he said.

“We must believe in the power of Truthfulness-Compassion-Forbearance, and resolve all conflicts peacefully.” 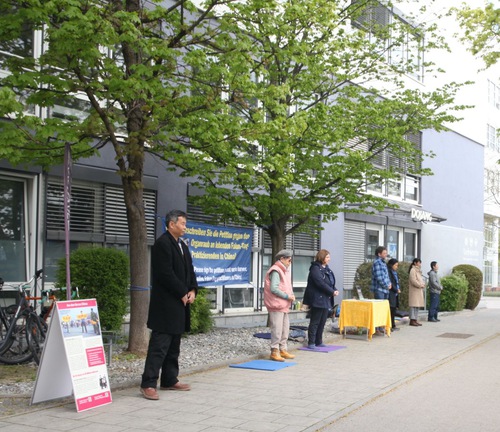 Mr. Ibrahimzada passed by the activity site. After he learned about the persecution and the organ harvesting crime, he signed the petition, which calls for the end of live organ harvesting of Falun Gong practitioners in China. He said, “Removing organs from a living person without consent is not allowed. Humans cannot be treated like animals.”

Practitioners in Berlin: Benefit from Falun Dafa, Do All We Can to Stop the Persecution 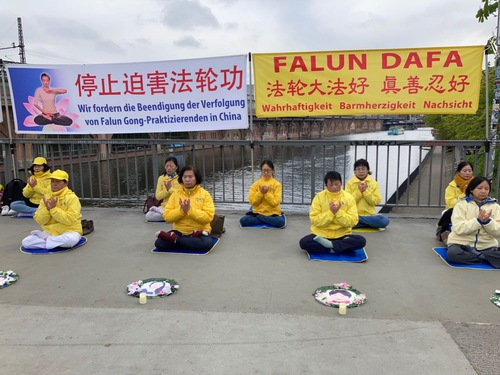 Ms. Victoria Neciu, a native of Romania, currently works and lives in Berlin. She started practicing Falun Gong in 2016 and has since quit smoking. Falun Gong has given her a new life and she couldn’t appreciate it more. On April 25, she took a day off to attend the event in front of the Chinese Embassy. She felt that she should try her best to stop the persecution in China. 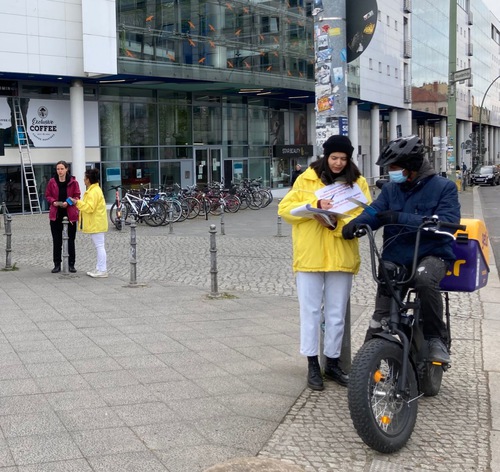 Victoria telling people the persecution of Falun Gong in China

Ms. Pamuk Alkan immigrated to Berlin from Turkey when she was 13 years old. She also started practicing Falun Gong in 2016. She is the owner of a fast food restaurant chain. She was impatient and often argued with people before. After practicing Falun Gong, her family members and colleagues noticed that her temper was getting better and better, and she turned into a different person. She said that participating in activities protesting the persecution is her mission. She has benefited from Falun Gong and she should stand up for her fellow practitioners who are still being persecuted in China. 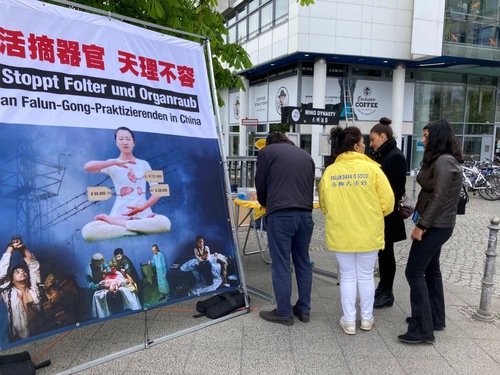 Ms. Pamuk Alkan (in yellow) told people about the organ harvesting from living practitioners in China

On that day, several of Alkan’s friends happened to walk across the bridge. She took the chance to talk to them and share her experience in practicing Falun Gong. They all signed the petition.

Frankfurt Practitioner: I Have Come Here on April 25 Every Year Since 1999 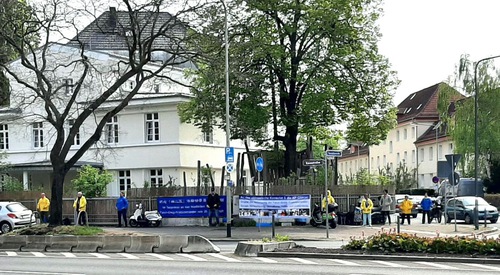 Some practitioners in Frankfurt held an activity in front of the Chinese Consulate to commemorate the April 25 Appeal. Many people passing by accepted the leaflets about the persecution.

Aleardo, a practitioner from Switzerland, drove 800 kilometers round trip to join the event. He said, “I started practicing Falun Gong in 1996 and since then I have benefited a lot from the practice. I no longer complain about things and my quality of life greatly improved.”

Aleardo continued, “It has been 23 years since the CCP started the persecution of Falun Gong. I have come to the Chinese Consulate every year on April 25 to demand an immediate end to the cruel persecution. I cherish the opportunity to join this event. We will let more and more people know how brutal the persecution is and how evil the CCP is.”

“Podcast (Cultivation): “Stories About the Early Days of the Minghui Website – Part 2””