(Minghui.org) Over 2,000 Falun Dafa practitioners held events in Flushing, New York, to commemorate the peaceful appeal that took place 23 years ago on April 25, 1999. After a grand parade, the practitioners held a rally on Kissena Boulevard next to the public library. They celebrated the fact that 390 million Chinese people chose a bright future by quitting the Chinese Communist Party (CCP) and its affiliated organizations. Dignitaries who spoke at the event called on humanity to awaken and pay attention to the Chinese regime’s crimes. 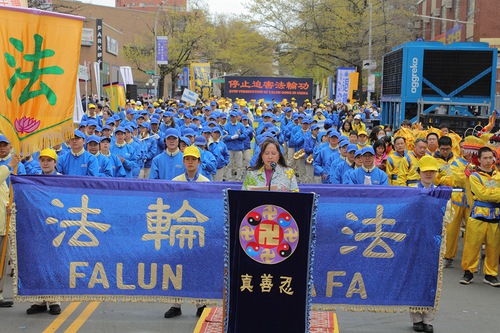 Practitioners held a rally in Flushing, New York to commemorate the peaceful appeal 23 years ago on April 25, 1999.

Public figures and practitioners who participated in the April 25 appeal spoke at the rally. Ms. Yi Rong, chair of the Global Service Center for Quitting the CCP, urged people to quit the CCP. Ms. Martha Flores-Vazquez, a district leader in Flushing, called on people to learn from Falun Gong. Kim Se-Hoon, director of the Captive Nations Coalition, exposed the CCP's lies. One young man who works on Wall Street talked about how he quit the CCP with his real name and afterward began practicing Falun Dafa. Other rally participants called to eliminate the CCP and hold it accountable for its crimes against humanity.

Ms. Yi Rong, chair of the Global Service Center for Quitting the CCP, said that over 10,000 Falun Gong practitioners went to Zhongnanhai, the CCP's headquarters, to ask for the right to practice freedom of belief 23 years ago. Their peaceful demeanor that day impressed the world. Since that day practitioners’ efforts to expose the CCP’s true nature impressed the world’s people and frightened the CCP. Practitioners bring hope and light to those who are suffering under the CCP's dictatorship.

Ms. Yi called on the CCP to end the 23-year-long persecution. She said, “History has come to a critical moment and everyone must choose between good and evil.” She encouraged people to help spread the truth about Falun Gong and wake up those who were deceived by the CCP's lies. “When a person chooses righteousness and kindness, they receive a ticket to a bright future,” she said.

She then called on all Chinese people not to bow to the evil but to be brave and quit the CCP publicly.

Ms. Martha Flores-Vazquez, Democratic leader of New York State’s 40th district, said that she’s never seen a parade so well organized, so beautiful, and full of benevolent energy. She said that she wasn’t going to come to the rally if it rained, yet the practitioners’ noble spirits, including their leadership and perseverance, stopped the rain. 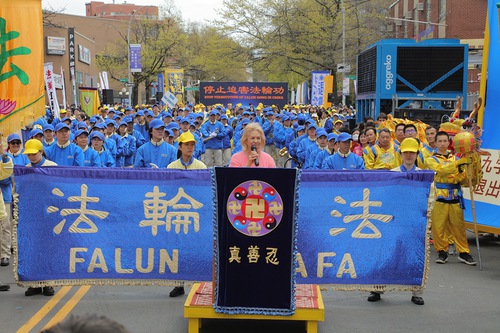 Ms. Flores-Vazquez said, “I will stand with you every year.” She stressed that the 40th district has zero-tolerance for violence, and will provide protection for these courageous practitioners. “We are learning from you, and we thank you!”

Ms. Li Huilai from Beijing participated in the appeal 23 years ago. She said the practitioners were very peaceful and the atmosphere was solemn. “When they saw how quiet we were—we did not even have any banners or shout any slogans, the police relaxed and even chatted with each other.” The practitioners began leaving around 9 p.m. Ms. Li told the police who were videotaping them, “With so many people here, there isn’t even a piece of trash on the ground. Practitioners even picked up the cigarette butts left by the police. These people are more than nice.” 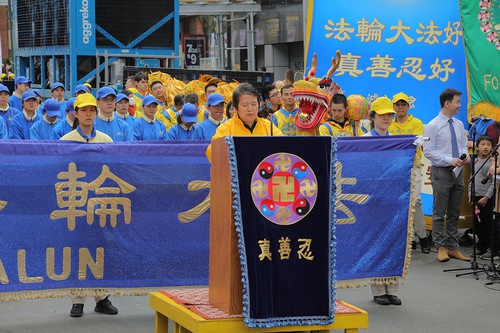 Ms. Li said the practitioners exercised their civil right to appeal that day, and they broke no laws.

Mr. Fang Yiming came to the U.S. to study in 2009 and found a job on Wall Street after he graduated. “When I lived in China I never imagined that I’d quit the CCP and begin practicing Falun Dafa,” he said. He used to believe in Communism, and that it could uplift China into a superpower. 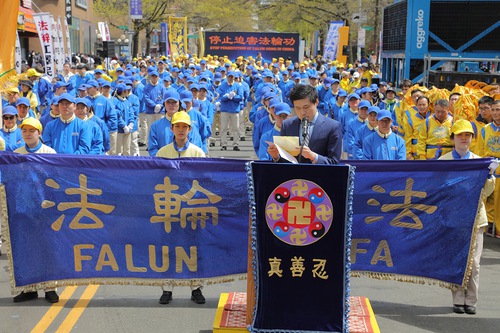 He said he saw the CCP’s true colors when he read the Nine Commentaries on the Communist Party. “I spent an entire day reading it. It not only talks about theories but gave many examples.” Afterward, he watched documentaries about Falun Dafa, “My stomach hurt when I watched... it was hard for me to accept the facts. Everything that happened was the opposite of what I was told.”

After he learned the truth about Falun Gong and that the persecution was wrong, he went online and quit the CCP with his real name in October 2020.

I Apologize to Falun Gong 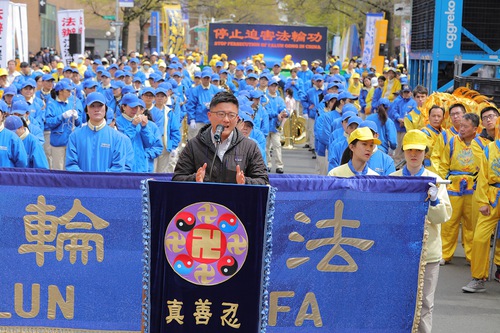 Mr. Kim Se-Hoon, Director of Captive Nations Coalition of the Committee on Present Danger speaks at the rally.

Mr. Kim Se-Hoon, Director of Captive Nations Coalition of the Committee on Present Danger: China, said that ten years ago he didn’t approve of Falun Gong, and he supported the CCP. In high school, he argued with his friend that the CCP should suppress Falun Gong because it would become a threat to the existing regime. In college, he believed that China represented the future.

When the CCP hired thugs to attack practitioners in Flushing in 2008, he thought Falun Gong deserved it. “I was so deluded by the CCP's propaganda, and had no idea that Communism brought horrible disasters: the CCP kills practitioners and sells their organs. It also persecutes the Christians, Uyghurs, Tibetans, and Hong Kong residents.”

One cold winter day in 2012, Kim met a practitioner handing out fliers outside the public library in Flushing. It was the first time he met a victim of the CCP’s brutality. The practitioner described how she was persecuted and told him that she and her sister did nothing wrong but the CCP chose to persecute them. Moved by her story Kim started to rethink what he believed.

He told practitioners, “Your devotion changed me, and I started to look for the truth. I watched NTD Television and read The Epoch Times. I felt ashamed of myself. I failed to sympathize with the victims of the violent CCP regime. I apologize to all of you.”

“I want to say to the members of the CCP, especially those in the New York Chinese Consulate: if I can change, so can you.”

Time to Zero-out the CCP

Mr. Cai Guihua, a democratic activist, said that mankind needs to zero out the CCP. “Throughout the decades it brought people in China great calamities and disasters and is now destroying international society. It’s urgent for everyone who wants to move to a better future to eliminate the CCP.”

Mr. Yang Shisong from the Christian Alliance for Righteousness said that the CCP locked down Shanghai to zero out the COVID virus, and as a result caused massive numbers of people to die of hunger, illness, and suicide. “Now Shanghai is hell on earth, and people feel their lives are worthless. The CCP’s goal in dealing with the pandemic was to achieve absolute obedience through extreme violence.” He pointed out, “To eliminate the CCP virus, the world must first eliminate the CCP.” 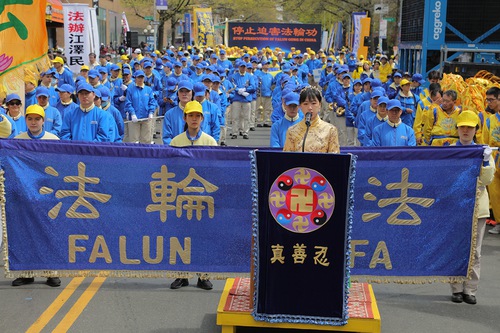 Ms. Zhang Minghui described how her family was persecuted.

Ms. Zhang Minghui, 23, said that there were 11 people in her family who practiced Falun Gong. After the persecution started, the CCP put many of them in detention centers, forced labor camps, brainwashing centers, and ransacked their homes. She was traumatized and lived in constant fear. The authorities put her father in prison for four years after she came to the U.S. During the rally she asked the police in China not to sell their souls and conscience to the CCP.

Falun Dafa (also known as Falun Gong) was first introduced to the public by Mr. Li Hongzhi in Changchun, China in 1992. The spiritual discipline is now practiced in over 100 countries and regions worldwide. Millions of people who have embraced the teachings--which are based on the principles of Truthfulness, Compassion, and Forbearance--and learned the five gentle exercises have experienced uplifted health and well-being.

“Opening a Pharmacy: Proving the Honesty of Practitioners”