(Minghui.org) The 2022 Annual Report of the United States Commission on International Religious Freedom (USCIRF) was released on April 25. It found that “the religious freedom considerations in China deteriorated” in 2021. Citing information from Minghui.org, the report said at least 101 practitioners had lost their lives to the persecution last year. 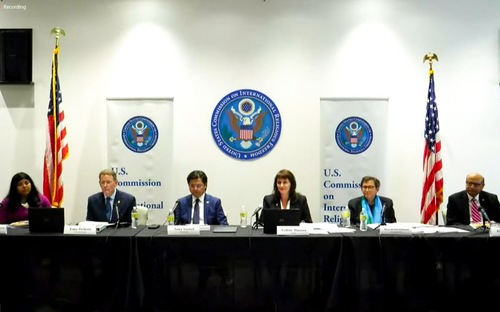 The United States Commission on International Religious Freedom (USCIRF) released its 2022 Annual Report during a press conference on April 25, 2022.

Thousands of Practitioners Harassed and Arrested

As defined by the International Religious Freedom Act (IRFA), the report again designated China as a “country of particular concern (CPC)” for “engaging in systematic, ongoing, and egregious violations of religious freedom.”

The Chinese Communist Party (CCP) has not only banned its members from believing in or practicing any faith, but also long repressed religious freedom, according to the report. In recent years it has become increasingly hostile toward religions, implementing campaigns to “Sinicize” them.

“These policies require religious groups to support CCP rule and its political objectives, including by altering their religious teachings to conform to CCP ideology and policy,” noted the report. “Both registered and unregistered religious groups and individuals who run afoul of the CCP face harassment, detention, arrest, imprisonment, and other abuses.”

Peaceful groups like Falun Gong are even more vulnerable to persecution. “Falun Gong source Minghui reported that in 2021, authorities harassed and arrested thousands of Falun Gong practitioners and sentenced 892 to prison terms. At least 101 practitioners died as a result of government persecution,” wrote the report.

There are 208 Falun Gong practitioners on the Freedom of Religion of Belief (FoRB) Victim List, making it one of the worst persecuted groups in China.

The report pointed out that in May 2021, the US Department of State announced visa sanctions against Chinese official Yu Hui for his involvement in the persecution of Falun Gong practitioners.

“Religious minorities have faced harassment, detention, and even death due to their faith or beliefs, and years of progress toward more equitable access to education and representation of women and girls have disappeared,” remarked USCIRF Chair Nadine Maenza during the press conference. She said she and her agency have been paying attention to the suppression of Falun Gong—including forced organ harvesting in recent years—and they will continue their efforts to help stop the persecution.

U.S. Senator Marco Rubio said in a video speech that many people had been harassed, detained, tortured, and even killed for their belief last year. He and other officials will focus on those perpetrators who are responsible for this, especially CCP officials.

It is also important to “work with like-minded countries in international fora, including the United Nations (UN) Human Rights Council, to collectively hold the Chinese government accountable for severe religious freedom violations,” according to the report. This includes creating a UN Commission of Inquiry to investigate and identify perpetrators of genocide and other atrocity crimes and document severe human rights abuses throughout China.

“Podcast (Cultivation): “Overcoming the Mindset of Slacking Off””