(Minghui.org) Falun Dafa practitioners held a group practice and rally on Aotea Square in central Auckland on Saturday, April 23, to commemorate the 23rd anniversary of the April 25 peaceful appeal. Many passersby stopped to listen to the speeches and signed a petition to support practitioners’ efforts to end the Chinese Communist Party’s (CCP) persecution. 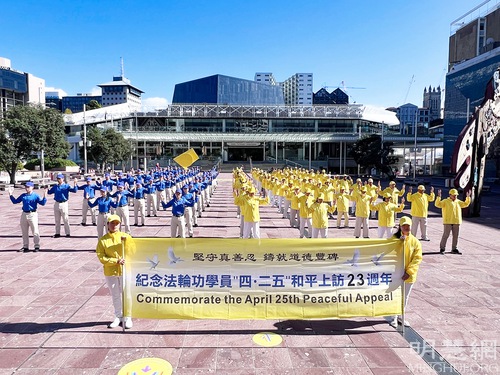 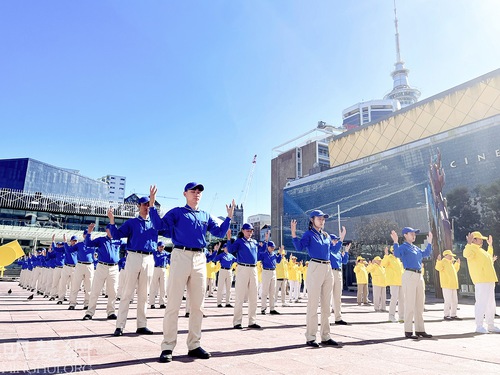 Practitioners demonstrate the exercises on Aotea Square in central Auckland on Saturday, April 23 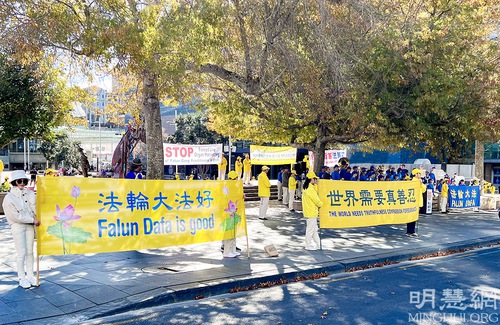 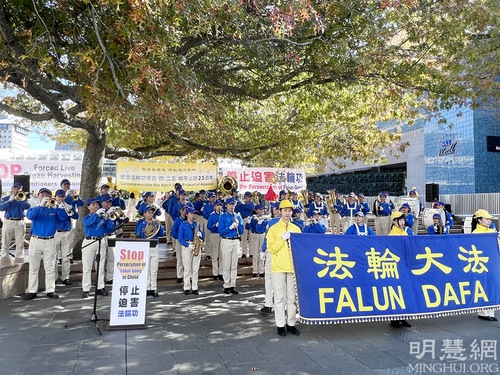 The Tian Guo Marching Band performed during the rally. 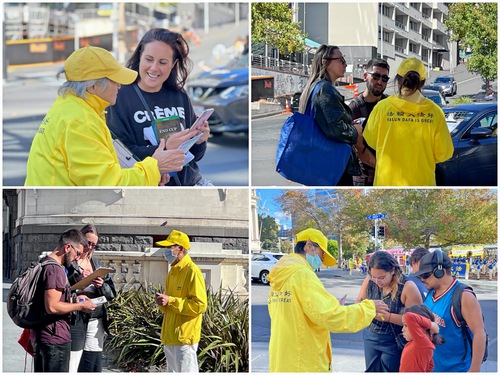 Secretary General of the Universal Peace Federation: We Must Safeguard Human Rights

Geoffrey Fyers, Secretary General of the Universal Peace Federation, said, “I am happy to be here today to be able to speak for the persecuted Falun Gong practitioners in China. Because we live in this free country, we can share our beliefs and opinions without being persecuted.”

He said that. since 1949, the CCP has deprived people of their beliefs bit by bit. The Party launched the persecution of over one hundred million Falun Gong practitioners because Marxism does not allow belief in God. 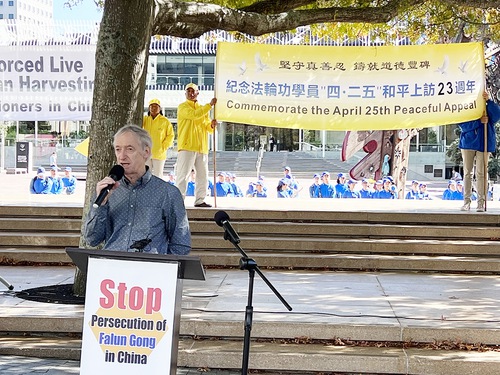 He said, “Falun Gong practitioners are the most peaceful and kindhearted people. The principles of Truthfulness-Compassion-Forbearance they uphold are needed today. If kindhearted New Zealanders do not recognize the evil nature of communism, they will eventually lose their freedom.” He wished that New Zealand and the entire Pacific region, including Taiwan, would unite to defend human rights. 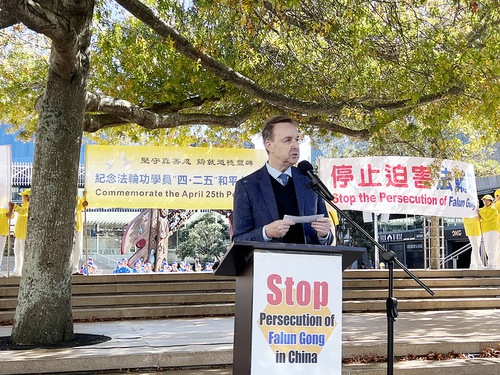 “The principles which Falun Gong practitioners cultivate are Truthfulness-Compassion-Forbearance. Those principles remain of importance to us all. This is because they constitute the very fabric of any society which has any realistic prospect of survival.

“By persecuting Falun Gong practitioners and the principles they cultivate, the CCP is attacking the very principles which can assure the continued existence of any society. Thus, the CCP is hastening and accelerating the demise of the social order in Mainland China. Upon the destruction of that social order, the CCP’s collapse is surely an inevitable outcome.

“It is at that moment that the Chinese people will reclaim their cultural inheritance. The principles of Truthfulness-Compassion-Forbearance will constitute the moral and spiritual foundations of this new epoch.

He said, “It has been rightly said that ‘good is rewarded and evil is punished.’ It is this principle that assures us that the demands of justice will therefore not be denied. History will pass judgment upon the CCP, its leaders, and those responsible for the persecution of Falun Gong practitioners.”

The CCP Is Inhumane

Paulini Cross is a member of Sailing New Zealand and travels frequently. She said, “I was reading in a nearby library and the music kept ringing in my ears. I thought I had to find out what was going on. After coming here, I was amazed by the beautiful music. It is so energizing and exciting. I think the whole world should listen to it. Otherwise, the CCP will continue to do evil and eventually destroy the world. But many people don’t realize this and they don’t think it is important to them. However, they must know that the CCP is inhumane and is very evil.”

Kauri Toura works in the building next to the square. He said, “I see Falun Gong practitioners doing the exercises on the square every day. I like watching them do the exercises very much. According to my understanding, Falun Gong is very good. It is good for the body and mind and benefits one’s whole life.

“What the CCP has done is terrifying. The CCP locks up Falun Gong practitioners in prison and harvests their organs for profit. How could the CCP do such a thing?! Practitioners’ peaceful protest is very meaningful. We should all unite and say no to the CCP.”

Falun Dafa (also known as Falun Gong) was first introduced to the public by Mr. Li Hongzhi in Changchun, China, in 1992. The spiritual discipline is now practiced in over 100 countries and regions worldwide. Millions of people who have embraced the teachings, which are based on the principles of Truthfulness-Compassion-Forbearance, and learned the five exercises have experienced improved health and well-being.