(Minghui.org) Falun Dafa practitioners held truth-clarification activities in Hong Lim Park in Singapore on April 22, 2022, to commemorate the 23rd anniversary of the April 25 peaceful appeal which took place in Beijing on April 25, 1999.

In recalling that event 23 years ago, a practitioner from Changchun, China, said, “After learning that Falun Dafa practitioners in Tianjin, China, had been arrested, many of us were eager to travel to Beijing. We wanted to speak up for Falun Dafa. We all knew that Falun Dafa was good. Why wouldn’t the Chinese Communist Party let us practice this exercise?” 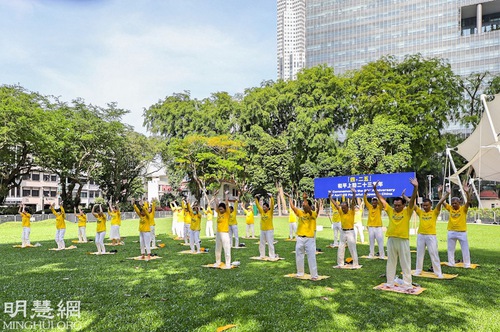 Practitioners do the five Falun Dafa exercises in Hong Lim Park on April 22. 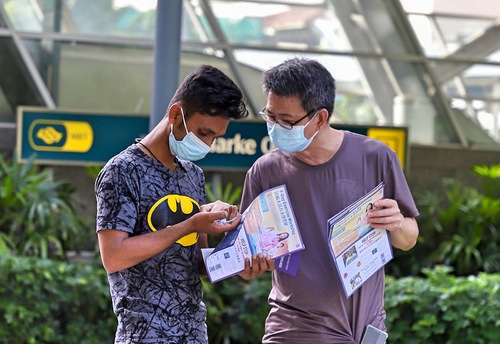 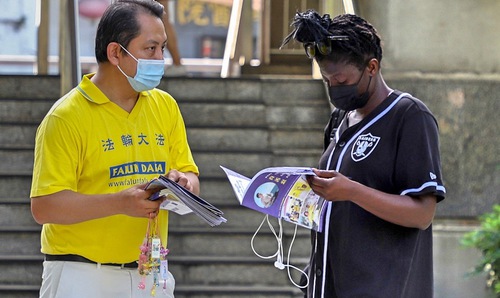 A lady from Costa Rica learned about Falun Dafa and wanted to read Zhuan Falun, the main text of Falun Dafa. 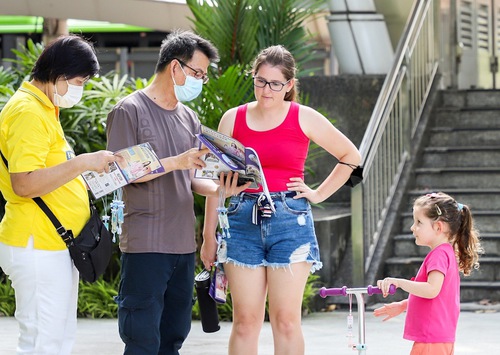 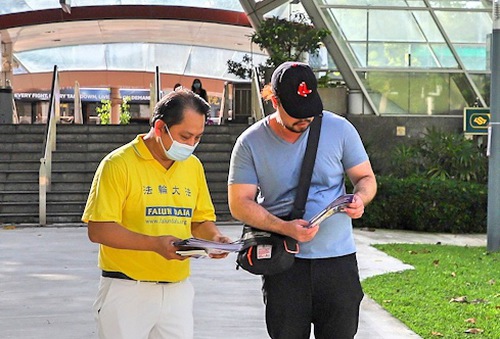 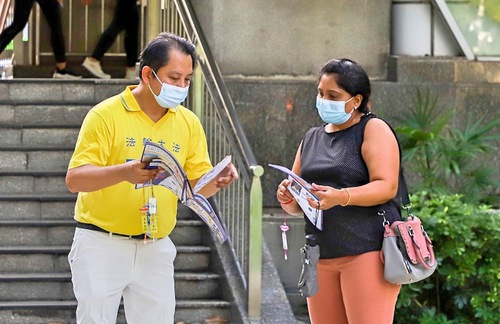 After the arrest of dozens of Falun Dafa practitioners in Tianjin, more than 10,000 practitioners headed to Beijing on April 25, 1999, to peacefully appeal for the practitioners’ release. This event gained international attention for being “the most rational, successful, and largest appeal in the history of China.” Practitioners were peaceful, orderly, and rational during the appeal.

“This is Falun Dafa, right?” a middle-aged man asked as he passed. When he was told that it was, indeed, the man replied that he already knew Falun Dafa and the persecution in China.

Practitioners were able to obtain an outdoor gathering permit for the first time since the outbreak of COVID-19 (the CCP virus). They held truth-clarification activities and did the exercises together. Many passersby were inspired by the calm atmosphere.

“This looks so peaceful!” said a lady from the Netherlands. She spoke with a practitioner and took some information.

Several workers from Bangladesh loved the handmade paper lotus flowers. They asked for truth-clarification materials and expressed their gratitude to practitioners. One of them also asked to take a picture of a practitioner as a memento.

A lady from Costa Rica was very interested in Falun Dafa’s ability to benefit one’s mind and body. She said that she would read Zhuan Falun, the main text of the practice, once she got home. The practitioner told her that Zhuan Falun has been translated into many different languages and she can easily find the version that best suits her on the falundafa.org website.

Several local Singaporeans were interested in learning the exercises. A Chinese lady chatted with a practitioner for a long time and said that she would like to take her family members to the local group practice site. Another man said that he would share the truth-clarification materials with his father.

“Many practitioners from Changchun wanted to speak up for Falun Dafa”

“I could not have been happier,” she said. “I felt sweeter than honey itself. I no longer felt tired when I worked, and many of my grudges and resentments just dissolved. I became more broadminded and turned into a completely different person! I used to be short-tempered, but after cultivating Dafa, I would take a step back and think about my shortcomings. I started to look inward and abided by the principles of Truthfulness-Compassion-Forbearance.

“There were seven or eight group practice sites near my home. We’d often tell others about the wonders of Dafa and teach people how to do the exercises. People recovered from terminal illnesses. There are simply too many such examples.”

“One could not be any more fortunate than being a Falun Dafa practitioner. Falun Dafa was wonderful. Why would one be banned from practicing it? Everyone wanted to go to Beijing, so the assistants decided to rent a bus. Not long after we got on the bus, practitioners from Beijing called and told us that it was no longer necessary to go to Beijing. The Chinese Premier, Zhu Rongji, had released the arrested practitioners. After that, the police started to harass us. I never expected the persecution would become so evil and inhumane.”

Ms. Zhou was a government official in China. She was diagnosed with a uterine tumor in July 1999. “I was weak and had to go for a check-up every month. Every time, the doctor would tell me that my tumor was bigger than before. The doctors prescribed drugs, but nothing helped. When the tumor was about 6 cm (as big as a duck egg), my doctor told me that I had to have surgery to have it removed.”

Two young coworkers told Ms. Zhou about Falun Dafa in December 1998 and lent her a copy of Zhuan Falun. Ms. Zhou finished reading it in two days and understood many of life’s principles. She began to re-evaluate the meaning of her life and thought about cultivating.

“When I went for my next check-up with my husband, the doctors told me surgery wouldn’t be necessary after all because my tumor had shrunk. I thought it was a miracle! I wanted to buy Zhuan Falun because this was no ordinary book. I went to several different bookstores but none carried Zhuan Falun because it was out of stock. In the end, my colleagues gave me their copy of Zhuan Falun.”

Falun Dafa was deeply rooted in the hearts of the Chinese people. Many were drawn to the practice by word of mouth. Ms. Zhou learned that many of her supervisors also practiced Falun Dafa.

When the incident happened on April 25, 1999, Ms. Zhou’s supervisors told her to stop practicing Falun Dafa if she wanted a bright future.

“I went to the hospital for a check-up once again, and my doctor told me that my uterine tumor was now the size of my little finger. I knew I had to practice Falun Dafa and that I would rather give up my rank and title at work.”

When the nationwide suppression of Falun Dafa began in July 1999, Ms. Zhou’s employer threatened her. They warned her to give up the practice or else she would be fired.

“I told my supervisors that I was determined to practice Falun Dafa! I asked them if they could guarantee my health. They told me they couldn’t. I said that Master could give me a healthy body,” Ms. Zhou said.

Ms. Zhou had an opportunity for a promotion at that time but chose Falun Dafa instead. “Life is too short. Some things don’t last and I can’t bring them to my next life. So what’s the point of being a high-ranking official when you are ill? Perhaps I would have dropped dead long ago.”

Ms. Zhou and her friend traveled to Beijing’s Tiananmen Square and opened their handmade banner in 2000. “I was finally able to speak up from my heart. Falun Dafa is good. Falun Dafa is the most righteous Fa,” she said with emotion.

“Falun Dafa Practitioners and Their Families Blessed with Health and Safety”