(Minghui.org) April 25 marks the 23rd anniversary of the peaceful appeal by 10,000 Falun Dafa practitioners in China. On Saturday night, April 23, 2022, practitioners in the greater Los Angeles district gathered in front of the Chinese Consulate once again to remember this extraordinary day in history, demonstrate how wonderful the practice is, expose the Chinese Communist Party’s (CCP) continuing suppression of kind citizens and awaken people’s conscience. 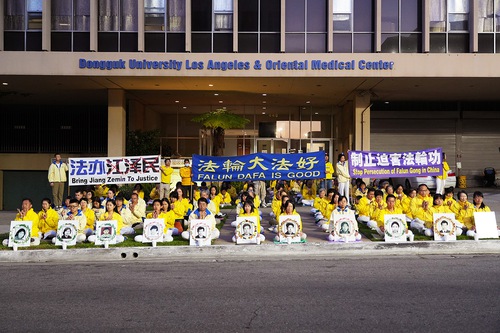 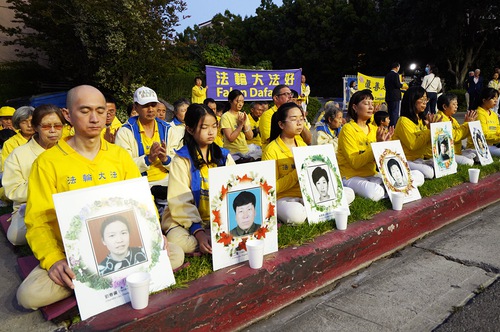 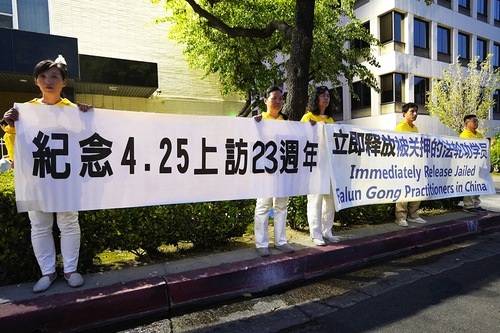 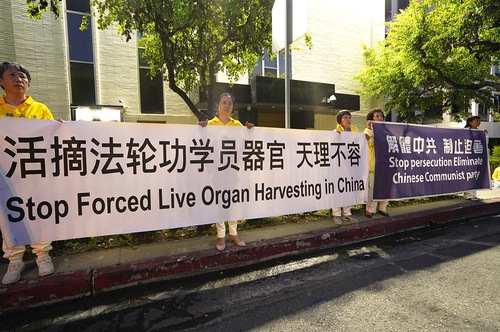 Practitioners from the greater Los Angeles district gathered outside the Chinese Consulate on April 23, 2022, to commemorate the 23rd anniversary of the peaceful appeal held in China on April 25, 1999. 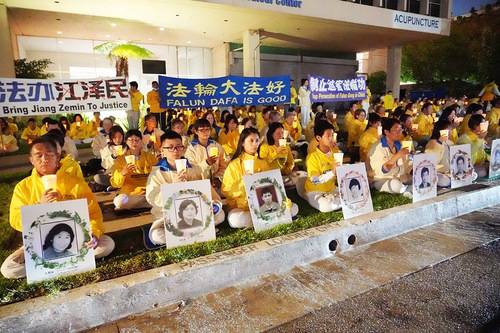 Practitioners held a candlelight vigil at night to remember practitioners tortured to death during the CCP’s brutal persecution campaign.

We Will Commemorate This Day Every Year Forever 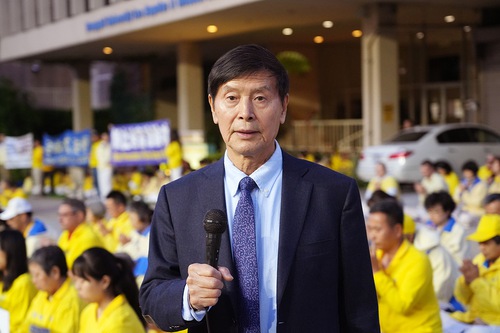 “We will commemorate this day every year forever,” said Li Youfu, director of the Southwestern Falun Dafa Association. “On this night, we hold a candlelight vigil to remember the practitioners who died from the persecution.”

He continued, “Twenty-three years ago, on April 25, Falun Dafa practitioners made an appeal. A never seen before calm and peaceful appeal in the hopes that the government would not suppress this mind-body practice. They felt that the spread of Falun Dafa would bring China and its people good fortune and honor.”

“However, the then-president Jiang Zemin rejected practitioners’ kind proposition and forced his colleagues to jointly launch an unprecedented brutal suppression that continues to this day.”

There Were No Clashes During the Appeal 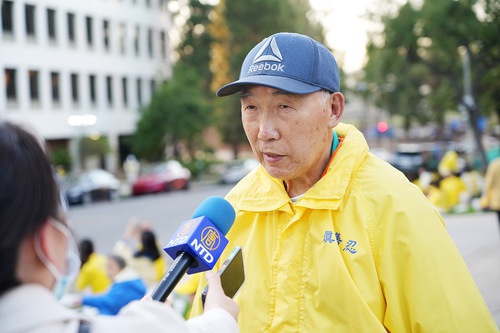 Ou Fanghang, a former engineer in Shenyang now living in Los Angeles was one of the appellants at the April 25 protest 23 years ago. He said that the night before, on April 24, he learned that practitioners were arrested in Tianjin for no reason. He and about twelve other practitioners decided to head for Beijing that night.

He said, “Everyone was mentally prepared. There could only be two outcomes: be arrested or solve the problem. I wanted to uphold Dafa’s dignity.”

Recalling that day Ou Fanghang said they arrived in Beijing on the morning of April 25. Everyone followed the crowd heading towards Fuyou Street. More and more practitioners joined them. They only learned it was Zhongnanhai, the central headquarters of the CCP when they reached the street perpendicular to Fuyou Street. “By then, the roads were filled with people. So, we lined up along the sidewalk. Some practitioners sat and read Zhuan Falun or meditated. In the afternoon, we went to the shops to buy something to eat.” All the practitioners waited quietly from morning to night. “We were waiting for the nation’s leaders to see us.”

Practitioners raised three requests in the appeal: release the practitioners detained in Tianjin; allow Falun Gong books to be published; give practitioners the right to practice cultivation legally. Just past 9 p.m, they were told that the problem was resolved. Mr. Ou said, “We were delighted and said we could go home. Everyone began to pick up the rubbish. The place was cleaner than before we came.”

As one who was present at the appeal, he said the entire process was orderly, unlike the CCP’s claims that practitioners surrounded and besieged the government headquarters. “The police chatted among themselves. As time passed by, they let down their guard as everyone was calm and the atmosphere was peaceful.” 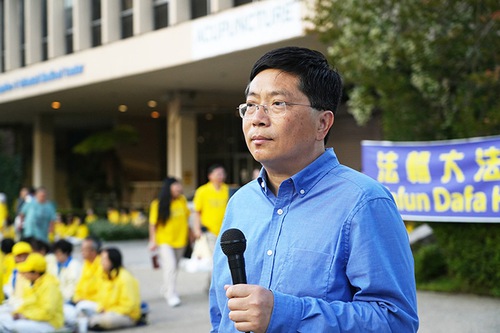 According to Professor Wu Yingnian, spokesperson for Falun Dafa practitioners in Los Angeles, plenty of evidence indicates that the April 25 appeal was used by the CCP as an excuse to launch the persecution on July 20 that year.

He pointed out that the entire suppression was the result of the Party’s twisted nature. The regime’s iron-fisted control of its citizens can be seen in its current “zero out policy” of the COVID virus.

He said, “Therefore, we call on people from all walks of life, including Chinese citizens to pay attention to this persecution and protect Falun Dafa practitioners. Help us end this brutal suppression.”

Don’t Be Misled by the CCP’s Lies 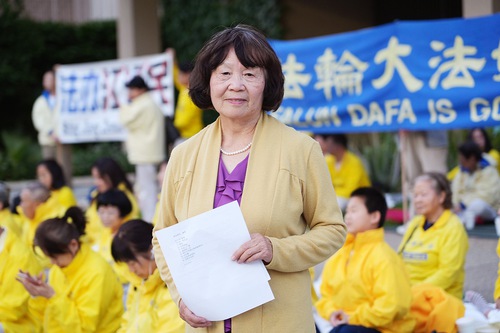 Helen Li, president of the Quit the CCP Service Center in Los Angeles

Helen Li, president of the Quit the CCP Service Center, Los Angeles Branch said that 23 years ago, the peaceful appeal by practitioners on April 25 made a lasting impression on the international society. Practitioners’ efforts in calmly resisting the persecution throughout the past 23 years have helped many countries and people realize the beauty of Falun Dafa, see the evil nature of the CCP, and reject its ideology. To date, over 394 million Chinese nationals have renounced their membership in the CCP and its affiliated organizations through the Quit the CCP website.

Helen wants to tell people, “Don’t be misled by the CCP’s lies, find out the truth quickly, stand on the side of justice and be responsible to yourself.”

Mr. Ye Ke, a professor of public policy at the University of Southern California, said, “Falun Gong practitioners are fighting for their own freedom as well as the freedom of all Chinese. Their commitment to Truthfulness, Compassion, and Forbearance is preserving the most fundamental values of the Chinese people as well as the world’s civilization. People should make the right choice in deciding whether to condemn and stop the persecution, or continue to be indifferent and shake hands with the CCP.”

“A Process of Finding My Righteous Thoughts by Eliminating Attachments”