They displayed large banners which had messages about practitioners’ peaceful appeal 23 years ago, and that called for an end to the persecution. They also demonstrated the exercises and distributed information about the persecution. Many passersby took the information and expressed their support for Falun Dafa. 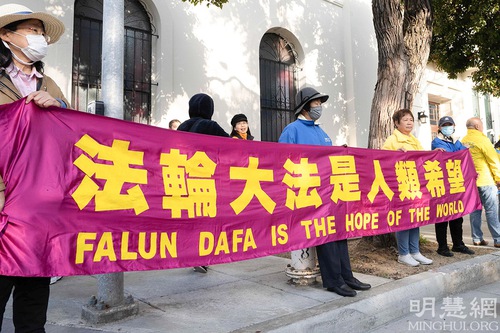 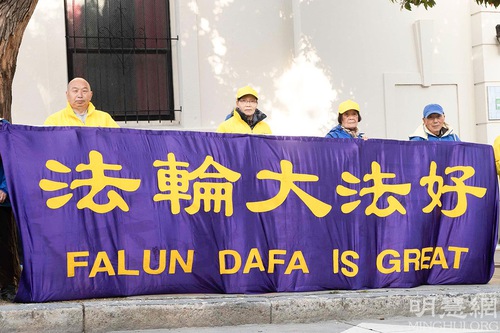 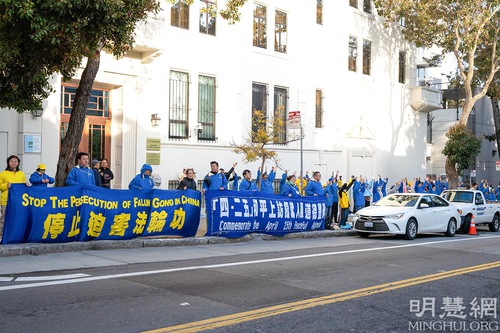 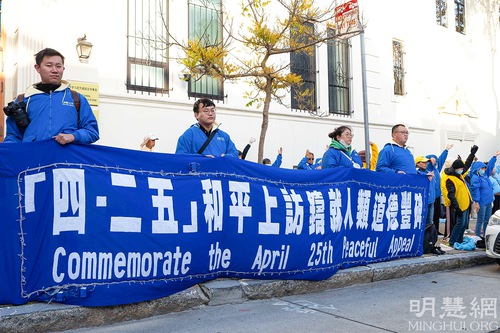 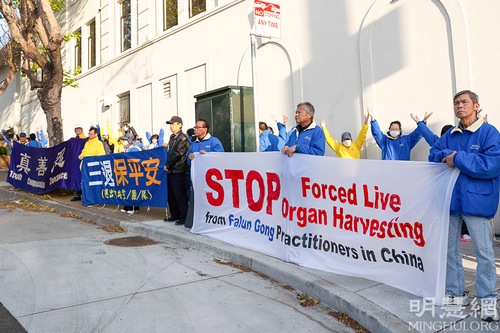 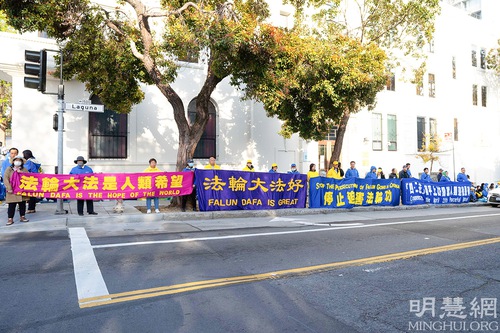 Practitioners held an event in San Francisco to commemorate the 23rd anniversary of the April 25 Appeal.

On April 25, 1999, over 10,000 practitioners went to the Appeals Office of the State Council in Beijing to call on the authorities to release practitioners who had been arrested by the Tianjin public security officers. They also asked the government to lift the ban on the publication of Falun Dafa books and the right to practice Falun Dafa in China.

Mr. Cai Jun, who lives in Sacramento, learned about Falun Dafa from online news that day. He was curious about what gave 10,000 people such courage. He found the book Zhuan Falun online and started reading it.

“I was shocked to find that this was exactly what I had been looking for!” Excited, Jun read the entire book that night and found answers to all his questions. It was almost dawn by the time he finished reading. He searched online for information about where he could learn the exercises locally and called the contact person.

“I learned about cultivating one's character, looking within, and how to be a good person,” Jun recalled. “The April 25 Appeal was a peaceful and rational request to the government to allow people freedom of spiritual pursuit. The persecution has lasted 23 years. The CCP's attempt to suppress Truthfulness-Compassion-Forbearance was doomed from the start.”

Ms. Chen Yuxiao, a financial officer, also learned about Falun Dafa through the April 25 Appeal and decided to learn more. She said she personally benefited from the practice in the past 23 years and felt fortunate and proud to be a practitioner.

Ms. Yuxiao said, “Everyone has the right to cultivate Truthfulness-Compassion-Forbearance. Falun Dafa practitioners peacefully expressed their rights during the April 25 Appeal. They quietly stood on the street and even picked up the cigarette butts the policemen tossed on the ground. Many policemen said they wished all Chinese people behaved like Falun Dafa practitioners. However, the Chinese Communist Party smothered the opportunity of moral revival in China.”

Mr. Zhang Zengjun, an engineer at Google, used to suffer terrible headaches. Neither Western nor Chinese medicine could help. After practicing Falun Dafa for a couple of months, his headaches stopped and did not come back. He hopes practitioners in China regain their freedom, and that more people will help stop the persecution.

“Blessed by the Extraordinary Healing Power of Falun Dafa”