Home > News & Events > April 25 Events
Young Woman in Milan, Italy: “Your Efforts Have Inspired Me and Given Me Courage to Share the Information With More People”
April 26, 2022 | By a Falun Gong practitioner in Italy

(Minghui.org) April 25 this year marks the 23rd anniversary of Falun Gong practitioners’ peaceful appeal in Beijing. Practitioners gathered at the city center of Milan, the second most populous city in Italy, on April 23 to commemorate this occasion calling for an end of the 23-year-long persecution. 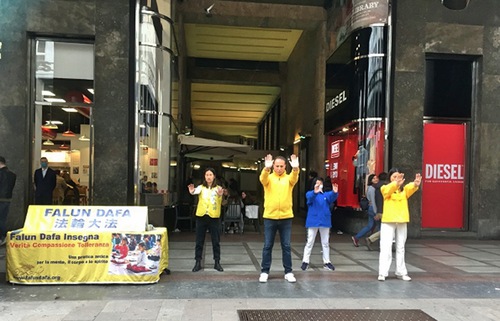 Falun Gong practitioners at an information booth in Milan, Italy, on April 23 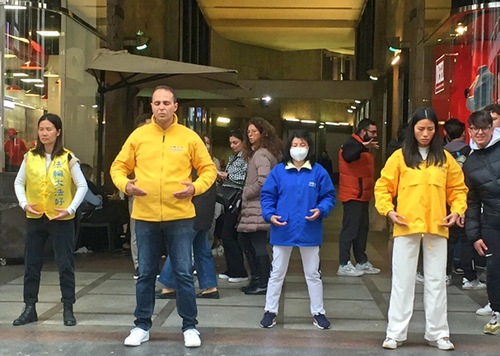 Although the gathering was exceptionally peaceful, and then-Premier Zhu Rongji met with practitioners and agreed to honor their requests, the official oppression accelerated soon after this event, which was later labeled as an “attack” on the central government. Then communist regime leader Jiang Zemin officially started a reckless persecution campaign against Falun Gong on July 20, 1999. Practitioners outside of China have since been holding events every year at this time to clarify the facts and call for an end to the brutality in China. 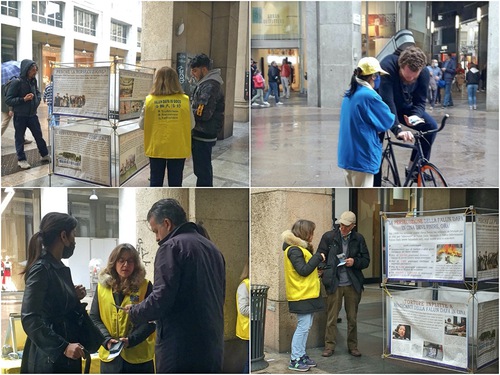 Passersby read materials and talk with practitioners for learn more.

One local resident said he had hard about the persecution against Falun Gong in China. “To make things worse, the [CCP] regime even killed practitioners and sold their organs for profit.” He asked, “Has any government done anything to stop it?” One practitioner told him that some government organizations, such as Parliamentarians Against Forced Organ Harvesting (PAFOH) in Australia, and NGOs such as Doctors Against Forced Organ Harvesting (DAFOH), had been raising awareness of the atrocity for years. The resident was shocked to hear the crime still continued in China today.

One Mexican tourist who accepted a pamphlet in Spanish said, “I know what the CCP has done and it is really disgusting.” Having been to Xinjiang and Hong Kong previously, she knew the poor human rights conditions over there. Upon hearing there was a group practice site at Guadalajara, the Mexican city where she lived, she was very happy and said she would follow up there.

One couple from Rome was traveling with their daughter. When a practitioner explained to them what was going on, the father listened attentively and said the information was very valuable. He thanked the practitioner and said he would explore more about the practice.

A French couple picked up a pamphlet and listened to a practitioner talk about the efforts around the world to expose the brutality of the CCP. “I know it is not easy to do all this,” said the wife, “It takes a lot of courage to do so.”

“I cannot believe something so horrible is happening in our world today,” one local resident remarked as she read the posters, “I want to know more, and could you tell me if I can join the meditation somewhere?”

“We should all condemn what the CCP has done,” an elderly woman commented, “We all know things will change someday, as it cannot continue like this for long.”

One young woman came to the information booth with her mother. “This is something banned in China,” she turned to her mother and said.

As they chatted with a practitioner, they talked about the Great Chinese Famine (1959 – 1961), the Cultural Revolution (1966 – 1976), Tiananmen Massacre (1989), and the suppression of Falun Gong (1999 – present). The young woman said she had learned Chinese in the past and had stayed in China previously.

“You know, the CCP has manipulated textbooks and distorted history – even some college professors in China were brainwashed and helped the regime spread lies,” she added, “But I know what are facts and what are not.”

Upon leaving, the mother and daughter asked for some materials for their friends. “I have known some of these facts in the past. Nonetheless, what you said is still shocking,” said the young woman, “Your efforts have inspired me and given me courage to share the information with more people.”