(Minghui.org) Falun Dafa practitioners set up display boards, banners and handed out information near the Sannomiya bus station in Kobe City, Japan on April 16-17, 2022. They told people about the ongoing persecution in China. They also asked them to sign the petition to stop the atrocities and help rescue a practitioner who is incarcerated in China for refusing to give up her spiritual belief, Falun Dafa. 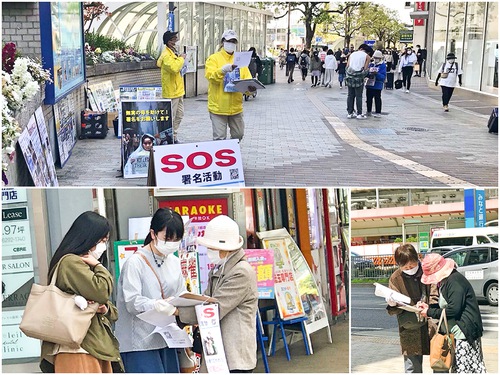 Practitioners in Japan’s Kansai region held a two-day event near the Sannomiya bus station in Kobe City. They told people about the ongoing persecution in China and asked them to sign a petition to rescue practitioners detained for refusing to give up their faith.

Fu Weitong works in Japan and practices Falun Dafa. Her mother Mao Jiaping, a practitioner who lives in Dalian, China was illegally arrested on June 2, 2021, and is still detained. Since her arrest, Ms. Fu and other practitioners in Japan have been raising awareness about the persecution in China through various means as well as calling for help to rescue Ms. Fu’s mother.

This April the COVID restrictions in various parts of Japan were gradually lifted. Since it’s also the annual cherry blossom festival, many people traveled to Sannomiya, the busiest area situated in downtown Kobe city the day practitioners held their activities. Many local residents and tourists stopped to read the display boards and took information to read. They signed the petition to call for the release of detained practitioners in China. Many people encouraged practitioners and told them to, “Keep up the good work.”

A Chinese citizen who lived and worked in Japan for 7 years decided to renounce his membership in the Chinese Communist Party (CCP) after learning the truth about the persecution.

Mr. Kamiura who lives in Nishinomiya city is in his 50s. He told practitioners he wanted to learn the exercises after signing the petition and asked for the addresses of practice sites near his home. He said that he knew Falun Dafa was good, because he spoke to practitioners years ago when he was in Taiwan. Now that he has returned to Japan, he wants to learn it.

Mr. Maeda from Akashi City signed the petition after practitioners told him about the brutal torture suffered by detained practitioners in China and the forced organ harvesting atrocities. He said, “Persecution of human rights should not be tolerated no matter where it takes place and has nothing to do with national boundaries. Taking organs without consent and selling them for profit should be expressly stopped. Although this is happening in China, oppression of freedom should not be allowed regardless of where it takes place.”

Another Japanese citizen who signed the petition told practitioners that a government like the CCP regime that persecutes its own citizens cannot last for long and that organ harvesting should be sanctioned internationally.

Because of the pandemic, most Japanese people pay attention to maintaining social distance (6 ft.) when interacting with others. Yet during the activities practitioners said they felt the kindness and sincerity of the people. Many people stopped to read the display boards. They asked questions about the persecution and signed the petition. They also encouraged practitioners, telling them they are courageous and must continue exposing the persecution.