(Minghui.org) Mr. Li Hongzhi introduced Falun Dafa to the public by giving a series of lectures, which were recorded when he taught in Guangzhou, China. The Nine-Day Lecture series, along with Falun Dafa’s main book Zhuan Falun are considered essential in understanding the basics of practicing Falun Dafa. Practitioners, veteran and new, watched the lecture series in Whanganui located in northern New Zealand between March 30 and April 19. They said it enhanced their understanding of how to cultivate themselves, look inward, and improve in their daily lives. 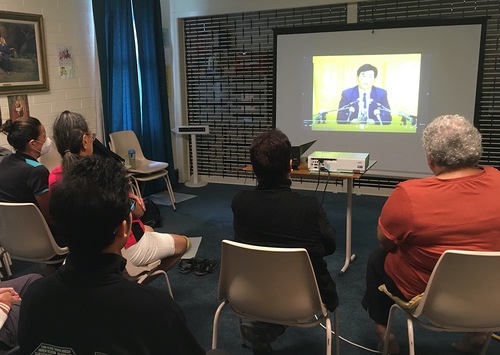 Practitioners in New Zealand watched the video recordings of Master’s Nine-Day Lecture series given in Guangzhou. The sessions were held March 30 - April 19 at Whanganui. 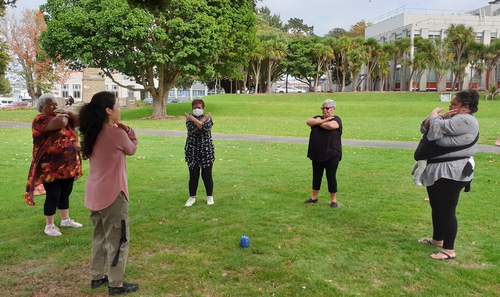 Along with watching the videos, practitioners did the exercises outdoors

Retired Special Forces Member: I Found What Was Missing in Life

Mereana was a soldier and served in the wounded brigade and military hospital. She was later invited to join the special forces. She currently volunteers at numerous organizations and is a community leader.

Impressed by Falun Dafa’s teachings, she said Master Li talked about very profound things. She felt she needed a deeper understanding, so she attended the lecture series. “Different from various religions, the principles of Falun Dafa emphasize that practitioners begin improving themselves by looking within,” Mereana explained. “This is the best path forward in this chaotic society. Falun Dafa teaches one to pay attention to moral character, instead of material interest – this is how mankind can get back on track.”

She said the principles of Truthfulness-Compassion-Forbearance helped her find what she lost in life. In fact, such a practice would benefit everyone including children. “This way, the young generation will have a more promising future. Our society will improve too, as many problems would be resolved and disappear,” she added. 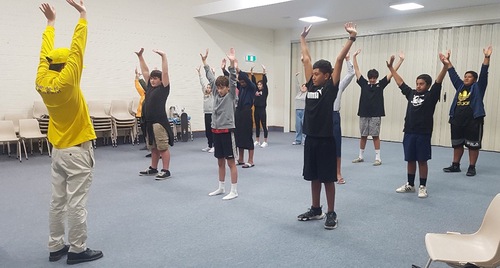 After she finished watching the second lecture, Mereana was surprised to find that the knee problems that had bothered her for many years were gone. “I am so thankful because Master Li has helped purify my body as soon as I began to practice,” she said. Glad to hear Falun Dafa teachings are available in over 40 languages, she hoped there would be an edition in Māori as well.

Learning to Handle Situations in a Positive Way

Karl Webb was fond of Chinese martial arts since he was a child. When he lived at Christchurch he learned the Falun Dafa exercises from practitioners. After he later moved to Whanganui he met local practitioners and joined the group Fa study and group exercises.

This was the first time Karl watched the lecture series. “I was very touched when I saw Master Li in the video and the lectures helped me better understand Falun Dafa’s teachings,” he said. “The principles are very profound and I gained new understandings along the way. Falun Dafa taught me to remain calm when facing conflicts,” he said. “When we have no pursuit of result and focus on handling issues in a compassionate manner, we stay on track and life is productive.”

Tina said watching the Nine-Day Lecture series was mind-opening for her. “Master often uses some examples in life to explain profound principles. I found it very easy to understand,” she said. “The lectures are not only fascinating, but also helpful in guiding me on how to face various situations in life.”

“For example, we should not worry too much about the other side or the result. As practitioners, we should instead pay attention to looking inward and really improving ourselves,” she said. “Our righteous mindset and actions will lead to a better outcome.”

Eros said he started to practice Falun Dafa as a child with his mother. But this was the first time he’s watched the Nine-Day Lecture series and it helped him to understand the teachings better. He also learned that cultivation is very serious and one must be diligent.

During discussions, new practitioners shared their stories about coming to the lecture seminar. Some of them experienced various difficulties, but they were able to overcome the interference and attend. “I also found that learning Falun Dafa is a precious opportunity. I will cherish it and do better,” Eros said.

Diana started to practice Falun Dafa over 20 years ago and this was the third time she had seen the videos of Master’s Nine-Day Lecture series. “When watching it for the first time back then, I had a pure mind and was drawn to the lectures,” she said. “Now I noticed I have various human notions such as an attachment to comfort.”

She said those were some of the reasons she did not do better in cultivation. “When watching the video lectures with new practitioners, I learned the importance of maintaining a pure mind,” she explained. “Master also helped remove lots of thought karma for me. I am so thankful.”