(Minghui.org) Located in the eastern region of India along the Bay of Bengal, West Bengal is the fourth-most populous state with over 91 million inhabitants, the majority of whom are Bengali. The capital, Kolkata, is India’s seventh largest city by population. The annual Kolkata Book Fair is a popular event. It is the largest non-trade book fair in the world open to the general public. It is also the largest book fair in Asia and a major cultural event in West Bengal, India.

Falun Dafa practitioners have been invited to participate in the book fair every year since 2015. Various Falun Dafa books and audio-visual materials are offered at their booth. Among them are two Falun Dafa books in Bengali, Zhuan Falun and Falun Gong. The translations into their language has helped many Bengali-speaking people understand Dafa. The two books were translated by Dr. Utpal Bit, 64-year-old dean of the plastic surgery department at Calcutta Medical College (officially Medical College and Hospital, Kolkata.) 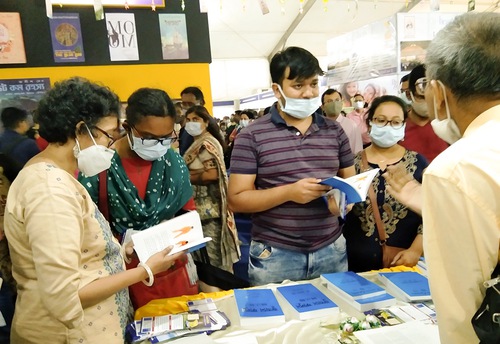 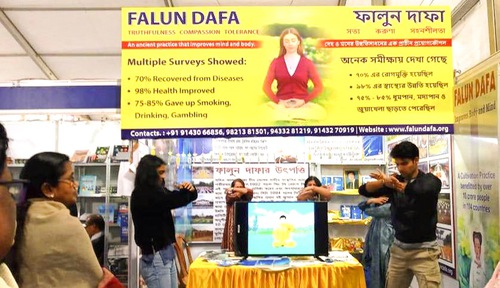 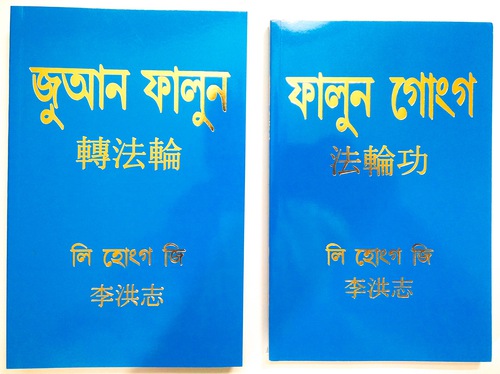 Zhuan Falun and Falun Gong are available in the Bengali language,

Seeing Dr. Bit in high spirits now, it’s hard to imagine that he was tortured by ailments ten years ago. As a doctor who heals and saves people, but cannot treat himself, it saddened Dr. Bit.

Dr. Bit tried different meditation and practice methods. He said they were like adding a little oil to a machine to make it run better. But he says Falun Dafa gave him a brand new machine with new parts. “Now in my 60s, I have the energy and physical strength of a young man. I am the head of the plastic surgery department at Calcutta Medical College. I treat many patients and deal with various emergencies every day. I have done more than a thousand surgeries but the change in myself is the most incredible miracle of my career as a medical doctor.” 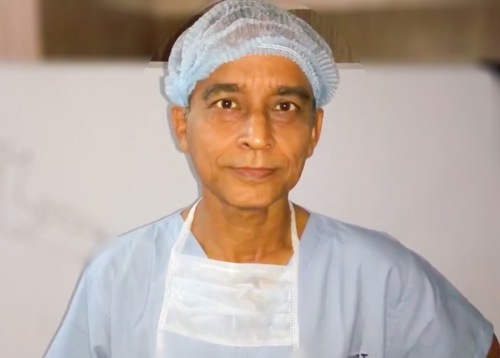 When he was in his 20s, Dr. Bit suffered from chronic bronchial asthma and was allergic to many substances, including dust, pollen, cotton, various foods and even cold air. This led to breathing difficulties, throat infections, and skin diseases. In his 30s, he developed high blood pressure and suffered from knee pain every time he walked or climbed stairs due to his osteoarthritis which was worsened by the steroids he took for his asthma. His asthma and allergies made his life miserable. Normal work and life became a luxury, and he relied on daily inhalation therapy and antibiotics to get through his days. Living became a painful burden for himself and his family.

Dr. Bit began to look into spirituality in 2004. He followed many mentors, studied various schools, and read numerous books. His family became accustomed to him constantly trying all kinds of new things. In October 2011, a friend recommended he look into Falun Dafa. To his surprise the first time he practiced the exercises, his asthma miraculously disappeared, and his allergy symptoms also improved significantly. In the past, due to asthma, he couldn't lie flat when he slept, and he often woke up because of suffocation. That night, he had a long, restful sleep.

He downloaded the audios of the Nine Lectures. He listened to Master Li’s lectures and practiced the exercises every day. After a few months, his knees were no longer sore when he walked or climbed stairs. Now in his sixties, Dr. Bit can walk for hours without feeling tired, something that he could not dream of when he was in his 30s.

His wife and mother-in-law teased him when he started to practice Falun Dafa, thinking it was just another new thing he picked up and would drop. However, with the improvement of Dr. Bit’s health, his family members changed from disbelief, to shock, to being convinced, and now they practice Falun Dafa with him. 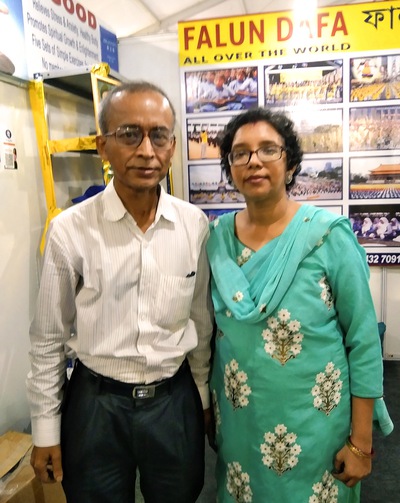 Dr. Bit said that he was very self-righteous before he began practicing Falun Dafa. Decades of education and life experience made him feel great about himself. Little things made him angry if others didn't do as he requested. He also attached great importance to money and fame. If he felt he was treated unfairly at work or in society, he complained and became jealous. At home, he was the sole decision maker and never listened to his wife.

After embracing cultivation practice, his pursuit of fame and fortune gradually diminished. When confronted with contradictions, he learned to analyze his own thoughts and behavior based on the principles of Truthfulness-Compassion-Forbearance, identify his own deficiencies and work hard to correct them.

Once five medical students in the department took an examination. After the grades came out, a student publicly expressed his dissatisfaction and accused the teacher of unfairly grading him. As head of the department, it was Dr. Bit who handled the matter. He understood that this was a long and hard exam, that it was not easy for students to complete it, and it was not easy to give fair marks. He also found two students gave the same answer to one question but received different scores.

After the investigation was completed, Dr. Bit told the student that there was indeed a problem with the grading, which was his responsibility as the department chair, and there should be a more rigorous grading mechanism. It would be unimaginable for Dr. Bit to admit this if it happened before he began practicing Falun Dafa.

His colleagues were surprised at his attitude and his answer to the student. Some of them felt Dr. Bit didn’t need to apologize. Dr. Bit says practicing Falun Dafa taught him to be humble. “It’s hard for a person to admit their mistakes, but now I don't find it that hard,” he said.

He also became considerate and kind at home. Now he discusses issues with his wife and considers her input. She can also point out his shortcomings and he works on himself to correct them.

Dr. Bit introduced Falun Dafa to his friends, family, and colleagues. Many people wanted to learn more about Falun Dafa, however, there were only books in Indian and English while most people in West Bengal only read the Bengali language. A friend asked Dr. Bit why there were no Falun Dafa books in Bengali and suggested he translate some.

In 2013, Dr. Bit started a three-year journey of translation and publication of Dafa books in Bengali. In order to better understand the original work, he learned Chinese at the suggestion of a veteran practitioner. He downloaded Falun Dafa books in Chinese, bought a Chinese-English dictionary, and learned Chinese Pinyin. Every day on the way to and from his work, he listened to the recordings of Mr. Li Hongzhi’s “Teaching the Fa in Guangzhou,” “Teaching the Fa in Dalian” and “Teaching the Fa to Australian Students.”

Even though there were many challenges, he felt that he must persevere since he benefited so much from Dafa. Sometimes when he was very busy, the entire family helped—his wife typed, and his son proofread.

Zhuan Falun and Falun Gong in Bengali were published in 2016. Looking back on this journey, Dr. Bit said that he would not be able to do all this without Master’s help. “When I encounter difficulties, and I’m determined to overcome them, there’s a turning point. It’s just like that worn and weary traveler—you’ll see, “the shade of willows, the blooms of flowers, a place to rest my head!” (Zhuan Falun)

Since 2015, Falun Dafa practitioners in India have been invited to participate in the Kolkata Book Fair. Since 2016, Zhuan Falun and Falun Gong in Bengali have caught people’s attention. Every weekend the booth was crowded with people who came to talk with practitioners and buy Dafa books. Practitioners demonstrated exercises accompanied by beautiful and soothing music which also attracted many people. Many people learned the exercises after buying the book.

Expo staff and other booksellers also became fans of the Falun Dafa booth. The owner of the booth next door came to learn the exercises every day when he was free. Some police officers on duty chatted with practitioners and learned about Falun Dafa.

The 2021 Kolkata Book Fair was canceled due to the COVID pandemic. Dr. Bit and fellow practitioners started to hold weekly Falun Dafa introduction sessions on the Internet. Many people from West Bengal as well as neighboring Bangladesh attended. In addition, there are online teaching sessions twice weekly, and many people start to practice Falun Dafa through this method. New students can also have a cultivation environment during the epidemic and make continuous progress.

Mr. Prodyut De was diagnosed with carpal tunnel syndrome in his hand. Surgery did not help and he later had pain and spinal issues. His knees could barely bend so he couldn’t go upstairs any more.

Mr. De attended a Falun Dafa introduction class held near his home and learned the five sets of exercises on the spot in March 2020. After that, Mr. De practiced the exercises twice a day. His condition greatly improved after 4 months. “I could write and do other tasks with my hands. I seem to have a new life. I can sit down and do laundry and do all the work that requires bending my knees easily.” Mr. De said.

Mr. De attributed his new life to Master Li Hongzhi, “Truthfulness-Compassion-Forbearance has given me a new life, freed me from suffering, and allowed me to have a healthy life again. I sincerely thank and admire Master Li Hongzhi.”

Many practitioners’ experiences are similar to Mr. De’s. People introduce Falun Dafa to their relatives and friends after they benefited both physically and mentally. Through word of mouth, many people began to practice Falun Dafa.

Dr. Bit is a typical example of countless practitioners. Practicing Falun Dafa has transformed them from exhausted people into cultivation practitioners who strive to assimilate to Truthfulness-Compassion-Forbearance and sacrifice for others.

“These ten years after I began practicing Falun Dafa is the real life for me, as I now understand why we are here. Falun Dafa lights up my life, and it also shines on everyone I come into contact with,” Dr. Bit said.

“My Family and I Benefit from Dafa”