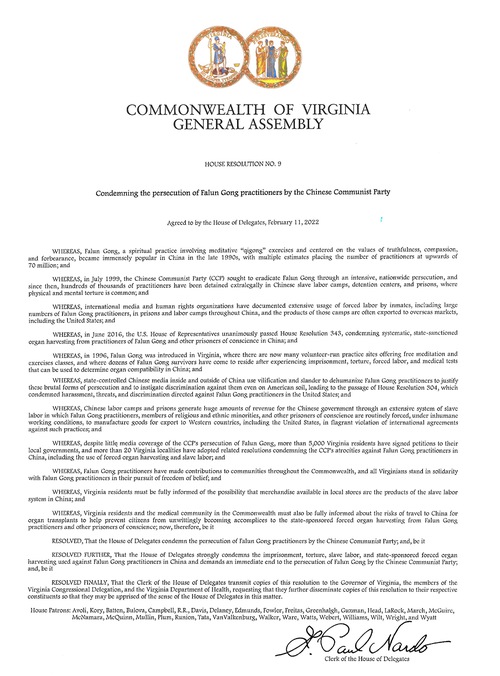 House Resolution No. 9 passed by the Virginia General Assembly on February 22, 2022

Initiated by Republican Virginia Delegate John Avoli and Democratic Delegate Kaye Kory, this resolution was co-sponsored by 31 House members. In addition to condemning the torture, forced labor, and organ harvesting of Falun Gong practitioners by the Chinese Communist Party (CCP), it called to expose the CCP’s brutality to the public and end the atrocities immediately.

“H.R.9 aims to highlight the severe human rights violation committed by the CCP,” explained Delegate Avoli during a hearing on February 8. The resolution also helps Virginians to understand the vicious forced labor and organ harvesting taking place in China, a major trade partner of the United States.

Falun Gong is a spiritual practice that teaches the principles of Truthfulness-Compassion-Forbearance. The CCP has been persecuting this peaceful practice since July 1999. The U.S. State Department has confirmed in various reports over the 20-plus-year persecution that the CCP has sent Falun Gong practitioners to labor camps where they are forced to work under inhuman conditions. In fact, such forced labor products are widely available for purchase in the U.S. The CCP has also extracted practitioners’ organs for profit in organ transplant surgeries.

Tatiana Denning, a family physician in Virginia who practices Falun Gong, testified in the hearing. “While this has been widely underreported, grassroots support has been very strong locally, throughout the state,” she said. “We see House Resolution 9 as an expression of our collective conscience. It will prevent Virginia residents from becoming unwitting accomplices to the murder of innocent people. It will also help educate our citizens that the Chinese people and the Chinese Communist Party are not one and the same.”

Wang Chunyan, a survivor of the persecution, also attended the hearing. Like other Falun Gong practitioners, she had benefited both physically and spiritually from the practice. Because of her belief, however, she was held in a labor camp for 7 years.

“She [Ms. Wang] was forced to do slave labor 18 hours a day. And over 20 other Falun Gong practitioners she knew have lost their lives due to the suppression,” explained Dr. Denning. “Blood samples were also taken during her detention for tissue compatibility for organ transplant. That is, the CCP authority viewed her as a potential organ ‘donor’.”

The atrocity of forced organ harvesting from Falun Gong practitioners by the CCP is widely known in Virginia. In 2021 alone, 24 local governments in the state passed similar resolutions to raise awareness of this issue. Elected officials have been very thankful for this vital information from Falun Gong practitioners, as without it they would not know about this persecution – especially the forced organ harvesting, which has lasted for more than 20 years.

In a General Assembly meeting on January 25, 2022, Delegate Kaye Kory introduced Falun Gong practitioners and the practice system to her colleagues. One of her interns who worked for her four years ago was a Falun Gong practitioner, whose father died as a result of the suppression in China. Ms. Wang had suffered terribly as well, and her husband died trying to protect her. The jacket she brought to the hearing was the one she wore while she was detained. 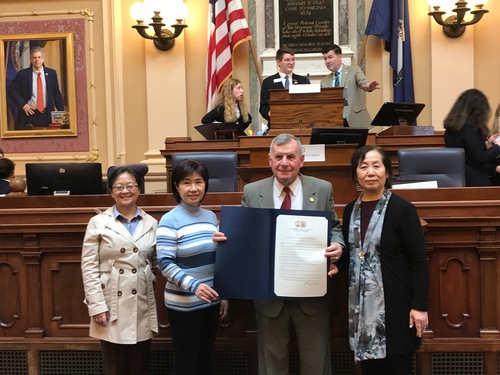 Delegate Avoli said he was happy to see this resolution passed unanimously. He looked forward to more resolutions like this in other states. With the combined efforts of the U.S. Congress and the White House, they hope to bring the suppression to an end.

A full text of the resolution is included below and it is also available online here.

WHEREAS, Falun Gong, a spiritual practice involving meditative "qigong" exercises and centered on the values of truthfulness, compassion, and forbearance, became immensely popular in China in the late 1990s, with multiple estimates placing the number of practitioners at upwards of 70 million; and

WHEREAS, in July 1999, the Chinese Communist Party (CCP) sought to eradicate Falun Gong through an intensive, nationwide persecution, and since then, hundreds of thousands of practitioners have been detained extralegally in Chinese slave labor camps, detention centers, and prisons, where physical and mental torture is common; and

WHEREAS, international media and human rights organizations have documented extensive usage of forced labor by inmates, including large numbers of Falun Gong practitioners, in prisons and labor camps throughout China, and the products of those camps are often exported to overseas markets, including the United States; and

WHEREAS, in June 2016, the U.S. House of Representatives unanimously passed House Resolution 343, condemning systematic, state-sanctioned organ harvesting from practitioners of Falun Gong and other prisoners of conscience in China; and

WHEREAS, in 1996, Falun Gong was introduced in Virginia, where there are now many volunteer-run practice sites offering free meditation and exercises classes, and where dozens of Falun Gong survivors have come to reside after experiencing imprisonment, torture, forced labor, and medical tests that can be used to determine organ compatibility in China; and

WHEREAS, state-controlled Chinese media inside and outside of China use vilification and slander to dehumanize Falun Gong practitioners to justify these brutal forms of persecution and to instigate discrimination against them even on American soil, leading to the passage of House Resolution 304, which condemned harassment, threats, and discrimination directed against Falun Gong practitioners in the United States; and

WHEREAS, Chinese labor camps and prisons generate huge amounts of revenue for the Chinese government through an extensive system of slave labor in which Falun Gong practitioners, members of religious and ethnic minorities, and other prisoners of conscience are routinely forced, under inhumane working conditions, to manufacture goods for export to Western countries, including the United States, in flagrant violation of international agreements against such practices; and

WHEREAS, despite little media coverage of the CCP's persecution of Falun Gong, more than 5,000 Virginia residents have signed petitions to their local governments, and more than 20 Virginia localities have adopted related resolutions condemning the CCP's atrocities against Falun Gong practitioners in China, including the use of forced organ harvesting and slave labor; and

WHEREAS, Virginia residents must be fully informed of the possibility that merchandise available in local stores are the products of the slave labor system in China; and

WHEREAS, Virginia residents and the medical community in the Commonwealth must also be fully informed about the risks of travel to China for organ transplants to help prevent citizens from unwittingly becoming accomplices to the state-sponsored forced organ harvesting from Falun Gong practitioners and other prisoners of conscience; now, therefore, be it

RESOLVED, That the House of Delegates condemn the persecution of Falun Gong practitioners by the Chinese Communist Party; and, be it

RESOLVED FURTHER, That the House of Delegates strongly condemns the imprisonment, torture, slave labor, and state-sponsored forced organ harvesting used against Falun Gong practitioners in China and demands an immediate end to the persecution of Falun Gong by the Chinese Communist Party; and, be it

RESOLVED FINALLY, That the Clerk of the House of Delegates transmit copies of this resolution to the Governor of Virginia, the members of the Virginia Congressional Delegation, and the Virginia Department of Health, requesting that they further disseminate copies of this resolution to their respective constituents so that they may be apprised of the sense of the House of Delegates in this matter.