(Minghui.org) Today’s news from China includes incidents of persecution that took place in 14 cities or counties in 8 provinces, where at least 18 practitioners were recently persecuted for their belief. 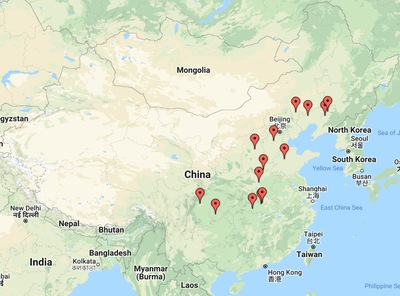 Ms. Qiu Tieling was virtually tried by the Tieling Intermediate Court on January 20, 2022. The court did not notify her family and upheld the original verdict. She was sentenced to three years and fined 2000 yuan.

Ms. Qiu was taken to the Liaoning Province Women’s Prison but her family was not notified.

Ms. Zhang Yuping was sentenced to eight years and six months in prison and fined 30,000 yuan by the Yingze District Court. Ms. Zhang pleaded not guilty and submitted an appeal.

Mr. Lian Chi was arrested on March 8, 2022. His home was ransacked. The police also went to Mr. Zhou Haiqiang’s home and ransacked the place that day. Mr. Zhou was not at home at that time.

The case against Mr. Dong Yiran was submitted to the Yuhong District Procuratorate.

The government officials and police in Hui County have repeatedly come to Mr. Yang Jinhan’s home to harass him since 2018.

Liu Yang and Ren Zhiwei from the Zhangcun Police Station went to Mr. Yang Jinhan’s home and harassed him on March 17 and 18, 2022. They threatened to cut off the water supply and electric power to his home.

Ms. Li Yuzhi, from the Zhangqiu District, was reported to the police when she distributed information about Falun Gong on March 15, 2022. She was taken to the Shuangshan No. 1 Police Station. She returned home that night. Ms. Li was called to the police station again on March 17. She was sentenced to 10 days of detention, which was not carried out due to her age.

Ms. Hu Suping, 72, and Ms. Qiu Chunfang were reported to police when they talked to people about Falun Gong on March 14, 2022. They were arrested by officers from the Chengnan Police Station and held there.

Ms. Qiu was forcibly photographed and had her fingerprints taken at the police station. Chief officer Liu Yong interrogated and yelled at them despite the fact that Ms. Qiu has high blood pressure and Ms. Hu is elderly. The two practitioners were held until 10:30 p.m.

Mr. Tang Jingcheng, from Jiangling County, was arrested by officers from the Xionghe Police Station for distributing Falun Gong informational materials on March 15, 2022. His home was ransacked. Mr. Tang was held in the Haoxue Town Detention Center. It was said he would be held there for ten days.

Ms. Ye Fang, 71, was arrested and had her home ransacked by several police officers on January 19, 2022. She was first held at the Xinjin Brainwashing Center and then at the Pi County Detention Center. She was released on bail on February 25, 2022.

Mr. Dai Xianming, from Yongchuan District, had 770 yuan deducted from his 1,375 pension in September 2020 because he did not give up his faith in Falun Gong. The Yongchuan District Social Security Affairs Center recently suspended his pension completely.

Ms. Zhuang Yuli, from Xiguan Village, Xiguan Town, was arrested by officers from the Xiguan Police Station on March 10, 2022. She was taken to the local labor camp but was denied admission due to the pandemic. She returned home that day.

Mr. Li Xiaoqiang, from the Chengguan District, was taken to the Hujindian Brainwashing Center by officers from the Chaoyang Community Management Office.

Mr. Zhang Jintao went to the East Station of Yunmeng Railway Station to catch the train to Ningbo City to work there on March 7, 2022. After he went through the security checkpoint, the police checked his cell phone and found Falun Gong exercise music. They canceled his ticket, took him to the East Station Police Station, and interrogated him until after 11:00 that night.

Officers from the Chengguan Police Station also came to interrogate Mr. Zhang. The police copied all the documents about Falun Gong from his cell phone and made a list of all the Falun Gong books in his suitcase.

Officers from the East Station Police Station went to his house twice during the interrogation and ransacked it. They confiscated a photo of Falun Gong’s founder, a calendar printed with information about Falun Gong, and a pamphlet. They photographed all the items as evidence to further persecute Mr. Zhang.

The next day around 10:00 a.m., Mr. Zhang’s wife was forced to sign the document for his release on bail.

Gu Caiqing (gender unknown) from Quyang County was arrested on March 5, 2022, when she/he put up banners with messages about Falun Gong. Gu was beaten and tortured while being detained. On March 13, Gu was taken home by his/her family.

Two officers led by village official Zhou Wenxing went to Ms. Yang Yu’er’s home in March 2022. They tried to photograph her, which she refused.

Four village clerks and the police went to her home again on March 9. They photographed Ms. Yang and left.