(Minghui.org) Close to a thousand Falun Dafa practitioners held a grand parade in Brooklyn, New York, on February 27, 2022, to congratulate the over 392 million Chinese people who have quit the Chinese Communist Party (CCP) and its affiliated organizations. Practitioners also raised awareness about the ongoing persecution of Falun Dafa in China and urged people to help end it. During the event, 309 Chinese people quit the CCP.

The parade, which started off on 8th Avenue, featured traditional dragon and lion dances, performances by the Tian Guo Marching Band, colorful flags and banners, beautifully decorated floats, and rousing waist drum performances. Practitioners marched from 41st Street to 59th Street, a total of 18 blocks that encompassed all of Brooklyn’s Chinatown. Spectators said they were excited and surprised by the magnificent scene. Many people took pictures, videos and accepted truth-clarification flyers and hand-made lotus flowers from practitioners.

Ms. Chen watched the parade and said, “I came from China two months ago and feel fortunate to have witnessed this spectacular parade. I took a lot of pictures and I will share them with my friends and family in China.”

Ernesto Castro, Deputy Inspector from the 72nd Precinct in New York, came and supported practitioners throughout the parade. He took pictures with the waist drum team when the parade ended and praised Falun Dafa practitioners. “This is a beautiful parade with beautiful people. Although it is a protest, it is very peaceful and well arranged. The parade was spectacular.”

Three Themes Displayed During the Parade 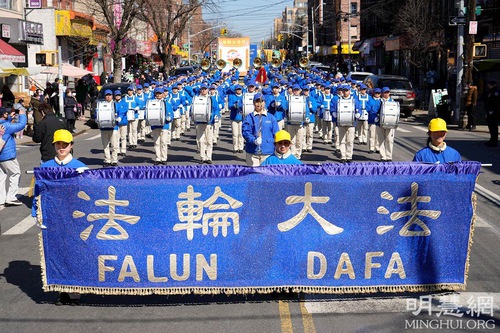 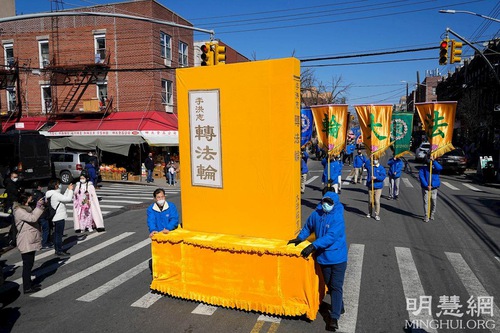 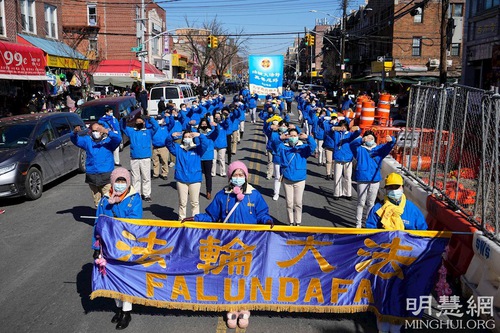 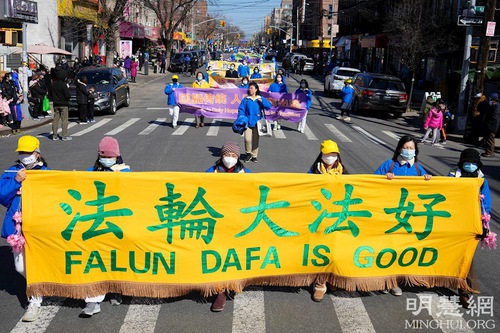 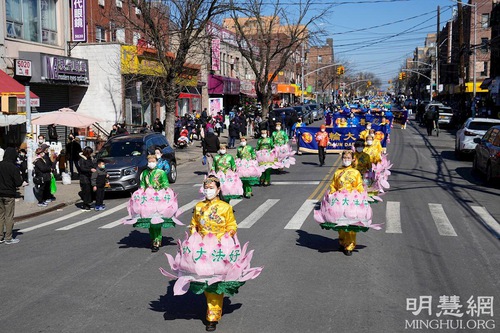 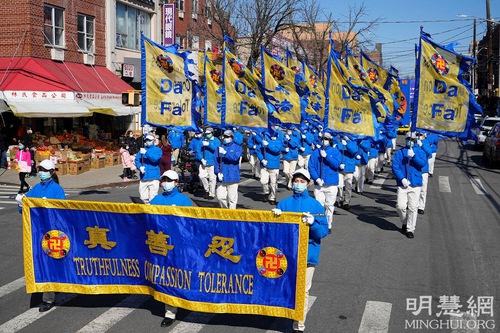 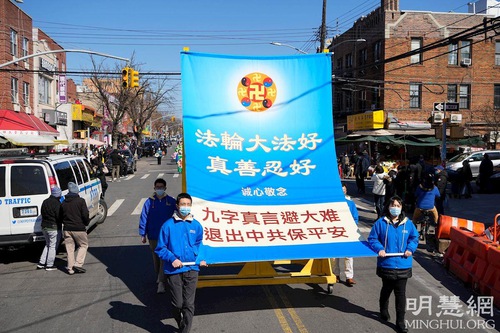 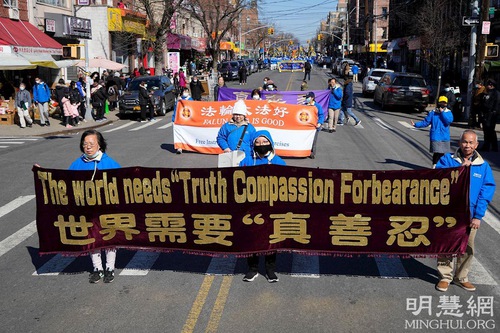 The first theme of the parade was “Falun Dafa is good.” The parade was led by police cars followed by the Tian Guo Marching Band. The band performed melodies, including “Falun Dafa is Good,” “Delivery of Treasure,” “Sacred Song,” and others. The uplifting music, a big and vibrant banner that read “Falun Dafa is good” and a huge model of the main book of Falun Dafa attracted the attention of spectators on both sides of the road.

Mr. Mei, from Taishan, Guangdong Province, China, sat with his friends on the side of the road while watching and video recording the parade. When asked why he was excited, Mr. Mei replied, “I am excited because I am touched by the parade!”

Mr. Mei continued, “Those who practice Falun Dafa are very healthy and are good people. I am touched by how they persist in their faith. I was given many paper lotuses and I display them in my home. Even the calendar at my house was given to me by a Falun Dafa practitioner.”

Another spectator Mr. Li said, “The parade is very exciting. I recite ‘Falun Dafa is good’ every day.” 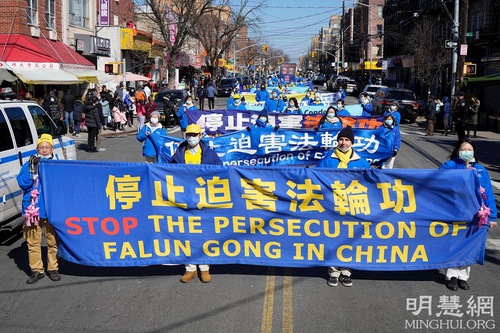 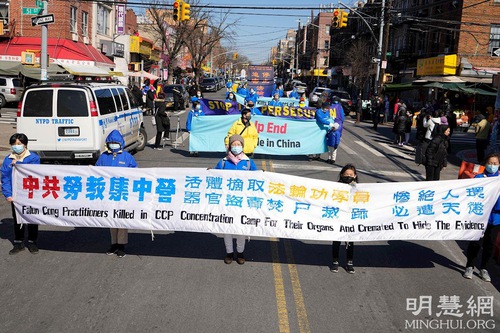 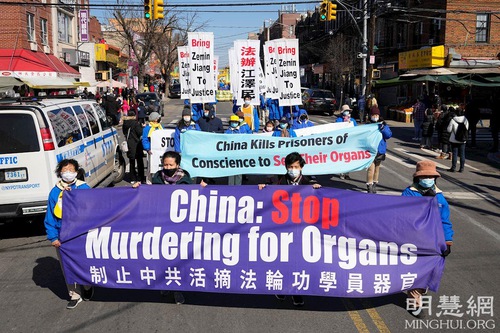 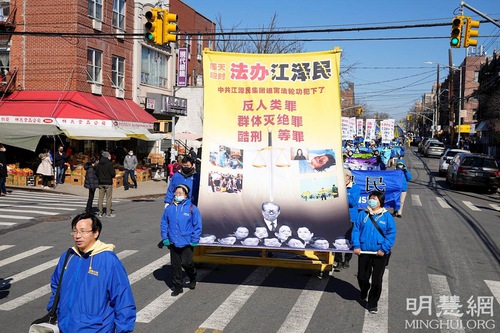 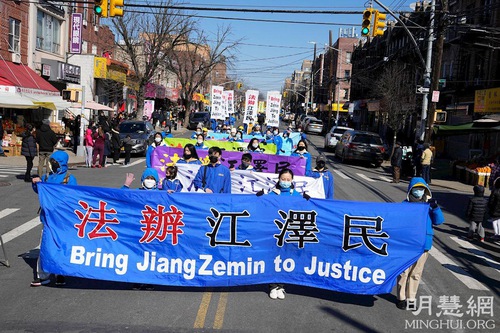 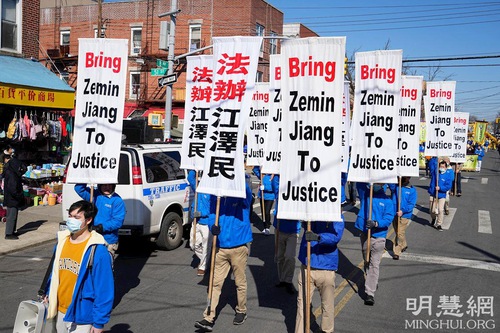 The parade’s second theme, “Stop the Persecution of Falun Dafa.”

The second theme of the parade was “Stop the Persecution of Falun Dafa.” The truth-clarification banners had messages about the CCP’s atrocities of persecuting Falun Dafa practitioners. They called for people of conscience to help stop the persecution and to help rescue practitioners being persecuted in China.

According to statistics on Minghui.org, over 16,000 practitioners were kidnapped or harassed in China in 2021.

Mr. Xiaofeng Zhang, a Falun Dafa practitioner living in Brooklyn, said, “My mother is from Chifeng, Inner Mongolia. She was kidnapped by the police on the first day of Chinese New Year (February 1, 2022). The policemen entered our house and arrested her when my father went to take the garbage out. She went on a hunger strike and eleven days later, she became very sick. The hospital said that she was in critical condition.” He stated, “I hope those who persecuted my mother can walk on a righteous path instead of following in the footsteps of the evil CCP.”

Falun Dafa practitioners have been abiding by the principles of Truthfulness-Compassion-Forbearance for 30 years. For 23 years, ever since the persecution started, they have received support from people worldwide by peacefully protesting.

Spectator Andy Shihadeh said, “I am very happy to be part of this peaceful protest and make people aware of Falun Dafa as a local resident.”

Carlos, another spectator, said, “I have just signed on the petition to stop the persecution.” 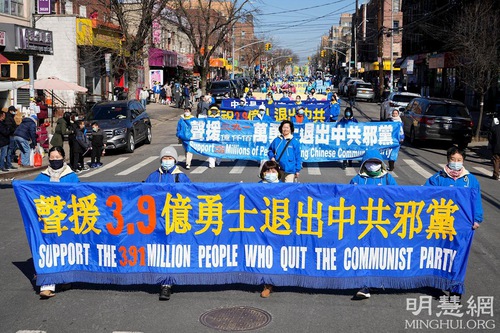 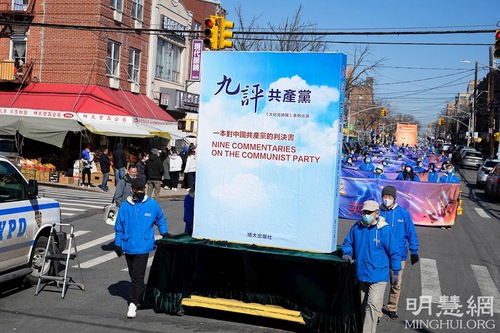 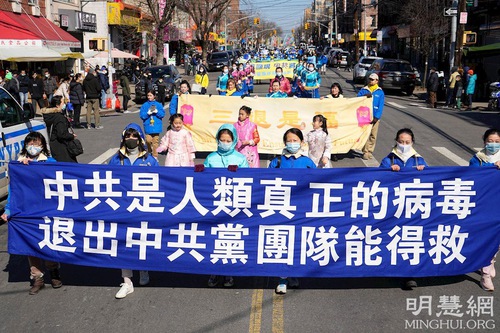 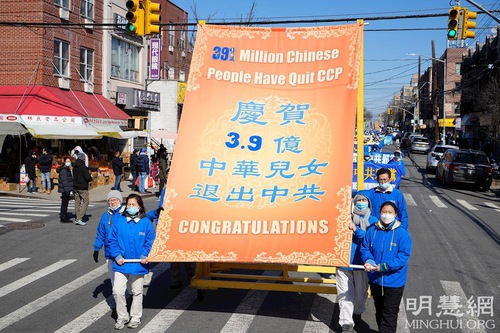 The parade’s third theme, “Celebrate the 392 Million Chinese People Who Quit the CCP and Its Affiliated Organizations”

The third theme “Celebrate the 391 Million Chinese People Who Quit the CCP and Its Affiliated Organizations” calls on people of conscience to understand the true nature of the CCP.

The Nine Commentaries on the Communist Party published by the Epoch Times in November 2004, triggered a global movement of quitting the Chinese Communist Party. It exposed the true nature of the Party and shocked many people both inside and outside China. The first Party withdrawal was received in December 2004 and since then 392 million people have withdrawn from the CCP and its affiliated organizations.

Yi Rong, President of the Global Service Center for Quitting the CCP, said, “This is something worth celebrating, seeing how many people around the world are recognizing the true nature of the CCP and want to distance themselves from it.”

While watching the parade Mr. Gong said, “Withdrawing from the CCP and its affiliated organizations is very significant. One should definitely quit the CCP and I hope even more people will quit the Party. You end up with nothing but bad luck when you follow the regime. It does nothing but bad deeds.”

Chinese People Are Waking Up

Volunteers from the Tuidang Center helped over 309 people withdraw from the CCP and its affiliated organizations on the day of the parade.

During the parade, Ms. Han, a volunteer from the Tuidang Center, talked with a young lady. Ms. Han said, “Miss, do you know about quitting the CCP and its affiliated organizations to stay safe? You are in the United States and need not be scared of the CCP. The regime does not believe in the divine and does all sorts of bad deeds. We need to believe in the Gods to stay safe.”

The young lady said, “Auntie, I do not believe in the divine.” Ms. Han pointed out, “When you joined the Party you vowed to sacrifice your life for it. The CCP will be held accountable for its crimes and you will be implicated because of the vow you made. Look at the magnificence of the parade! Do you know why we hold this parade? We hope to tell you the facts so that you can make the right decision. Many people feel they’ve been blessed and safe from the pandemic because they truly believe and say, ‘Falun Dafa is good. Truthfulness-Compassion-Forbearance is good.’ Let me give you a pseudonym to quit the CCP.” The young lady told Ms. Han her last name and she quit the Party using the pseudonym of “Lin Wenjing”. Before leaving, she accepted a lotus flower and thanked Ms. Han.

Mr. Li, another volunteer from the Tuidang Center, met two Chinese men who were watching the parade. After he greeted them, they said, “Falun Dafa practitioners are at odds with the CCP.” Mr. Li said, “The CCP is at odds with everyone and uses Chinese people. We are all being persecuted by the CCP. Falun Dafa practitioners have had their organs removed while they are still alive. Many CCP officials are corrupt—they drink, gamble, and solicit prostitutes, leading depraved and shameful lives.”

They replied, “Yes, that’s true.” Mr. Li continued, “Falun Dafa practitioners adhere to Truthfulness-Compassion-Forbearance and these principles are the foundation of our ancient Chinese culture. Don’t you think so through watching the parade today?” One man replied, “Yes, you’re right! Falun Dafa is impressive. The day will soon come when there is no more CCP. When that day comes, we will return to China.” Mr. Li helped the men withdraw from the CCP and its affiliated organizations. Before leaving, they accepted truth-clarification flyers and paper lotuses and wished Mr. Li all the best.

Ms. Li, a volunteer at the Tuidang Center, met a man from Fuzhou Province, China. He initially refused the truth-clarification materials and said, “Why should I quit the CCP? I joined it ages ago when I was a young child.” Ms. Li said, “When you joined, you bound yourself to it. When the CCP is held accountable for its crimes you will be implicated as well.” Upon hearing Ms. Li’s words, the man said, “My family suffered under the Chinese communist regime. My parents were killed by the communist regime and I lived a homeless life at a young age.” He said the communist regime is very evil and condemned the CCP’s many crimes. He agreed to withdraw from the CCP and its affiliated organizations and thanked Ms. Li for helping him.

“Sichuan Woman Taken to Nanjing, About 1,000 Miles Away, to Serve Time”