(Minghui.org) [Editors' Note: In both Western and Chinese culture, the principle of karmic retribution, that is, being held ultimately accountable for one's own actions, is widely accepted. The fundamental teaching of Falun Gong is Truthfulness-Compassion-Forbearance. The universe will reward acts that are in harmony with these principles, while beating, torturing, and killing people will incur karmic retribution. Stated another way, good deeds will be rewarded with good, while doing evil will meet due retribution. Articles such as this one are meant as a compassionate reminder of this principle to those who would commit wrongdoing.]

The suppression of Falun Gong has lasted nearly 23 years in China. Millions of practitioners have been persecuted for their belief in the principles of Truthfulness-Compassion-Forbearance. A total of 16,413 cases of practitioners being arrested or harassed for their faith were reported in 2021 alone.

The persecution has not only targeted innocent practitioners, but has also made the perpetrators victims. Many who blindly followed the persecution policies of the Chinese Communist Party (CCP) have met with dire consequences.

Among them were 155 directors of police departments, including provincial and lower levels. Eighty-four of the cases were reported by Minghui.org, while the remaining 71 were reported by CCP-controlled media in China.

The 155 cases involved 130 police directors put under investigation, 19 who died of various causes, 4 who were sentenced to prison, 1 who was given a disciplinary warning, and another who was struck with a misfortune of other types.

The cases took place in 28 provinces and centrally-controlled municipalities, with Guangdong Province topping the list with 14 cases, followed by Liaoning and Shandong (each 13), Hebei (12), Shanxi (10), and the rest of the regions reporting single-digit cases. 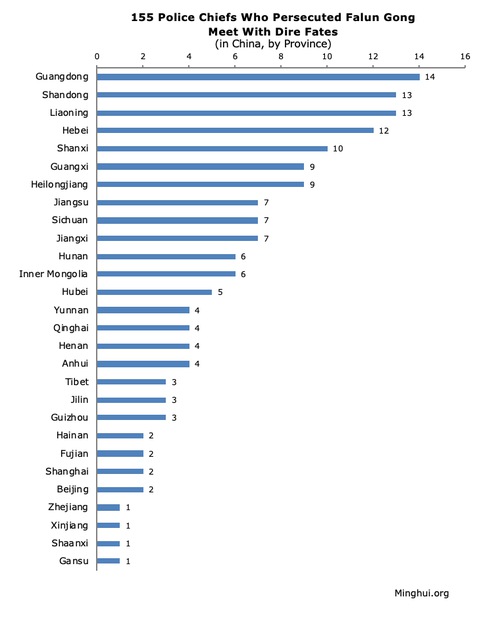 Quite a few police directors died of accidents or illnesses, praised by the CCP as martyrs or exemplary officers in attempts to lure even more people to die for the regime.

A participant of Golden Shield Project

Over the years, Pan had a track record of involvement in the suppression of Falun Gong. For example, in 2000 he was appointed deputy director of the Fujian Public Security Network Security Supervision Office. In 2010, he was promoted to be director of the Science and Technology Communication Office in Fujian Police Department. Throughout those years, he was a key participant in Golden Shield Project, a surveillance network by the CCP. Both Fuzhou City and Sanming City where Pan Dongsheng worked were among the worst areas where Falun Gong practitioners were persecuted.

The surveillance network Pan participated in has become the most important means of persecuting Falun Gong practitioners in recent years. Reports received by Minghui show that more and more practitioners have been arrested or harassed after being recorded by surveillance videos raising awareness of the persecution in public.

The CCP tried its best to cover up the sudden death of Pan. Fujian posthumously awarded Pan Dongsheng the title of “Outstanding Communist Party Member of the Province” and “Official of the Year in Fujian,” and the Central Propaganda Department posthumously awarded Pan Dongsheng “Official of the Times” and was selected as the “Annual Tribute Hero.”

The CCP’s tactics may motivate some greedy people to continue to risk their lives and sacrifice their lives for them, but it cannot change the nature and the outcome of the reward for good and evil. We cannot escape our karma. Medals and garlands cannot save Pan’s life, or cover the blood from the innocent left by him.

Hechi City and Wuzhou City, two places where Kuang had led in the past, are among the worst regions where Falun Gong is suppressed. When Ms. Lu Huibi, a 54-year-old practitioner, went to Mengshan County in March 2017 to distribute Falun Gong materials, plainclothes police officials followed her and later arrested her. She was sentenced to three years and secretly sent to the Guangxi Women’s Prison in September 2018.

After his death, Kuang was honored as an exemplary officer like Ren Changxia, former police chief in Dengfeng City of Henan Province who died in an unusual car accident in 2004 when all other people in the vehicle were fine.

Similar to Pan and Kuang, Liu was awarded by the Public Security Ministry as an exemplary officer.

Wang Xie was deputy mayor of Taihu County, Anhui Province, as well as director and Party secretary of Taihu Police Department. Before his death, Wang was awarded by the Public Security Ministry. Several months after another award from Anhui Province authority, he died at 52 of pancreatic cancer in September 2021.

Wang and other officials were responsible for the suppression of Falun Gong in Taihu County. When Mr. Peng Zhijiang told others about Falun Gong in May 2016, Taihu police arrested and framed him, resulting in three-year prison term against Mr. Peng.

Another police chief honored by the CCP was Li Yingchen, former director of Hehang City Detention Center in Heilongjiang Province. He died in early 2021 shortly after being appointed as deputy police chief of Xing’an Police Substation.

Many reports on Minghui have exposed bad deeds of Li. In particular, he forced many tortures on practitioners, including female practitioners, detained in Hegang Detention Center.

For example, Mr. Tan Yanjun had an extremely poor health due to abuse at Hegang Detention Center in 2004. His illnesses included perforated eardrum, ankylosing spondylitis, osteoarthritis of both hips, tuberculosis, sinus tachycardia, rheumatism, and inability to walk. In addition, his neck, lower back and lower limbs could not move. In the end, Li Yingchen and others dumped Mr. Tan in the alley near his home and left. Mr. Tan’s 65-year-old mother had to drag him for over 100 meters back home.

After crawling inside his home, Mr. Tan told his sister, “I walked out of here on two legs. But because of the persecution from the CCP, now I had to crawl in with both hands.” He could not sit still or lie down due to poor health, and could only lean against the wall. Unable to eat or sleep, he often vomited blood and had difficulty breathing.

All this left Mr. Tan emaciated and his condition deteriorated. At noon on February 27, 2005, Mr. Tan passed away with tears in his eyes as he looked at his underage daughter and son. He was only 40.

Killed by subordinate and labeled as “sacrifice for public service”

According to an announcement from Zhanjiang Police Department of Guangdong Province in February 2021, Xuwen County deputy police chief Wu Zongbo was shot dead by a police station head Xu.

Although Wang was killed by a lower officer, the CCP authorities later covered up this and announced his “sacrifice for public service.” Articles on Minghui have documented the suppression of Falun Gong in Xuwen County. For example, over 10 officers went to the home of Ms. He Cuiqin in March 2018. In addition to ransacking her home and taking away all Falun Gong books, some officers also stayed at place 24/7 to watch her.

Below are cases of police chiefs being investigated for various charges.

News media reported in July 2021 that Li Wenxi, former director of Liaoning Province Public Security Bureau, was removed from his position and indicted for committing a crime.

On October 12, 2021, the Supreme Procuratorate arrested Wang Like for bribery. Wang was Party secretary of Jiangsu PLAC and head of Jiangsu Province Public Security Bureau.

Cheng Weiqing, former director of Zhangjiakou Police Department in Hebei Province, died of brain tumor in October 2021. He was 51 and had a track record of involvement in the suppression of Falun Gong.

After Cheng became the deputy mayor of Zhangjiakou and police chief of Zhangjiakou, 118 Falun Gong practitioners were arrested between 2002 and 2021 alone. Among them, 11 were sentenced, 53 were sent to brainwashing centers. In addition, more than 100 had home ransacked and personal properties taken away, over 200 harassed by officials at home, and many were forced to stay away from home.

Like other officials mentioned above, Zhou was also heavily involved in the persecution of Falun Gong.

In July 2016, he became political head of Kaijiang Police Department. In August 2018, he was promoted to be director as well as Party secretary of Kaijiang Police Department. Since then, many practitioners in the region were framed and arrested. For example, Mr. Deng Daoheng was arrested in 2018 for possessing Falun Gong books and sentenced to 8 years in prison in 2020. Mr. Wu Yingguo was frequently harassed by officials, which led to his death in the end.

Gao Deyi, former deputy Party secretary of Heilongjiang Province Public Security Bureau, drowned in August 2021. Before that, he had actively participated in the persecution of Falun Gong.

During those years, quite a few practitioners lost their lives due to the persecution in these areas. Ms. Lin Guoying fell into a vegetative state and died miserably. Mr. Li Huifeng was imprisoned for 12 years, during which time he was severely tortured including being burned with 100,000-volt electric batons. He died at 48 in January 2020.

According to news on August 3, 2021, Xue Heng, the former vice chairman of the Liaoning Provincial Political Consultative Conference of the Communist Party of China and the former director of the Liaoning Province Public Security Bureau, was investigated for serious violations of discipline and law, and he himself had to so-called voluntarily surrender. During Xue's tenure, he actively implemented the persecution policy of Jiang Zemin's criminal group against Falun Gong.

In the name of “maintaining stability,” Xue had directed the province-wide suppression against Falun Gong practitioners. In particular, he ordered to spy on practitioners followed by massive arrests. During the time when Xue was Liaoning police chief, many practitioners across the province were arrested, detained and tortured. This led to the deaths of at least 29 practitioners.

Chen Junqin was deputy mayor of Meizhou City, director of Meizhou Police Department, and deputy Party secretary of Meizhou PLAC. Before being taken down in October 2021, Chen had led numerous persecution activities against Falun Gong practitioners.

For example, when Chen was in charge of Meizhou Police Department, Meizhou PLAC, and Meizhou 610 Office, many practitioners were arrested and sentenced. They include Ms. Guo Yafen, Ms. Zeng Haiping, Ms. Li Qunzhao, Ms. Li Yixiu, and others. In addition, Chen hosted many campaigns on propaganda against Falun Gong.

Being Sentenced After Persecuting Falun Gong

Some officials who suppressed Falun Gong were also arrested and sentenced. Here are some examples.

Zhao Mingming was deputy police chief in Sanhe City, Hebei Province. After being warned and removed from office in November 2015, he was sentenced to 6.5 years in February 2021 for protecting mafia organizations.

Zhao became deputy director of Sanhe Police Department in March 2005. He was then appointed head of Yanjiao (a district under Sanhe) Police Department between July 2010 and November 2015, during which time, at least 11 practitioners in Sanhe lost their lives, three disabled due to torture, 15 sentenced, 29 sent to labor camps, and 108 sent to brainwashing centers. In addition, there were many cases of harassment, home ransacking, and personal property confiscation. Because of these, Zhao was listed as one of the key perpetrators in the World Organization to Investigate the Persecution of Falun Gong (WOIPFG) with an entry number of E000150250.

Because of protecting the mafia organizations, Sun was sentenced to 7.5 years in February 2021.

On December 20, 2021, Jiangnan Court in Guangxi Province had a trial against Zhong Zhigang, former Mashan County deputy police chief. Zhong was sentenced to 8 years with a fine of 300,000 yuan.

During the time when Zhong was Hequn Police Station director (2006 – 2015) and deputy chief of Mashan Police Department (2012 – 2019), he was one of the key perpetrators responsible for persecuting Falun Gong practitioners.

Above is a collection of the many cases in China where perpetrators met with consequences after persecuting Falun Gong. We sincerely hope more officials can learn from lessons and stop participating in one of the largest human rights violations in the modern society.

“A Terminal Cancer Patient Comes Back to Life”