(Minghui.org) Stern, one of the largest magazines in Germany, published an article on March 16, 2022, exposing the persecution of Falun Gong in China. “Followers of the Falun Gong teachings have been persecuted, arrested, tortured and killed by the Chinese government for the past 20 years. It is estimated that thousands of them have fallen victim to organ harvesting: a ‘large-scale, systematic removal of organs from live people,’ as the US government writes in its annual Report on Human Rights,” wrote the article titled “China: People persecuted, tortured and killed - because they meditate.”

Founded in 1948, Stern is a weekly magazine and has a total readership of about 8 million. 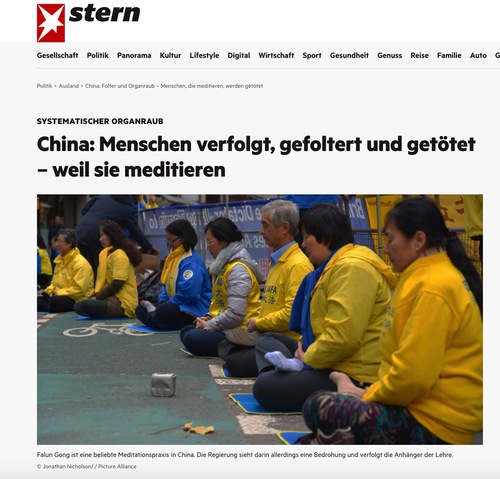 Falun Dafa, also known as Falun Gong, is a meditation practice based on the principles of of Truthfulness-Compassion-Forbearance, the article wrote. “The exercises are designed to improve physical and mental health. Although sounding peaceful and simple, it is severely punished in China,” it explained.

The practice was founded by Mr. Li Hongzhi and was very popular in the 1990s. Millions of people joined the practice of Falun Gong, and the Chinese government saw it as a threat. After several thousand followers organized a silent protest, the CCP classified Falun Gong as a “threat to social and political stability,” according to information from Amnesty International. The movement was then declared a "heretical sect" and banned. “The government then set up a new security agency called the 610 Office to eliminate spiritual practice,” the article continued.

With a picture, the article said Falun Gong exercises consist of meditation and easy-to-learn movements. In fact, practitioners often practice together outdoors to raise awareness to the public and the international human rights organizations.

Even with current Chinese laws, the practice of Falun Gong is legal in China. But the CCP often abuses laws to suppress people at will. According to Coalition to Investigate the Persecution of Falun Gong (CIPFG), practitioners were often “held in detention for months before appearing before a judge.” After a mock trial, most practitioners ended up in prisons or labor camps (or known as “re-education centers”).

Citing information from Minghui, the article said about 6,000 Falun Gong practitioners were arrested in 2019 alone. “The Chinese government's methods have become increasingly violent over time, according to Human Rights Watch,” the article continued.

Cases documented by Amnesty International indicted detained practitioners faced “sleep deprivation, being forced to remain in stressful positions and other forms of physical and mental torture and other ill-treatment.” Citing information from German Falun Dafa Association, the article said over 4,000 practitioners had lost their lives due to torture.

“The organ harvesting from living Falun Gong practitioners is a systematic crime by the Chinese Communist government,” according to information from CIPFG. according to the Coalition to Investigate the Persecution of Falun Gong. Since the onset of the persecution, the country’s organ transplant industry has grown explosively.

“Transplant clinics still advertise that they can procure any organ they need within a few days and that they have several living organs available for each operation,” explained the article.

An investigation by the China Tribunal has confirmed allegations of organ harvesting. With an independent panel of lawyers and experts, the tribunal found organ harvesting has lasted in China for a long time “to a significant extent by state-supported or recognized” activities, the article cited reports from Reuters in 2019.

The Falun Gong practitioners are “probably the primary group for organ harvesting,” explained The Tribunal's President, Sir Geoffrey Nice, adding that “a great many people have died indescribably horrid deaths without cause.”