(Minghui.org) The bright voices of young practitioners echoed through the walls at Minghui School in Chung-Li, Taiwan, as they read Zhuan Falun, the main book of Falun Dafa, during a weekend class recently. 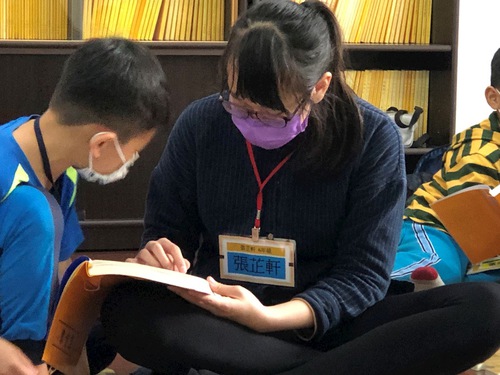 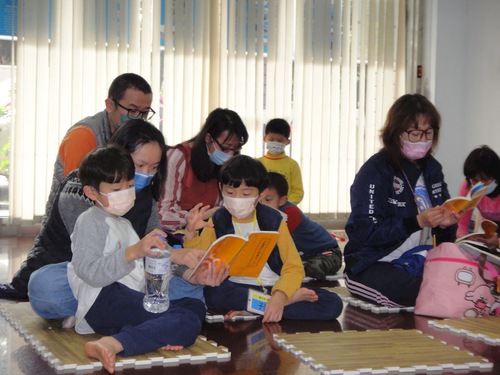 Parents and teachers accompany the children studying the Fa.

Both adults and young practitioners share their cultivation stories, study the Fa and practice the exercises at the school. They encourage each other to be more diligent and steadfast in cultivation by adhering to the principles of Truthfulness-Compassion-Forbearance in their daily lives while being good people.

Ms. Jun Wen, an early childhood educator, said, “The Minghui School curriculum teaches traditional Chinese culture, such as the Three Character Classic. It also is immersed in the principles of Truthfulness-Compassion-Forbearance, and encourages children to look inward to find their own shortcomings. After reading a story together, the children displayed exemplary conduct by enlightening to whether or not the protagonist abided by the Fa principles.

When it was time to share their own cultivation experiences, children began talking about what they’ve encountered in their daily lives and whether or not they have abided by the principles of Truthfulness-Compassion-Forbearance.” 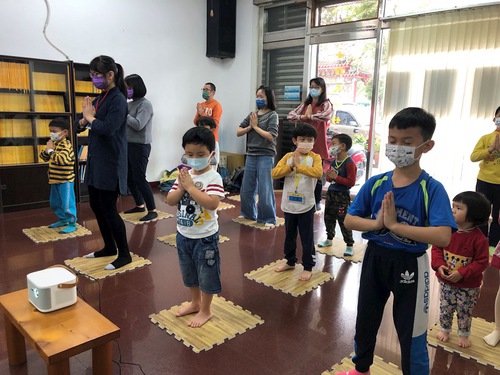 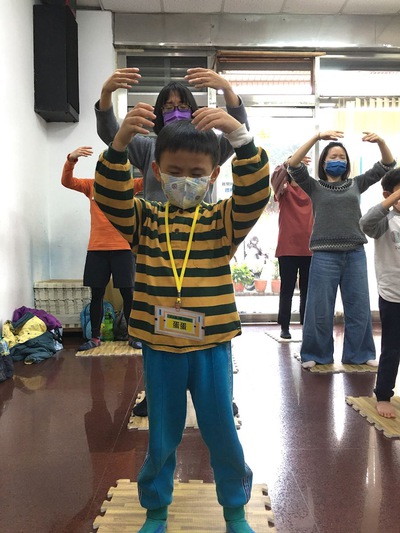 Ms. Jun Wen said the young Dafa disciples were all actively engaged in sharing and having conversations. After reading a story about a young child who was attached to money, the teacher asked, “Do you have any attachments?” A fourth grader said he had the mentality of showing off. Though the teacher reassured him that it could also be regarded as self-esteem, the fourth grader still felt that he was full of pride and contentment that needed to be taken seriously.

Ms. Jun Wen shared the cultivation story of a child named Da Mao. Da Mao would often actively participate in conversations and share his insights about the cultivation stories, and he improved significantly in his cultivation. However, he would still fidget when he studied the Fa and practiced the exercises, and he lacked patience. Da Mao is now able to stand still while practicing the standing exercises.

From listening to many of the famous Chinese classical stories, young Dafa disciples learn more about how to apply the principles of Truthfulness-Compassion-Forbearance in their daily lives and to upgrade their xinxing.

Ms. Yi Zhen, the parent of a five-year-old, said, “We as parents cherish this cultivation opportunity. Despite on the distance and weather, we come to attend Minghui School.”

Ms. Yi Zhen’s son was very mischievous and active. After attending Minghui School, he seemed calmer and was able to study the Fa and practice the exercises with everyone else. Ms. Yi Zhen said that she would sometimes slack off in cultivation at home, so the environment at Minghui School was a good cultivation environment for both the children and parents. Parents are able to share their experiences and encourage each other in cultivation.

Zhi Xuan, a sixth grader, started cultivating Falun Dafa several months ago. She attends Minghui School with her mother and brother every Saturday. She shared that her greatest improvement in cultivation was “upgrading her xinxing.” She used to often quarrel and hit her friends, but she is now able to endure more and not get into conflicts. She has also become more altruistic and thoughtful. After realizing that she was able to consider others first, Zhi Xuan happily said, “Wow! I have improved.” She treasures Minghui School’s cultivation environment.

Ms. Xiang Yin, a parent of twin boys, stated, “I cherish this cultivation environment. Children are able to learn about classical Chinese stories and the meaning and formation of Chinese characters. I think it is very good. My children enjoy attending Minghui School. I hope they can be educated with positive values and align themselves with the characteristics of Truthfulness-Compassion-Forbearance to become better people.” The boys now won’t argue or get into conflicts at school and are often considerate of others.

The faucet broke one time at the school and the water kept running. The children worried about the water being wasted, so they attempted to use their bodies and hands to hold the water back. Though the children got drenched, they did not leave and continued blocking the water flow.

The teachers also noted that the twin boys were now very well-behaved. They were considerate of others during class and do not get into conflicts or arguments. They have indeed assimilated into the principles of Truthfulness-Compassion-Forbearance.

“Reported in Jan/Feb 2022: 782 Falun Gong Practitioners Arrested or Harassed for Their Faith”