(Minghui.org) Falun Dafa practitioners displayed banners to support the over 390 million Chinese people who have withdrawn from the Chinese Communist Party (CCP) and its affiliated organizations. The event was held at the intersection of Bloor and St. George Street in downtown Toronto on March 4, 2022. The banners exposed the regime's brutal persecution of practitioners in China and called for an end to the brutalities. 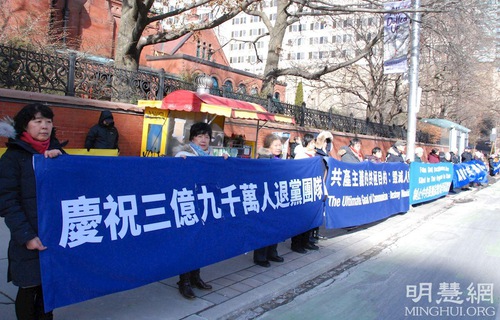 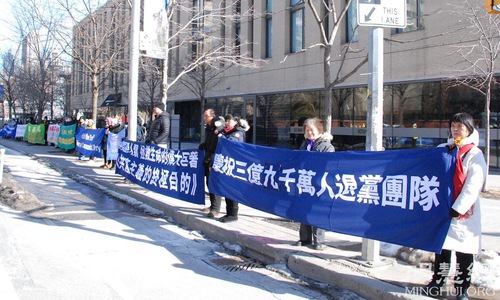 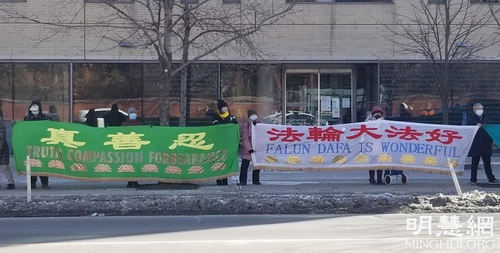 Practitioners in Toronto displayed banners to congratulate the 390 million people who have withdrawn from the CCP and its affiliated organizations. The event was held at the intersection of Bloor and St. George Street in central Toronto on March 4, 2022. 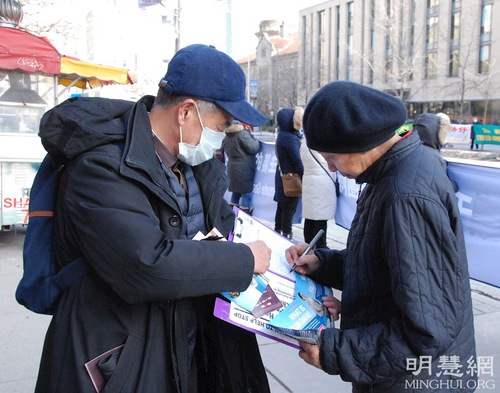 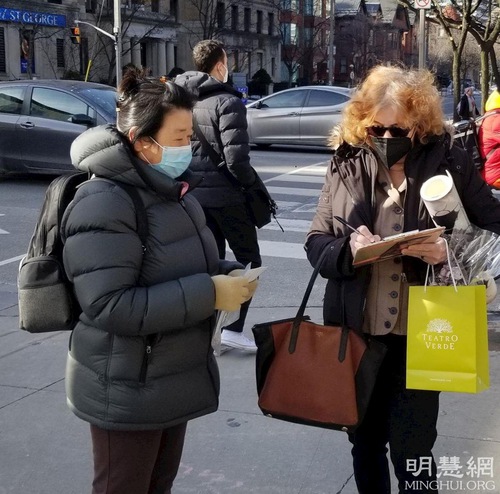 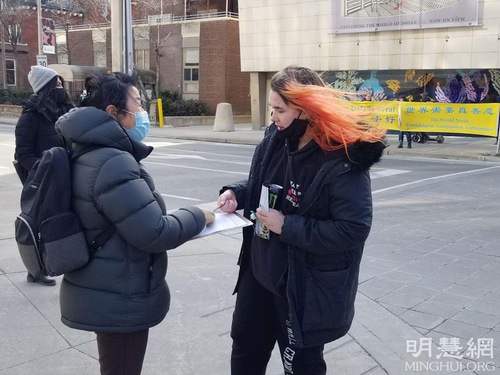 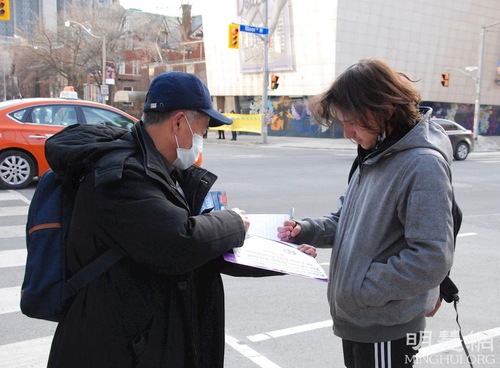 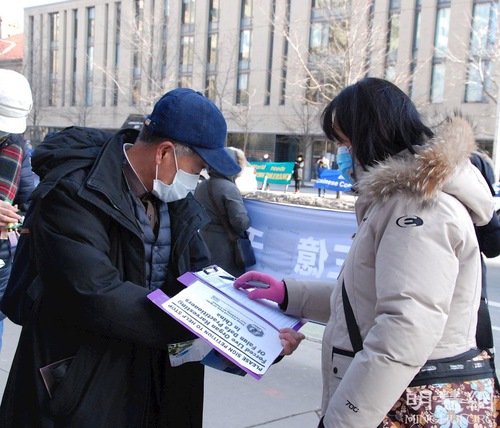 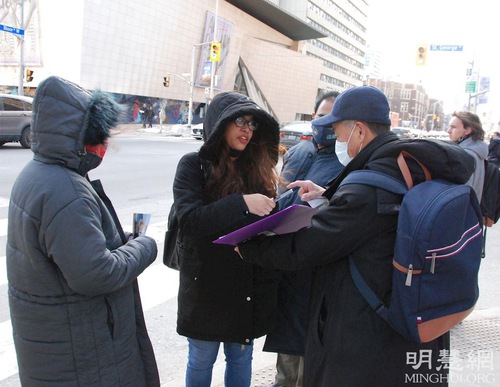 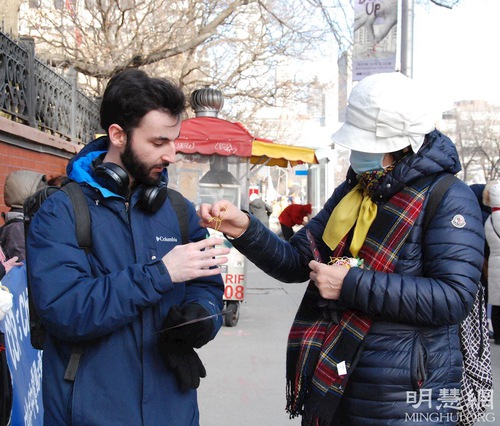 People sign the petition calling for an end to the persecution of Falun Dafa in China.

Ms. Zhang who attended the activity that day is a volunteer at the Toronto Quit the CCP Hotline Center. She said that recently many people who called to quit the CCP did not do so for themselves. Instead they wanted to help their family and friends renounce their membership. When told the person needs to agree to it in order for it to count, they promised to convince their friends and family to make the move. Now, many high ranking officials in China make special trips overseas to look for Falun Dafa practitioners to help them quit the CCP or they phone the hotline number requesting to withdraw from the CCP.

Ms. Zhang shared a story: One day, she called an actor Mr. Lin who worked in a certain performing arts group in Xuzhou City, Jiangsu province. She explained to him the significance of quitting the CCP and how wonderful Falun Dafa is. When he learned about the various crimes against humanity committed by the CCP, he said, “I am not a member of the Party—but I did join the youth league and young pioneers as a child. Please help me quit. Can I trouble you to help my wife and my five brothers to withdraw from the Party too?” Ms. Zhang answered: “You cannot represent anyone in making this decision, it needs their approval.”

Ms. Zhang gave him the phone number for contacting volunteers overseas who help Chinese citizens quit the CCP. He said he would let his brothers know.

I Hope This Persecution Will End Soon 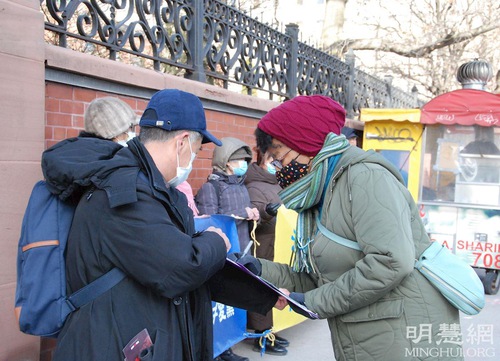 Abolon (right) a Caucasian woman said she hopes the persecution will end soon. Sh signed the petition to call for an end to the atrocities.

Abolon, a Caucasian woman was asked why she wanted to support Falun Gong after she signed the petition to call for an end to the persecution. She paused for a while before replying with tears in her eyes: “I saw them opposing the persecution on the streets since 1999. More than two decades have gone by, yet the persecution continues, this is terrible.” “Something like this should not happen in this world, I truly hope this will end soon, I hope Chinese people will regain their freedom.”

Gavriela, a young Caucasian woman went up to a practitioner holding a banner and stood next to her after reading the message on it. She held a corner of the banner and said to the practitioner: “I am very sorry, I read the message on the banner. I really want to help you, I want to join you and stand together with you. But I have to go to work now, therefore I don't have time now to be with you. Please keep my contact number and keep me informed about further news on Falun Gong.” She waved goodbye after leaving her phone number behind and left.

A middle aged woman from Eastern Europe named Marsha asked a practitioner: “Why is China still under the rule of the Communist Party? This is not the right choice. The CCP is terrible.” She signed the petition.

Immediate Effect After Quitting the CCP

Linda Yang who makes phone calls to China to encourage people to quit the CCP shared a story.

Recently, Linda's 90-year-old father was admitted to the hospital for surgery to remove a gallstone. He recovered within hours after the operation. When Linda went to visit him, she saw a young man in the same room who had just undergone surgery to remove a kidney stone.

Linda's father recovered very well and did not have major issues after the operation. In contrast, she kept hearing groans from the other bed and sighs of despair. She asked his caretaker and was told he was suffering from the side effects of anesthesia. He could not move his neck and felt extremely uncomfortable, but he was awake.

She told his caregiver, “Look at my father. He is 90 years old and is fine after the operation. He is truly fit.” Linda told him, “Mister, let me tell you a way to help you feel better. Do you want to give it a try?” He immediately said, “What is it?” Linda told him about Falun Dafa and helped him quit the CCP. She also taught him to recite “Falun Dafa is good, Truthfulness, Compassion, Forbearance is good.” She said, “Just then, I discovered that he could move his neck and it was not that hard for him to talk. His roommate also observed the change. It was as if he was fine, but just lying in bed. He left the hospital and went home that night.

The Quit the CCP Movement Is Unstoppable 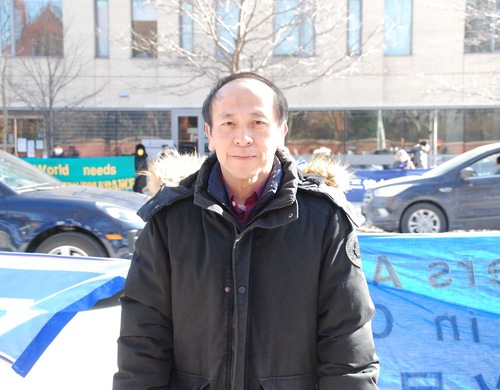 Event organizer Liu Ximing hopes more people can learn about the persecution and have a wonderful future by taking a stance against the CCP.

Mr. Liu Ximing who organized the event that day said that the purpose of the activity was to celebrate the 390 million people who’ve withdrawn from the CCP. At the same time, he hopes to awaken people's inner kindness through the messages displayed on the banners.

“The Quit the CCP movement has lasted for 18 years, now the number of withdrawals has reached 390 million, it is predicted that more and more people will quit the CCP in the future. Because unlike 20 years ago, no matter how hard the CCP tries to cover up the truth, it will spread, especially among Chinese citizens living overseas, they have more opportunities to learn the truth now.” 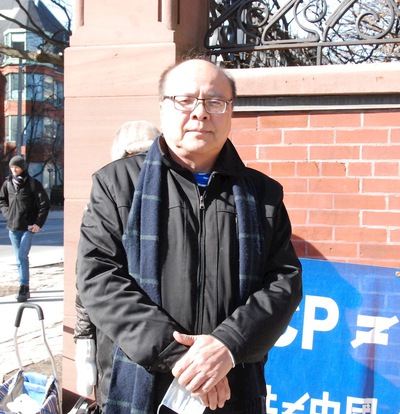 Wang Gongshi, spokesperson for the Quit the CCP center in Canada.

According to Mr. Wang Gongshi, spokesperson for the Canada Quit the CCP center, “An individual may find it hard to stop the CCP’s crimes, however, everyone has the chance to break free from the regime's murky influence by joining the quit the CCP movement and withdrawing from its system. We send best wishes to the more than 390 million Chinese citizens who have withdrawn from the CCP. They truly are the heroes of China.”