(Minghui.org) Today's news from China includes incidents of persecution that took place in 17 cities or counties in 8 provinces, where at least 41 practitioners were recently persecuted for their belief. 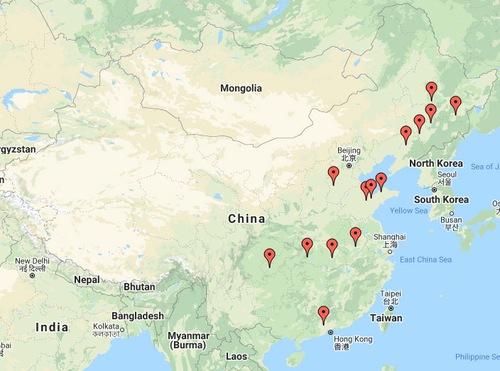 It was learned that the the sentence against Mr. Chen Mingxi was to be announced by the Jiangbei District Court in the No. 2 Court, 2nd floor in the court building, at 9:30 a.m. on February 18, 2022.

Ms. Jiang Guangxue was subjected to house arrest in September 2021. Soon after that, she was ordered to write three statements renouncing Falun Gong. Her case is now in the Shushan District Procuratorate. Sanlijie Police Station director Xu and officer Qian have repeatedly harassed practitioners and their families at their homes or through phone calls.

A virtual trial will be held against Mr. Du Zhentian at 2:00 p.m. on February 18, 2022. His defense attorney received the notification from the Longkou Court.

Ms. Liu Gangli was sentenced to four years and six months in prison by the Development Zone Court. Her appeal was denied last October. She is still being held in the Shenyang City No. 1 Detention Center. Her attorney is not allowed to meet with her.

Mr. Yan Yutao was taken to a brainwashing center on November 15, 2021, and later transferred to the Yichang City No. 1 Detention Center. It was said that he went on a hunger strike to protest his incarceration before he was released on bail.

Ms. Wang Xiangli of Linqu County has been incarcerated in the Changzhou Women’s Prison for almost two years for practicing Falun Gong. She recently talked to her family on the phone for several minutes. They are worried because she sounded very weak and tired.

Zhu Yaqiong (gender unknown) was arrested for carrying Falun Gong books while waiting to board a commuter train for work around 4:00 p.m. on February 14, 2022. Zhu is being held in the Railroad Police Department. Officers ransacked the home of Zhu’s mother on the morning of February 15, and seized 30 copies of Falun Gong pamphlets. Zhu’s family went to the police department but officers refused to talk to them.

More than ten officers from the Bin County Police Department and the Chang’an Town Police Station illegally entered the home of Mr. Liu Zhongmin on February 10, 2022. Mr. Liu escaped. The officers threatened his wife, Guo Yazhen, and forced her to press her fingerprints on a fabricated report. They ransacked the place for more than three hours, and seized his notebook computer, printers, multiple Falun Gong books, and a picture of the founder of Falun Gong.

The officers went to the homes of Ms. Cao Fengzhen and Ms. Min Xiufang. Ms. Min was not at home. Her son led the officers to another practitioner’s home where she was visiting. They took her home, tried to force her to renounce Falun Gong, and seized a picture of the founder of Falun Gong and two desk calendars which contained information about Falun Gong.

Ms. Wang Zujing of Chang’an Town was harassed at home after 7:00 p.m. in April 2021 by Wangjiatun Village leader Zheng Fengguo, officers from the town police station, and agents from the town government. The five people threatened to arrest her if she hung Falun Gong banners outside or posted Falun Gong flyers.

Ms. Wang Jinghui was arrested on February 7, 2022, and held in the Beiling Police Station. She was repeatedly taken to a detention center but was not admitted because of the pandemic.

She was transferred to a quarantine center in the Shenbei area on the afternoon of February 13. She will be taken to a Shenyang City detention center 14 days later.

Ms. Wen, in her 80s, a retiree of Jingxing County 6410 Factory, and Ms. Li of Weizhou Town were arrested by Weizhou Police Station officers on February 9, 2022, after someone reported them for talking to people about the persecution of Falun Gong in the Weizhou Open Market. They were handcuffed and held in a dark room in the police station the entire afternoon. They were not offered food or water. The officers took their blood samples and fingerprints. They were taken to the mining area criminal police brigade for interrogation before they were video-recorded and released.

Ms. Pu Xingchi, around 45, graduated from the Art Department of the former Hebei Normal University. She is an art teacher. She was arrested on January 23, 2022, possibly by officers from the Hongqidajie Police Station in her jurisdiction.

Ms. Li Yinhuan was arrested by officers from the Changxing Police Station on January 26, 2022. She is being held at the Tianhe District Detention Center.

Ms. Yu Meixia was arrested and taken to the Chendong Police Station on the evening of February 4, 2022, after someone reported her when she talked to people about the persecution of Falun Gong. She has been held in the Changyi Detention Center since February 5.

Mr. Meng Qingcai of Yongji County was arrested at home by Wanchang Town government agents and Wanchang Town Police Station officers, including Huang Qiang and Li Zhong, after 2:00 p.m. on February 11, 2022. They ransacked his home and took him to Jilin City. Because his blood pressure was over 200 the detention center refused to admit him.

Soon after he was arrested a group of Wangchang Town Police Station officers went to his home and ransacked the place again. They did not find anything they wanted.

Ms. Zhou Ailin is a retiree of the Qiaokou District Market Supervision Authority. She was subjected to administrative detention by Qiaokou District Domestic Security Division officers for talking to people about the persecution of Falun Gong on Hanzheng Street in July 2021. After she finished the detention term on September 29, 2021, the officers held her in the Etouwan Brainwashing Center and threatened to hold her in another place if she did not renounce Falun Gong.

She was incarcerated even during Chinese New Year when families reunite and celebrate the holiday season.

Mr. Yang Chunman, Ms. Cao Yuqin, 66, and Ms. Liu Shufang, 77, were arrested at around 10:30 a.m. on February 14, 2022. Yongji County 610 Office director Zhang Bo led several officers from the Kouqian Town South Police Station to Mr. Yang’s home. They started to video-record as soon as they entered. When they saw that Ms. Cao and Ms. Liu were there, they called for more police. A group of officers came, ransacked the place, and took the three practitioners to the police station.

Ms. Cao and Ms. Liu were video-recorded and questioned separately. The officers extorted 1,000 yuan from Ms. Cao and released her on bail after 10:00 p.m. Ms. Liu has no income. Her daughter did not comply and pay the police the extortion money. They took all of Ms. Liu’s cash, more than 200 yuan, from her bag and released her on bail. The officers ransacked all three practitioners’ homes and seized their Falun Gong books and other personal belongings. Mr. Yang’s situation is unknown.

Mr. Yue Nailiang, 63, was arrested at his mother’s home in the Fengman District by Huasan Police Station officers and Jianhua Village security personnel after 10:00 a.m. on February 14, 2022. The officers slapped him across the face and beat him in front of his 83-year-old mother. They seized personal belongings from the place. Mr. Yue has been his mother’s caregiver. Police arrested him and left his terrified mother unattended.

A female practitioner who was visiting the family was also arrested.

Ms. Zhang Chengqiong, 78, was arrested by three officers from the Zhendong Police Station on August 17, 2021, after someone reported her for talking to people about the persecution of Falun Gong. The officers ransacked her home, questioned her in the police station, and held her for one day. After they extorted 3,000 yuan from her, she was released on bail.

She got a call from a clerk in her community on November 9. The clerk told her to work on the case cancellation paperwork in the office. When she went there she found that it was fabricated. They tried to force her to sign statements renouncing Falun Gong, defame the founder of Falun Gong, and guarantee she would no longer practice Falun Gong.

She was tried by the Kaizhou District Court on December 14. The verdict is not yet available.

Ms. Zhou Yijun was arrested by a police officer from her community, Liu Junjie, at around 9:00 p.m. on February 16, 2022. Her situation is unknown.

Ms. Dongye Guanglan, in her 70s, was arrested about two months ago, and her home was ransacked. She has been held in the Mudanjiang Detention Center. She was admitted to the Mudanjiang Police Hospital because she has diabetes and urinary incontinence. Police claimed that she was arrested due to the case against her last year. She was detained for 15 days in 2020 for talking to people about the persecution of Falun Gong.

Wang Ling, 44, gender unknown, from Dongfeng County, was arrested for distributing Falun Gong flyers in the Gong’an Community on the evening of February 6, 2022. Police ransacked Wang’s home, and seized Falun Gong books, Falun Gong materials, and supplies to make the materials. Wang was beaten, handcuffed, and suspended by handcuffed wrists by Dongfeng County officers. Wang has been held in the Liaoyuan City Detention Center since February 8.

When the families of Ms. Jin Huixin and Ms. Tai Zhenzi went to deposit money for them at the Yanji City Detention Center, they were told that the two 78-year-old women had been taken to the Jilin Province Women's Prison on January 17, 2022 to serve time. Ms. Jin and Ms. Tai were arrested in September 2020 for distributing calendars which contained information about Falun Gong. They were each sentenced to six months on December 6, 2021.

Ms. Yang Haixia and Ms. Li Shuchun were arrested on February 5, 2020 for putting up banners about Falun Gong. Ms. Yang was sentenced to seven years by the Ranghulu District Court on July 23, 2021. Ms. Li was given five years. Ms. Yang appealed with the Daqing City Intermediate Court, which ruled to uphold her original verdict in mid-September 2021. Both Ms. Yang and Ms. Li were taken to the Heilongjiang Province Women’s Prison on January 7, 2022.

Four Muleng City, Heilongjiang Province residents were sentenced to prison on July 20, 2021 for their faith in Falun Gong. Ms. Gao Yongli was sentenced to six years and ten months. Her brother Mr. Gao Pengguang and Mr. Sun Shiwei were each given six and a half years and fined 10,000 yuan. The fourth practitioner Ms. Shi Ying was sentenced to one year and three months, with a 3,000-yuan fine.

Ms. Gao appealed the verdict, but her appeal was rejected by the Mudanjiang City Intermediate Court. She was taken to the Heilongjiang Province Women’s Prison on January 7, 2022. Meanwhile, Mr. Gao has been taken to Hulan Prison and Mr. Sun to the Tailai Prison. Ms. Shi was released after serving the term.

“Elderly Woman Released from Prison, Son Ordered to Take Leave of Absence to Monitor Her at Home”