(Minghui.org) Upon the grand occasion of the 2022 lunar New Year, supporters of Falun Dafa are wishing Master Li Hongzhi, the founder of the practice, a Happy New Year.

Although these people don’t practice Dafa themselves, they express their deep gratitude to Master Li for spreading the practice to the world and bringing hope. Especially during such a difficult time as the pandemic, they said that reciting the auspicious phrases “Falun Dafa is good; Truthfulness-Compassion-Forbearance is good” helps them to calm down and feel assured that they are protected.

Among the supporters, some are of the younger generation whose parents practice Dafa and some are elderly women in their 80s who credit Dafa for giving them good health. There are also police officers, prosecutors and judges who now support Dafa after understanding the facts. 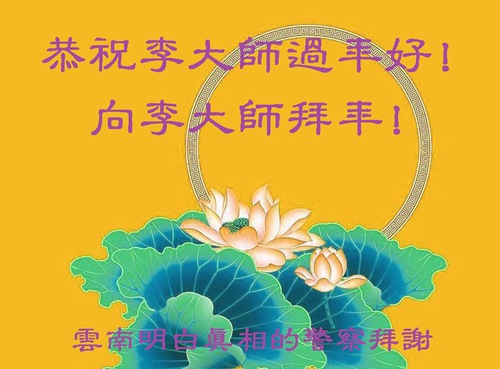 Greeting card from a police officer in Yunnan Province

A former police officer in Heilongjiang Province wrote that after he retired, he was framed by his colleagues and was wrongfully sentenced. He supports Dafa and often recites “Falun Dafa is good; Truthfulness, Compassion, Forbearance is good.” Once, he fell into critical condition, and by reciting the phrases repeatedly, he was resuscitated and soon recovered.

“Without the salvation from Dafa, it would have been very difficult for me to endure one day in the darkness of the prison. During the holidays, I always hinted to my family to send in greetings on my behalf to thank Master Li for taking care of me! I’m longing for the day when I’m released and I will formally start to practice Dafa. As far as I know, there are some people who quietly practice Dafa in the prison.”

A dentist in Jingzhou County, Hunan Province, said, “When I was still in the military in my younger years, I heard about the Tiananmen Massacre of the students. I also know how badly the communist regime is censoring information. When the persecution of Falun Dafa started in 1999, the hospital I worked for demanded every employee to denounce it. I never paid attention to the news about Falun Dafa since then, thinking it would be eradicated in three months [Editor’s note: The CCP claimed that it would eradicate Falun Dafa in three months]. I was in great surprise when I saw a DVD on my desk years later. The DVD contained the book Nine Commentaries on the Communist Party and software to break through the internet censorship. I felt so fortunate to be given access to unfiltered information. My mind became purified. I hope that every Chinese can distance themselves from the Communist Party, uphold the kindness in their hearts and choose a bright future for themselves!”

Another supporter in Harbin City, Heilongjiang Province, wrote, “With the pandemic raging in the world and so many disasters one after another, people are all scared and worried. But as for our family, we feel safe and protected. We know that by upholding kindness and reciting the nine true words ‘Falun Dafa is good; Truthfulness, Compassion, Forbearance is good,’ we will be blessed and live through the disasters.”

In their greeting, a mother and son in Loudi City, Hunan Province, said, “Many Falun Dafa practitioners have clarified the facts to us. We also read many Dafa materials. We understand that Dafa is really great. The communist regime is just evil and is corrupt to the core. All the things that were mentioned in Nine Commentaries on the Communist Party are true and we’ve witnessed it ourselves.”

A family in Shuangfeng County, Hunan Province, said, “We have all read informational materials about Dafa. We know how much propaganda the communist regime has put out to demonize Dafa. We know of several Dafa practitioners in our daily life. Every single one of them is very righteous and kind. We also want to thank Master Li for his blessings, as my son was admitted to the best high school in town.”

A husband in Siping City, Jilin Province, said, “I’m 80 years old now. My wife practices Dafa. I often read and listen to Dafa teachings. I feel that Dafa is the most righteous and the best. Master Li is great! I support my wife very much and I often go out with her to distribute Dafa truth-clarification materials.”

An 86-year-old woman in Yueyang City, Hunan Province, said, “My sister, who is ten years younger than me, has practiced Dafa for over 20 years. She often told us stories about Dafa. We all witnessed the health benefits she has had. She used to have all kinds of ailments and had to wear a hat even in the summer. Now she is very healthy and she can still do needlework without wearing glasses.

“In early December 2021, I accidentally fell in my sister’s home and broke my coccyx. I had pain all over. My sister played Dafa’s Master’s teaching for me and I immediately felt that the pain was alleviated. A few days later, my son took me home. The pain kept me awake at night and I lost quite a lot of weight in two days. My son had to take me back to my sister, who played Master’s teachings to me again. I soon recovered.

“My children were all impressed by Dafa’s healing power, especially my daughter-in-law. She works for the residential committee and had a hostile attitude toward Dafa. She now also expressed interest in learning the Dafa exercises.”

Another 83-year-old woman in Santai County, Sichuan Province, said, “I have received many blessings for supporting Dafa. Thanks to Master Li, my health has gotten even better over the years.”

The son of a practitioner in Zhengzhou City, Henan Province, wrote, “My mother used to have liver cancer, which was cured by practicing Dafa. In the past 23 years, she has remained healthy and never has to take any medicine again. Dafa saved my mother and gave me a complete, warm family. I’m full of gratitude for Dafa and Master Li!”

The daughter of a practitioner in Baoding City, Hebei Province, said, “Although I don’t practice Dafa myself, during those darkest times, I’ve tried my best to protect my mother. Many miracles happened. I know Dafa is the most righteous and it can purify one’s heart. It’s the only pure land in the world. I know Master has also been protecting me and giving me the ability to stop the police from persecuting my mother.”

Another Beijing resident whose parents practice Dafa said, “During the height of the persecution, my parents were repeatedly targeted. My mother was given two years of forced labor. I was only 18 back then. Every day felt like a year to me. New Year was always the most difficult time for me. But no matter how much our family suffered, I know my parents didn’t do anything wrong and it’s the communist regime that is too evil. I’m longing for it to be eliminated. Thank you, Master Li, for protecting and helping me through that most difficult time!”

Yet one more Beijing resident wrote, “My mother practices Dafa. She used to have a bad temper, but now she is like a different person. She is a living example of the beauty of Dafa. Now my mother is in her 70s. She still enjoys good health and can help me take care of my child. I know it’s all the blessings that Dafa has given to our family.”

The parents of a practitioner in Huludao City, Liaoning Province, said, “It’s so fortunate for us to be born during the time that Dafa is spreading in the world. We’ve understood the facts of Dafa. Our bodies and minds were purified. Although we have yet to formally take up Dafa practice, we are living every day following Dafa’s principles of Truthfulness, Compassion, Forbearance.”

Other greetings hailed from the following supporters: 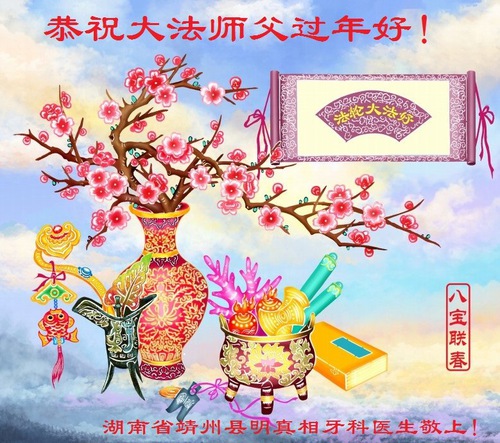 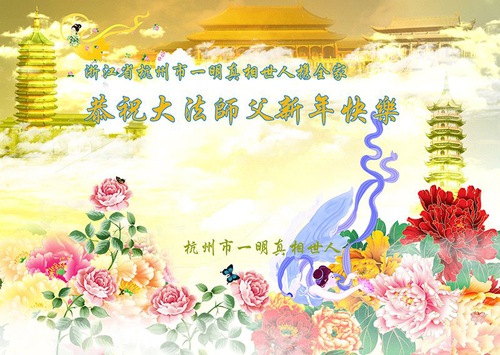 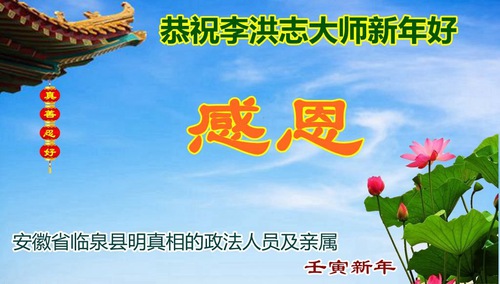 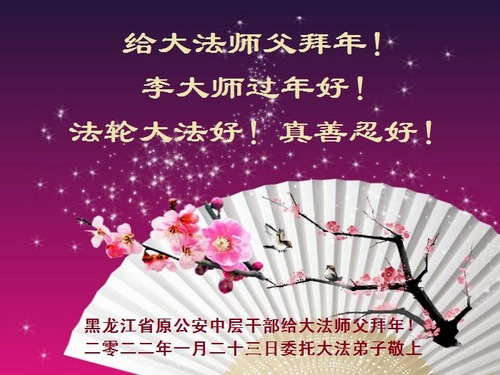 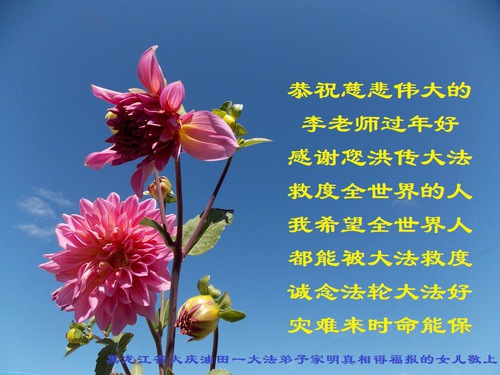 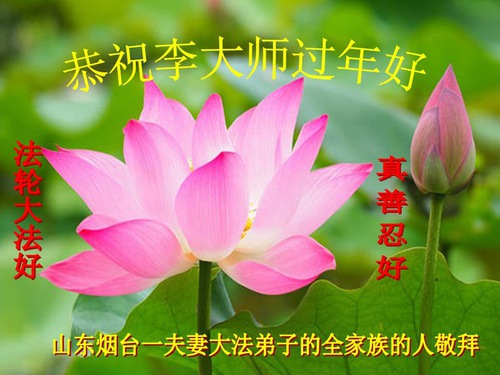 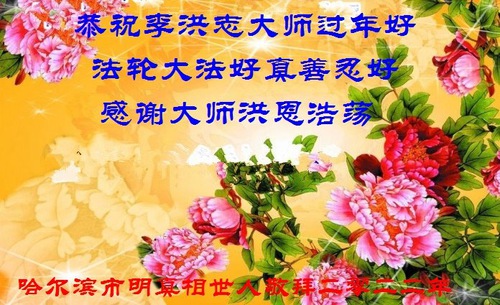 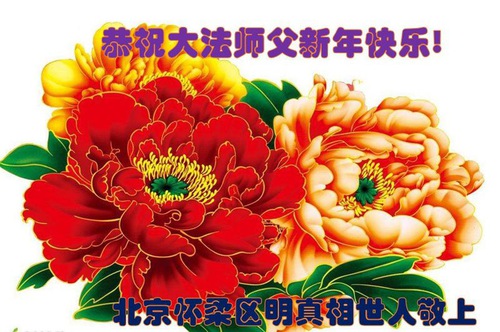 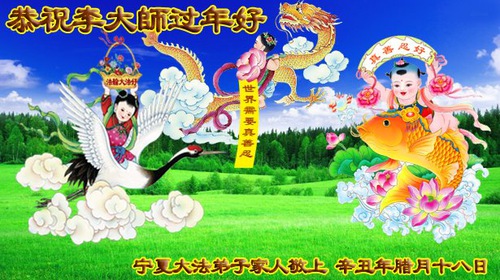 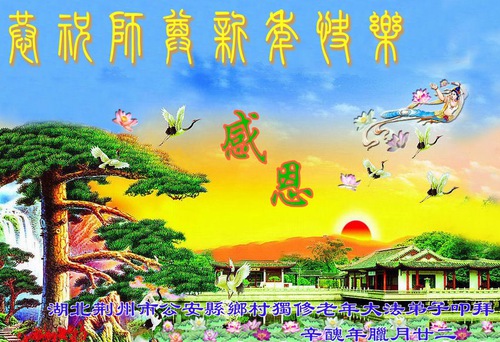 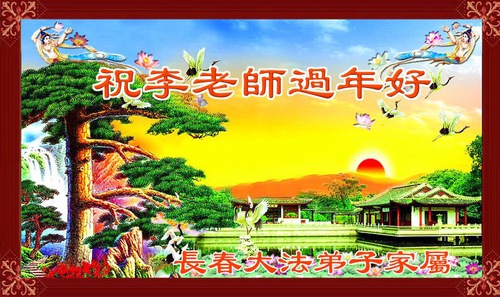 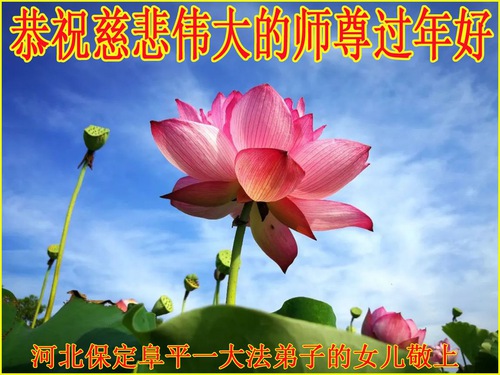 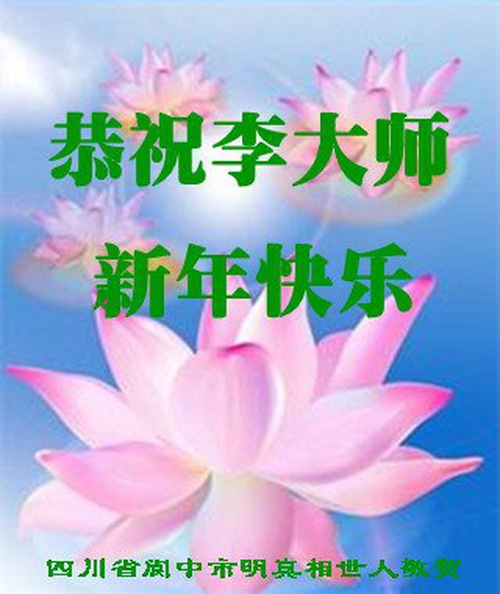 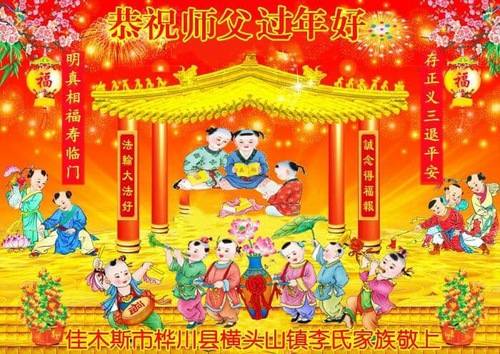