(Minghui.org) Today's news from China includes incidents of persecution that took place in 8 cities or counties in 5 provinces, where at least 12 practitioners were recently persecuted for their belief. 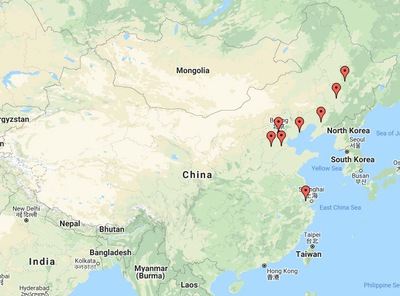 Ms. Yu Lanfang, 55, is from Weifang City, Shandong Province. It was learned on February 8, 2022, that her case was submitted to the Wujiang District Court, Suzhou City.

Ms. Jing Fengmei’s case was submitted to the Chaoyang District Court on February 7, 2022.

Wang Yuan (gender unknown) was arrested by officers from the Changda Police Station on the afternoon of January 24, 2022, after someone reported Wang for distributing Falun Gong pamphlets in residential buildings. Wang’s home was ransacked and he or she is being held at the Yuemingshan Detention Center.

Mr. Peng Jingjun was arrested by officers from the Chengqu Police Department on the afternoon of February 8, 2022.

He was previously arrested on August 19, 2020, for talking to people about the persecution of Falun Gong. The case was submitted to the procuratorate and court numerous times. He left home to avoid further persecution in December 2020. His parents, in their 80s, are living there. Officers have repeatedly ransacked the place.

Ms. Mu Ruiqiu was harassed at home on the afternoon of January 25, 2022. Two Dongjie Police Station officers, led by their director Zhang, claimed they were checking electrical safety. They seized her Falun Gong books and a picture of the founder of Falun Gong.

Mr. Zhao Shaokuan is under illegal 24-hour surveillance conducted by the Liujie Community Residential Committee, Changping District. Security guards hired by the committee follow him whenever he leaves home.

Ms. Wang Guilan was arrested at home on the afternoon of December 8, 2021, by Sanhe Police Station officers, led by Li Kun. The officers grabbed her husband’s cell phone, checked through its messages, and illegally videotaped inside her home.

She was interrogated in the Shuangyang District Criminal Police Brigade and taken to a detention center. Guards did not admit her because she failed the physical exam. She was released.

Mr. Hou Dongliang was arrested around 11:00 p.m on January 11, 2022, by over 10 officers from the Jindao Police Station, led by director Guo Zengwei. The officers ransacked his home and seized a picture of the founder of Falun Gong.

The officers handcuffed him to a tiger bench for a night and a day in the police station. He did not comply during the interrogation. He was released around 5:00 p.m. on January 12.

Ms. Wang Shumei and Mr. Su Hongxin were arrested the same night by Guo Zengwei and others. They were released the next day.

Zhang Yanbo (gender unknown) and Ms. Yang Yazhi were each harassed at home by the director of the Handian Police Station and two officers on the evening of February 4, 2022. The officers seized their lotus lanterns, tore down their couplets, and new year drawings. Lanterns, couplets, and drawings are traditional Chinese New Year decorations and contain words expressing the owners’ good wishes for the coming year. Practitioners frequently use words inspired by Falun Gong.