(Minghui.org) Omicron, the latest variant of COVID-19, has spread to at least 155 countries as of January 2022. The first omicron case was detected in Beijing, China, on January 15, weeks before the Winter Olympics was set to take place. A few other places such as Zhejiang, Henan, Guangdong, and Tianjin, had also reported Omicron cases.

The risk of reinfection with Omicron is at least five times greater than the Delta variant, according to a study conducted at Imperial College London. The U.K. authorities warned in December that the Omicron variant is “the most significant threat” to public health. The French Minister warned on December 18 that the variant was “spreading at lightning speed” in Europe and would likely dominate France very soon.

Omicron cases in the United States, Canada, Ireland, and other areas also rose sharply. Anthony Fauci, director of the National Institute of Allergy and Infectious Diseases and the Chief Medical Advisor to the U.S. President, said on December 12 that Omicron could evade the protection that existing vaccines gave.

This is in line with a report published on July 30 by the Scientific Advisory Group for Emergencies (SAGE) for the United Kingdom government. Titled “Long term evolution of SARS-CoV-2”, the report wrote, “As eradication of SARS-CoV-2 will be unlikely, we have high confidence in stating that there will always be variants,” adding it is “almost certain” that a variant could emerge that “leads to current vaccine failure.”

Such a prediction unfortunately matches the pattern we have observed in the past two years. From its early onset in Wuhan in December 2019 to the Alpha variant in the U.K. in later 2020, from the Delta variant in India to the Omicron variant in South Africa, there was usually a “calm” period that seemed to give us confidence in our ability to fend off the disease, but every time, it was followed by a new variant to trigger a new wave of worries and uncertainty.

How Effective Is Vaccination? 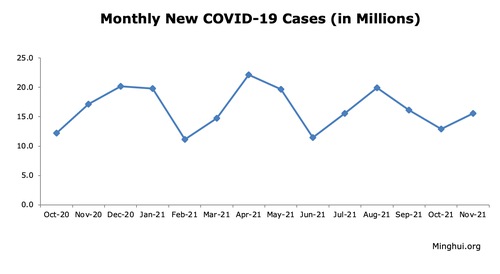 Above is a graph that depicts monthly new cases between October 2020 and November 2021 based on real-time data from Worldometers and John Hopkins University. The first approved Covid-19 vaccine became available in December 2020, and more and more people have been vaccinated since then. However, the graph indicates that there is still a lot of variability concerning new cases, which casts doubts on the effectiveness of the vaccines.

According to a report from Reuters, it took over a year for the coronavirus to take the lives of 2.5 million people, but the time was shortened to less than 8 months for the next 2.5 million deaths. With a total death of 5.7 million as of now, the current measures did not effectively curb the pandemic.

At the beginning of the pandemic, new cases were often attributed to the population who had not been vaccinated. But research from Harvard published in the European Journal of Epidemiology in September 2021 challenged this. The research was titled, “Increases in COVID-19 are unrelated to levels of vaccination across 68 countries and 2947 counties in the United States.”

“At the country-level, there appears to be no discernible relationship between the percentage of the population fully vaccinated and new COVID-19 cases in the last 7 days,” the authors wrote, “In fact, the trend line suggests a marginally positive association such that countries with a higher percentage of the population fully vaccinated have higher COVID-19 cases per 1 million people.”

From the early panic over the pandemic’s arrival to the wide acceptance of vaccines to their limited effect on curbing the omicron variant, the harsh reality suggests we may need to continue searching for alternatives to fend off the pandemic.

Plagues came and went many times in history. Some examples included the Plague of Athens (430 BC), the Black Death in the 14th century, and Spanish flu during World War I. Almost every time, the pandemic came suddenly and disappeared mysteriously.

But there were also miracles. When a plague-infested Wittenberg in 1527, Martin Luther decided to stay and take care of the sick and dying. He believed that those who helped patients with virtue, devotion, and sincerity would be protected. In the end, he was able to survive the plague.

Another example was the village of Oberammergau in Bavaria, Germany. When a plague hit the region in 1633, half of the villagers died. The remaining residents vowed to perform a play of Jesus’s life and death every 10 years if God protected them from the plague. No one else in the village died of the plague after that, and the tradition of doing the play has continued to this day.

Those Who Help the Sick Are Blessed

Traditional Chinese culture has always believed in the harmony of heaven, earth, and mankind. More specifically, if one values virtue and worships the divine, he would be blessed with good health, a happy family, and a peaceful society. Otherwise, problems would arise.

Plague, for example, is one type of trouble caused by the lack of virtue and lack of respect for the divine. He Xiu, a Confucian scholar in the Han Dynasty, once wrote, “When people are infested with illness or plague, it is caused by vicious factors.”

Stories like Luther were also recorded in Chinese history. According to Siku Quanshu (Complete Library in Four Sections), an official surnamed Xu in the Ming Dynasty from Gaozhou (in today’s Guangdong Province), saw both his grandmother and stepmother dying from dysentery. Many of their family members were also infected. While their neighbors and relatives ran away one after another to avoid infection, Xu decided to stay put and take care of the two ill women. Not only was he totally fine, he was also able to help his grandmother and stepmother to recover. It was as if the plague had nothing to do with him.

A similar situation happened to Zhang Yanchen in the Ming Dynasty. When one family nearby had everyone infected by a plague, their relatives and neighbor stayed away for their own safety. Zhang cooked food for the ill and visited them several times a day. When others tried to stop him, Zhang replied, “When a person is doing a good deed, he would be blessed instead of getting infected with plague. Even trees on the roadside could provide shade helping people, how can we people not take care of one another?” Although he was interacting with the patients closely, Zhang was healthy all along.

What we learned in history could also help us deal with our challenges today. French prophet Nostradamus predicted in Centuries that a major disaster would break out in 2021 with a large number of deaths. Liu Bowen, a sage in the Ming Dynasty, also predicted a plague would happen in late 2019.

But there are also solutions. When describing the plague in Taibai Mountain Monument Inscription, Liu wrote, “...compassion in heart is the only safety.” That is consistent with the incidents described above, both those in ancient Chinese and Western society.

Miracles also occurred in the modern-day pandemic. Falun Dafa, also known as Falun Gong, is a meditation system based on the principles of Truthfulness-Compassion-Forbearance. Because its teachings are aligned with traditional values, the Chinese Communist Party (CCP) has been persecuting the group since 1999, causing tens of millions of practitioners and their families to suffer endlessly in the past 23 years.

Many accounts received by Minghui have shown that, when people support innocent practitioners and reject the CCP regime, they would receive blessings. In fact, by keeping in mind “Falun Dafa is good” and “Truthfulness-Compassion-Forbearance is good,” many people have regained health, including recovering from coronavirus infection.

There are always many uncertainties in life, but following our conscience and remaining good-natured will always bring blessings, for you, for me, and for our society.