(Minghui.org) Liu Bowen, a renowned sage from the Ming Dynasty, once described a prophecy in his Taibai Mountain Monument Inscription.

Due to its relevance to the current coronavirus pandemic, several previous Minghui articles have mentioned excerpts of the prophecy such as “Plague Predicted in the Ming Dynasty by Liu Bowen,” “Wuhan Coronavirus Epidemic’s Connection with Ancient Prophecies,” and “Disasters that Foreshadowed the Demise of Ancient Dynasties.”

To help readers understand the prophecy, we present the English translation of the entire piece. Based on the content, it can be divided into three parts: the first discusses an emerging plague, the second includes a detailed description of the ensuing calamity, and the third is the resolution of the plague and a prediction for the post-plague era.

Unlike most other prophecies that have been passed down for centuries, this particular prophecy was not discovered until a little over 30 years ago, during an earthquake. Located in Mount Taibai of Shaanxi Province, the text had been engraved in a stone slab and preserved for nearly 700 years.

Heaven has eyes, Earth has eyes,And all possess a pair of eyes;Heaven shall shift, Earth shall sway,Yet carefree is a happy life.Of ten thousand poor, but a thousand to live; Of ten thousand rich, two or three to survive. For rags or riches, all must repent Lest they wish their death-days quickly arrive.Low-laid fields lie barren of grain;In four directions, nary a life. Should you inquire of when this bane flares–September, October shall enter the blight.iIts conclusion reveals to kindly hearts, While those more sinister will never see. In an age when good and gospel convey,iiA salvation missed is a true pity.

The path before us carries ten concerns–Society first falls, chaos rises and reigns,Bringing famine, hunger: a death in great pain. Huguang encounters disaster the third;Across all of China, cries are soon heard.iiiThe fifth robs the people of their lives at peace; September, October, fear reaches its peak. Food is aplenty, no diners are left;Wearers aplenty, of clothing bereft. The ninth tells of bodies abandoned to rot, The Boar to Rat passage is tragedy-fraught.iv

If one can survive this calamitous year,Only then shall the title“long-lived” be sincere. A body well-molded of steel, bronze, or goldMatters not come July's upper half full of woe. Pursue your defenses, your auric physique, But compassion in heart is the only safety.Though days of caution do worry all minds, The Dragon and Snake bode well for the kind. Zhu Hongwu's mirror a young man provides;vSichuan's ill-fortune dwarfs Hanzhong's in size.vi

The king of all beasts, the great lion, he roars;viiAt his thunder, the tigers bow down on all fours;The rhino arrives, with eyes to the sky,viiiGlory he meets in a mundane locale.If one ever questions when peace shall revive, To greet the new master is chief in his mind. A year shall come in which Jia Zi betides;Mirth, joy, and laughter bring many delight. Quiz them on why, the source of their glee:“We welcome anew, our heavenly king!” The day is governed by reverence divine, The night is tranquil, no villains or fright. Though no sword in his hand, merely guidance in faith–Middle Kingdom he dwells, yet the world knows his name.ixThe true master, they call him, the people proclaim. Gold coins and silver, to many a prize, Are useless when offered before higher eyes.xLife's truest treasure that man can behold Persists in spite of the quakes of the world.

In one line straight-drawn (一) progress seven (七) men (人) , xi xiiLed (引) to the right (诱/右), they go into a den (口).A fisherman's hook (勾) has want for three dots;Enter eight (八) kings (王); twenty (廿) mouths have (口) they brought.xiiiAnswer this riddle, and find human joy;Life shall extend into halcyon days. All who have eyes can see the solution, All who are present can transmit its praise. Some shall deliver the answer in ink, No pennies to charge, nor dollars to pay. This future belongs to those gentle, good folk; Sinners meet only with imminent reproach. Honor heaven, honor earth, honor parents, honor gods;Cherish knowledge and sustenance, their value applaud. And forget this warning not. 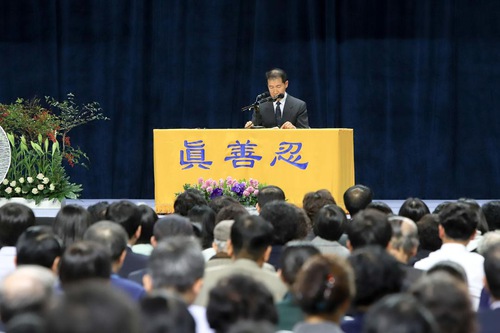 The characters for Truthfulness (眞), Compassion (善), and Forbearance (忍) in traditional Chinese. This picture was taken in South Korea during an experience-sharing conference where Falun Dafa practitioners shared how to live by those principles.

i  As of today the first Wuhan coronavirus infection was identified on December 1, 2019. Given the 14-day incubation period, the patient was likely infected in late November, which was October in the Chinese Lunar Calendar.

ii Falun Dafa (also known as Falun Gong) is a meditation system based on the principles of Truthfulness-Compassion-Forbearance. Since being introduced to the public in May 1992, the practice has benefited about 100 million people in over 100 countries, both physically and mentally. There have been many cases documented on Minghui.org that people recovered from incurable diseases through the practice of Falun Dafa or supporting the practice while distancing themselves from the Chinese Communist Party (CCP).

iii After the coronavirus outbreak in Wuhan, the Chinese Communist Party (CCP) systematically covered up the outbreak in various channels at all levels. This disease quickly spread to all provinces in China as of February 4, 2020.

iv According to the Chinese Lunar calendar, 2019 was the Year of the Boar and 2020 is the Year of the Rat. The transition from the Boar year to the Rat year occurred on Chinese New Year, which was January 25, 2020 (two days after Wuhan's lockdown).

v Zhu Yuanzhang, also known as Emperor Hongwu, was the first emperor of the Ming Dynasty. This sentence implies that a person with a great mission would come to offer salvation.

vi Sichuan Province in central China is a major nuclear base, where the mass destruction arsenal poses more potential for harm than natural disasters in Hanzhong of Shaanxi Province.

vii A lion’s roar is often used to describe the Buddha’s teaching, which is loud, clear, and powerful.

viii The rhino was said to have been banished from heaven due to his wrongdoings. “Eyes to the sky” means the rhino was longing to return home.

ix China is also known as the Middle Kingdom.

x  There are many things that money cannot buy such as health, happiness, and spiritual guidance.

xi This is a game of taking apart the strokes in Chinese characters and rearranging them to form new characters. The first two lines of the poem above say that when the characters of七 (seven), 人 (people), 一(one), 引 (guide), and 口(mouth) are taken apart and rearranged in a certain way, they form the traditional Chinese character for truthfulness (眞). In the third line, when three dots are added to different parts of 勾 and the strokes are re-arranged, the new character of forbearance (忍) takes shape. In the fourth line, when 八 (eight), 王 (king), 廿 (twenty), and 口(mouth) line up in a certain order, they form the character for compassion (善).

xii These words, Truthfulness-Compassion-Forbearance, are the core principles of Falun Dafa, a meditation system that has been persecuted by the CCP since July 1999.

xiii “Mouth” in Chinese also refers to the number of people to be fed.

Plague Predicted in the Ming Dynasty by Liu Bowen

Disasters that Foreshadowed the Demise of Ancient Dynasties

“Nothing Is Coincidental in Cultivation”