(Minghui.org) On the occasion of Chinese New Year, Falun Dafa practitioners in Quebec, Canada send their New Year’s greetings to their founder, Master Li Hongzhi, with gratitude and wish him a Happy New Year. They said that in these uncertain times Falun Dafa’s principles of Truthfulness-Compassion-Forbearance are rays of hope, and dispel the confusion in their lives and keep them on the right path. They said they are grateful from the bottom of their hearts. 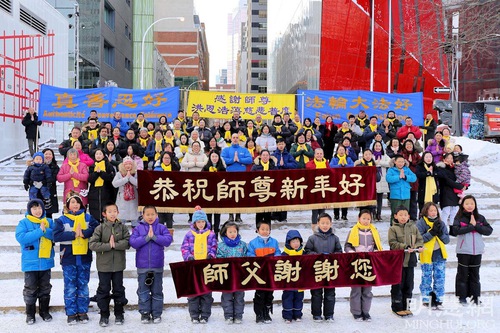 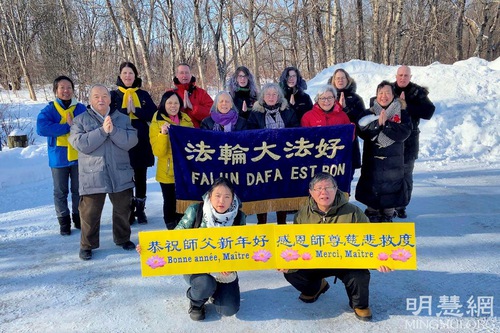 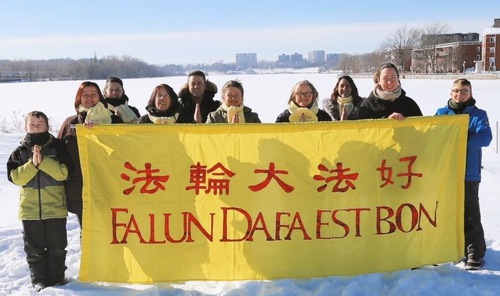 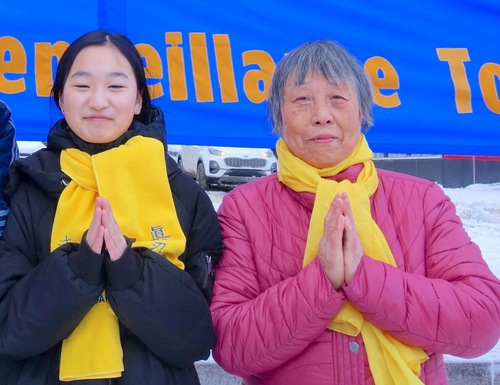 Ms. Bu is seventy-eight years old and often says she feels like a young person in her thirties. She is happy and optimistic. She said, “No words can express my gratitude to Master Li. I want to say thank you, Master, for your merciful salvation.”

Ms. Bu started practicing in 1996. “In China, if you are not strong, then you are bullied. So what can you do to survive in that society? You have to be aggressive with other people.” She said, “If I did not practice Falun Dafa, I would have followed the deteriorated moral standard and the downward trend of society.”

Ms. Bu said Falun Dafa brought her many positive changes. “Master asks us to look inward if we encounter any conflicts. So when people scold me I just smile and don’t take it personally.”

Ms. Bu was arrested four times in China because she did not renounce her faith in Falun Dafa. In prison, the guards beat her brutally and electrocuted her. They used all means to torture her and pressured her to give up practicing. No matter how she was tortured, she always said that Falun Dafa was good.

After coming to Canada she went to Chinatown to talk to people and clarify the truth about Falun Dafa. She sometimes met Chinese people who were deceived by the Chinese Communist Party (CCP)’s lies. They asked her how much money she was paid to be there. She always smiles and says, “Priceless. What our Master gives us cannot be measured in money.”

She said, “The language in Zhuan Falun is plain and simple, however it has profound meanings.” Ms. Bu said that thanks to practicing Falun Dafa, she is happy and energetic every day. She had just retired from the Tian Guo Marching Band last year. She participated in every parade and never felt tired.

Not only that, Ms. Bu said she became more capable, and she was often able to do things with ease. “I became a quick learner after I began practicing Falun Dafa. Cultivation opened my wisdom,” she said smiling happily.

Falun Dafa Taught Me How to Educate My Children 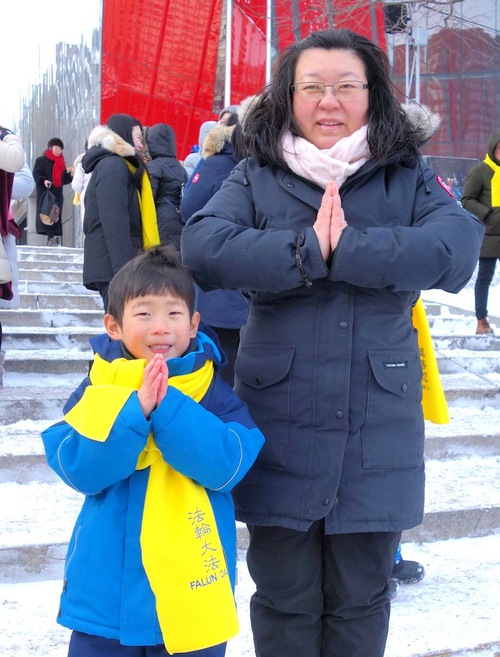 Ms. Liu is a salesperson in Montreal. She was attending university when she started practicing Falun Dafa in 1996. Her mother, who had practiced a lot of qigong, told her that there was a very special qigong master who gave teachings that were different and she asked her to come home and listen to the audio lectures.

More than twenty years have passed, and now she is practicing with her two children, just like her mother did back then. She is grateful that she and her children can cope with the many problems in their lives following the principles of Truthfulness-Compassion-Forbearance.

Ms. Liu said, “Nowadays, many parents let their children play video games because they are afraid of their children being isolated if they do not play. I have been very firm in this regard. I told my children to follow the standards of Truthfulness-Compassion-Forbearance and do not do things just because other children do it.”

Her daughter is fourteen years old. Sometimes she felt she had no common topic with her classmates when they were all talking about video games. While she is in the library, she is sometimes the only one reading books while others play games on the computer. However, she still gets along very well with everyone.

Under the guidance of Falun Dafa’s principles, both Ms. Liu’s children are kind and warm-hearted. Her daughter is humble and polite, and everyone who knows her says she is especially understanding and considerate of others. Her son was rated by his teacher as having a very high emotional intelligence because he gets on very well with all the children.

Ms. Liu thanked Master from the bottom of her heart, “Thank you Master, for the wisdom you gave me, so that when I encounter problems in my life, I can find my way. I am happy and fulfilled every day.”

Ms. Sun is a college student majoring in education in Montreal. Ten years ago, she learned about Falun Dafa from a friend in China and she has been practicing ever since.

Ms. Sun said she was a picky person before she began practicing. She had a high standard for herself and for everyone around her. She often complained that others did not do things well. After she began practicing, she realized that her mindset did not meet the standards of Truthfulness-Compassion-Forbearance, so she looked inward and improved herself according to Falun Dafa’s requirements. She became a broad-minded and easy-going person.

Once, a colleague who was working on her project slept in and was almost an hour late. In the past, she would have lost her temper, but this time, when her colleague stood in front of her with a nervous face, she reassured her, “I’ve rearranged the workload so you just need to pick it up from another team member.”

As a result of her change, the atmosphere of her team became relaxed and harmonious. Everyone worked harder and took the initiative to take on more tasks.

Ms. Sun said that shortly after she heard about Falun Dafa, she had a dream in which she saw a small note that said, “If you always recite 'Falun Dafa is good,' you will be blessed when disasters come.”

One night not long ago, Ms. Sun’s daughter, who was in elementary school, suddenly had a stomachache and rolled around in bed. Ms. Sun didn’t know what to do, and she was not sure how long she would have to wait in the emergency room due to the epidemic. She said to her daughter, “Come on, let’s recite ‘Falun Dafa is good, and Truthfulness-Compassion-Forbearance is good’ together.” After saying the words for less than two minutes, her daughter said her stomach didn’t hurt as much. She fell asleep peacefully.

Ms. Sun said, “After I began practicing Dafa, I no longer feel hopeless. I have an inner peace that I didn’t have before.”

Ms. Sun said gratefully, “On the occasion of the Chinese New Year, I wish Master Li a Happy New Year! Thank you, Master!”