(Minghui.org) Today's news from China includes incidents of persecution that took place in 11 cities or counties in 7 provinces, where at least 23 practitioners were recently persecuted for their belief. 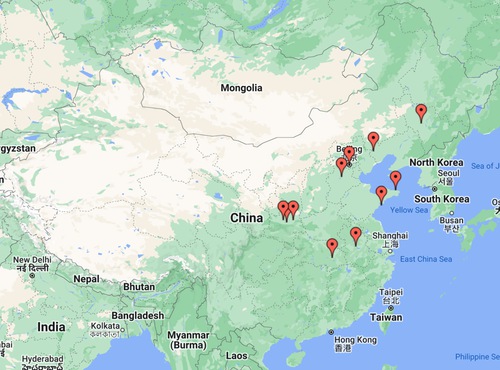 On June 24, officers handcuffed Ms. Xu, took her to her home, and ransacked the place. She was taken away afterwards. Around 8 p.m. that evening, the officers told Ms. Xu’s husband to bring 3,100 yuan to the police station in order to pick her up. When they received the money they did not give her husband a receipt.

On July 27, 2022, Ms. Hu Jinfeng from Baoding City, Hebei Province, was arrested by officers from the Gaoliying Police Station in Shunyi District, Beijing. She has been held in the Shunyi District Detention Center for over two months and officially placed under arrest. Her case will be turned over to the procuratorate.

The cases against Chen Jun, Tian Huazhen, Li Chunlian, Zhang Jiao’e, and Qiu Yongzhi in Jiangxia District have been brought to court. They are facing prosecution.

Officers from the Huazhou District Domestic Security Division broke into Ms. Lin Yaling’s home and ransacked the place around 8 p.m. on October 15, 2022. They confiscated Falun Gong books, printed materials, photos of the founder of Falun Gong, 10,000 yuan in cash, gold and silver jewelry, and gold bars, They then arrested Ms. Lin.

Ms. Zhou Hailan, in her 60s, was arrested by officers from the Songzhangzi Police Station on August 2, 2022. She was detained and her motorcycle was impounded. She was recently officially placed under arrest by the Lingyuan City Procuratorate.

Ms. Jia Fengzhi was tortured in Tiantanghe Women’s Prison. She developed symptoms of low platelets and purpura. She was taken to the intensive care unit by prison officials. She was given injections in the prison, but they did not really help. She also suffered side effects such as severe headaches, arm numbness, dizziness, and stuttering. Due to the serious side effects, Ms. Jia decided to terminate the treatment. Recently, the prison officials brought her back to the prison from the Beijing Prison Administration Central Hospital. Her family filed two applications to have her serve the term outside prison, but they were denied.

On September 7, 2020, Ms. Jia was sentenced to three and a half years in prison by the Pinggu District Court and she was fined 35,000 yuan. After being detained in the Pinggu Detention Center for nearly two years, she was taken into the No. 3 Ward of Tiantanghe Women’s Prison, in Daxing District, around November 18, 2021.

Officers from the Domestic Security Division of Huancui Police Department arrested Ms. Cong Lanying, in her 70s, when she practiced the Falun Gong exercises in the square in front of the city government building on October 16, 2022. They ransacked her home and confiscated Falun Gong books, photos of the founder of Falun Gong, a computer, a printer, and truth-clarification letters. Ms. Cong returned home that day.

On October 17, Ms. Cong went to the square to practice the Falun Gong exercises. The officers again arrested her. She is being held in the Rongcheng City Detention Center.

Six practitioners, including Li Jing, Li Xianghong, Zhang Tao, and Zhang Lan, were placed in criminal detention by officers from the Qian County Police Department. They have been held in custody for over 30 days. The police tortured them to extract confessions. The officers also coerced the practitioners into making a confession. The practitioners were not allowed to sleep for 72 hours. The officers took turns interrogating them. As a result, Li Xianghong collapsed and Li’s life was in imminent danger.

Mr. Jin Yongxin and Mr. Wang Liang have been beaten and abused by inmates in the Shandong Province Prison for a long time because they resisted the persecution.

Inmate Wang Xishuan beat Mr. Jin on June 15, 2021, which resulted in his inability to move any of his limbs, high blood pressure, and having difficulty talking. He was taken to the prison hospital around 9 p.m. that evening. Mr. Jin still has trouble walking.

“Master Helped Me Save Lives and Dissolved Difficulties for Me”