(Minghui.org) Today's news from China includes incidents of persecution that took place in 12 cities or counties in 8 provinces, where at least 42 practitioners were recently persecuted for their belief. 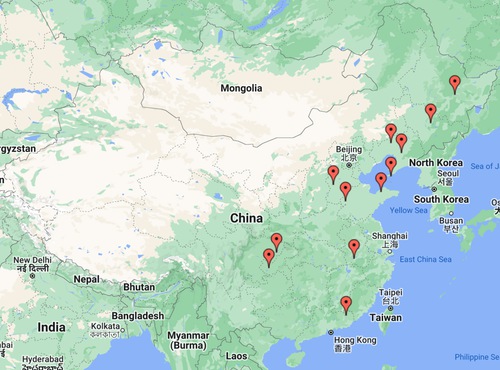 People from the Ganjingzi District Court called Ms. Li Chenying and told her to go to the court. She refused. On the morning of October 26, officers from the Dalianwan Border Police Station went to Ms. Li’s home and arrested her. They asked her family for 1,500 yuan to pay for her physical examination and they wanted them to sign paperwork. It’s not known where Ms. Li is held.

Mr. Zhu Deshan and Mr. Bai Hongyou were arrested on October 23, 2022. Police officers arrested Mr. Zhu’s wife that morning and ransacked their home. At noon the officers went to Mr. Bai’s home and ransacked the place. That afternoon Ms. Ning Shuxian was also arrested at Mr. Zhu’s home when she brought food to Mr. Zhu’s mother-in-law.

On October 26, Ms. Ning and Mr. Zhu’s wife were released. The officers told Mr. Bai’s relatives to bring him some clothes and said that they would take him to Bayan County. Mr. Zhu was held in the detention center’s East Court, where people detained on criminal charges are usually held.

The cases against Mr. Huang Zhisong and Mr. Jiang Xiagen are being prosecuted by the Taihu County Procuratorate. The cases were brought to Taihu County Court for trial on October 17, 2022. So far, the two practitioners have been held in Anqing City No. 1 Detention Center for over four months.

Ms. Li Guiying was arrested by plainclothes officers in Sanjiao Town, Meijiang District on the morning of October 22, 2022. She was taken to and is being held in Sanjiao Town Police Station. The truth-clarification materials she carried were also confiscated. The officers ransacked her home and confiscated photos of the founder of Falun Gong and an audio player. She returned home after 2 p.m. that afternoon.

Ms. Xu Lichun was reported to the police for posting Falun Gong materials. About five people, led by the director of the Xinkaihe Town Police Station, planned to arrest her. They suddenly came to her home and ransacked the place at 3 p.m. on September 11, 2022. They arrested her and took her non-practitioner husband to the police station as well.

On October 25, Ms. Xu went to the police station to retrieve her confiscated personal belongings. A deputy director on duty said that her items could not be returned to her, as her case was not over yet.

Two officers broke into Ms. Guo Guimin’s home on the morning of October 21, 2022. As soon as they entered, they photographed Ms. Guo and then quickly left without saying anything.

Before and after the CCP’s 20th National Congress, which was held in Beijing from October 16 - 22, 2022, officers from several police stations in Fuxin City, as well as people from the sub-districts and communities, persecuted Falun Gong practitioners and their families in the area on the grounds of maintaining social stability.

On the afternoon of October 23, six practitioners, including Mr. Wang Baoliang and his wife Ms. Liu Guiping, from Sihe Town, were arrested by officers from the Sihe Town Police Station. The couple was held at the Fuxin City Detention Center. The other four practitioners returned home. The officers confiscated the practitioners’ Falun Gong books and truth-clarification materials.

On the afternoon of September 26, officers from the Sihe Town Police Station went to Shi Jun’s home. They knocked on the door, but no one opened it. They broke the lock, entered, arrested Shi, and searched the place. Shi did not cooperate, Shi was carried downstairs and into the police car. The officers sealed the door with an official notice. Shi was released and returned home around 11 p.m. that night. Further details are pending.

After 3 p.m. on September 26, four people from the Xiyuan Police Station and the sub-district administration in the Development Zone went to Ms. He Yuxia’s home. Ms. He was not there. The officers were rude and arrogant. They asked her family members whether she still practiced Falun Gong, and videotaped them.

On the afternoon of September 24, seven people from the Bayi Road Police Station and from the community management office in Xihe District went to Zhang Yuexin’s home in the Jubei area. They photographed the Falun Gong books they found in Zhang’s home. They pressured Zhang to sign paperwork, which Zhang refused.

The director of the Yanjiang Police Station led two officers to Ms. Zhao Yaqin’s home on the evening of July 23, 2022. They cited the CCP’s 20th National Congress as the reason they were there. As soon as they entered, they asked Ms. Zhao whether she still practiced Falun Gong. The director said, “You are well known in the police station. Otherwise we wouldn’t be here.” Then, they started looking around for Falun Gong books and took away a few copies, as well as photos of Falun Gong’s founder.

The next day an officer went to Ms. Zhao’s home again and took her computer, but brought it back that afternoon. The officer said, “The director would waive your five days of detention. Ask your son to sign and stamp the document and it will be over.”

On the afternoon of October 17, officers Yan Ming and Wang Changsong from the Chiping District Domestic Security Division called to notify Ms. Shang Sufang, Ms. Xu Jinfeng, Lu Jinyu, Mr. Liu Mingsen, and Mr. Wang Chengguo, who are under residential surveillance, to go to the Zhenxing Police Station at 9 a.m. on October 18 for questioning by the procuratorate. The five practitioners returned home from the police station later that day.