(Minghui.org) Practitioners from all parts of Malaysia participated in a three-day Falun Dafa event at the Crystal Crown Hotel in Petaling Jaya from October 8 to 10, 2022. Both new and veteran practitioners said they cherished the opportunity to come together to read the teachings, do the exercises, encourage one another, and improve in cultivation. 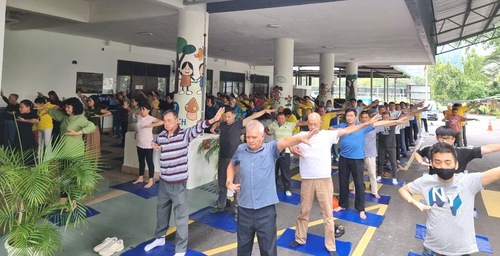 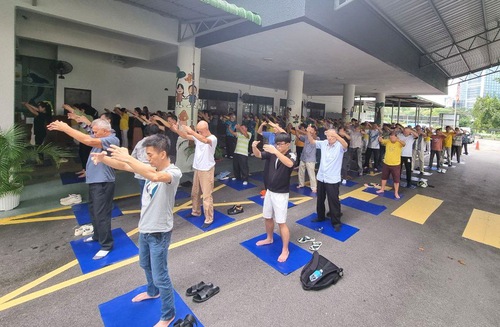 Practicing the exercises before reading the teachings

Practitioners did the exercises in the hotel on the morning of October 10. 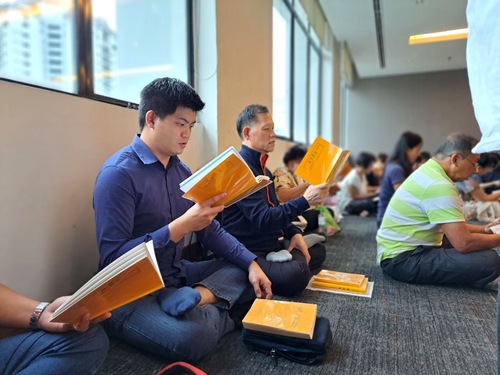 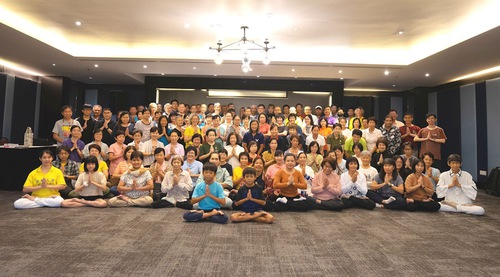 Group photo taken at the end of the three-day gathering

On the final day, practitioners exchanged their thoughts and understandings. Coordinators at various practice sites also spoke about how they encourage practitioners to do the three things well.

Yena is from Vietnam and currently lives in Malaysia. She has been practicing Falun Dafa for more than 4 years. She was introduced to Dafa by practitioners in Vietnam many years ago. However, she did not think of practicing cultivation then as she longed for a comfortable relaxed life.

When she became ill she remembered the practitioner in Vietnam who told her about Falun Dafa. She went online to find out more about it. After reading the information on the website, she wept and realized her illness was caused by karma. She then went on to read the books and contacted local practitioners so that she could join them and learn the exercises.

Yena said, “My illness disappeared. Not only that, I became pregnant and had another child.”

“My son was already 11 years old. Years passed and I finally gave up on having another child. I did not think I could get pregnant again. I want to tell everyone that Falun Dafa is amazing!”

She said if she did not practice cultivation, she would not have such good health. Words cannot describe her joy at becoming a practitioner. She feels everything in her life is perfect.

She said gratefully that she obtained these blessings after practicing Dafa and that these things cannot be bought with money: “I am extremely grateful to Dafa and Master.”

Seizing Time to Save Sentient Beings

Xie Miaolong, who is from Kuala Lumpur, has been telling people about Falun Dafa and the ongoing persecution for many years. He has been practicing for over a decade.

“I meet all kinds of people at tourist attractions. Some agree but others are against Falun Dafa. Some tourists tore up the flyer in front of me and threw it in my face. I smiled at them and did not argue.”

Later on, he learned to clarify the facts to tourists from China and got them to quit the Party. He said it was difficult but he knew it was an opportunity to establish his virtue.

Xie said, unlike in China, the environment in Malaysia is relatively better and more relaxed. Practitioners in China risk arrest and detention when they go out to tell people the truth about the persecution.

He encouraged other practitioners who are not involved in any projects to seize the time and go out and clarify the truth. “It is not difficult to open your mouth but one needs to overcome fear and other excuses such as not being willing to go out.”

Lian Jin is from Johor but now lives and works in Kuala Lumpur. He has been practicing for nearly seven years. He spoke of the importance of a cultivation environment to help practitioners progress in cultivation. When he lived in Johor, he found it hard to do the three things alone. There weren’t many young practitioners there so he had no one to discuss his experiences with. He later found a job in the media in an area that he was interested in. Although he has been busy studying and working part-time, at least he can do the three things. He was grateful for the change in his cultivation environment. In Kuala Lumpur, he can share and learn from other young practitioners.

Lian feels that many projects are already established after overcoming many challenges. He encouraged young practitioners to try and join such projects since young people have the advantage of being adept in many skills and technology. “Such skills and knowledge can be put to good use in many truth-clarification projects. Consequently, it benefits one’s personal cultivation and the greater environment,” he said.

Ze Jiang began practicing when he was young. He said he met practitioners from China during the three-day event, and now has a better idea of how to clarify the truth more effectively. He admires practitioners in China for persisting in stepping forward and clarifying the truth in spite of the pressure. He felt embarrassed for not doing well although the environment in Malaysia is comparatively relaxed. He was also glad to see so many practitioners from all parts of the country and hopes to be able to come to Kuala Lumpur more often to join other young practitioners in truth clarification activities.

Xin Hui has been practicing for 23 years and currently lives in Malaysia. She was moved by the sharings, especially those of new practitioners and those who resumed practicing cultivation. She said, “I think we should cherish our predestined relationship and every practitioner. We should treasure this cultivation environment we have in Malaysia and I hope we can all do better.”