(Minghui.org) Today's news from China includes incidents of persecution that took place in 13 cities or counties in 10 provinces, where at least 20 practitioners were recently persecuted for their belief. 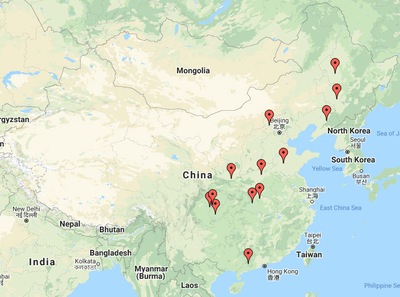 Three officers from the Xincheng Police Station, led by Tan Boyong from the Luoding City Domestic Security Division, broke into Ms. Li Beifang’s home on November 29, 2021. They shoved Ms. Li to the bed, handcuffed her, and took her to the police department. Ms. Li’s case was turned over to the procuratorate. She was forced to sign paperwork. She is awaiting notice from the court and faces trial.

Zeng (first name and gender unknown), a physician who lives in the Waimao family quarters on Yousheng Road, was recently arrested by officers from the Dongfeng Road Police Station. Zeng’s home was ransacked.

Ms. Lu Lizhen, 67, was taken to the Changchun City No. 4 Detention Center on November 17, 2021. The police notified Ms. Lu’s family that she had been officially arrested and her case files were turned over to the Chaoyang District Procuratorate.

Mr. Gu Jiushou, 82, a retired teacher from Chongqing University, was reported to the police for talking to two elementary school students about quitting the Young Pioneers, an organization affiliated with the Chinese Communist Party (CCP). He was arrested and taken to the Xinqiao Police Station for interrogation. Mr. Gu was brought home by his two sons at 9:30 p.m.

Mr. Li Hongjun and Ms. Ren Guifen were arrested and their homes were ransacked in recent days.

Ms. Hu Yulian, 78, was pressured to sign paperwork in 2021, by officers from the Longgang Police Department, which she refused. In early November 2021, police officers tricked her into getting into a car. They took her to the Dumeng Detention Center, where she has since been held.

On July 8, 2021, Mr. Liu Wenyi, Ms. Liu Bingxiang’s son, from Wanquan District, was released by the police. He went to Jiubu Township to apply for his residential ID card on July 9. Sun Yadong, director of the Jiubu Township Police Station, made things difficult for him. Sun refused to process his residential ID card and threatened that it would take five years of supervision before he would gain full freedom. Sun finally told him to come and get his ID card in a month.

In December 2021, when Ms. Wang Xiuxia, 76, went to withdraw cash from her retirement account she found out that she had not received pension payments. She asked her work unit and was told that anyone who had been given a fixed-term prison sentence, his or her retirement benefits would be canceled from the effective date of the sentence pronounced by the court. After the prison term ended, the original unit would determine retirement benefits at its discretion.

In 2000, Ms. Wang was placed under administrative detention for 15 days. She was sentenced to three years in prison in 2015. She returned home from prison in July 2018.

Recently, staff members from the local community management office and officers from the police station harassed Ms. Wang’s son and daughter. They repeatedly went to their home and pressured Ms. Wang to sign paperwork, which she refused.

Ms. Wang’s husband has passed away. Her son was divorced and works out of town, and she is raising her grandson. Her daughter does not have a job, and the family depends on Ms. Wang’s pension. With the suspension of her pension, the family’s only source of income has been cut off.

The team leader of the Jiefu Road Police Station led a group of people from the Urban Work Office and the Jingning Community Management Office to the homes of Luo Guizhen, Wu Guifang, Peng Guanghua, Zhang Suzhen, and Li Zhangbi on the morning of December 8, 2021. They put pressure on the practitioners’ family members and coerced them into signing printed copies of the three statements.

Ms. Wang Guofen, from Jiutai District, was forced to go to the Jiutai Party School between December 8 and December 10, 2021. Secretary Wang of the Jiutai District Political and Legal Affairs Committee, Wang Liang of the Political and Legal Affairs Committee, and five “experts” specialized in conducting “help and education sessions” in Changchun City. Wang who had enlightened on a devious path took turns to “transform” her. Ms. Wang refused to cooperate.

Min Ruyi (gender unknown) in Zhongxiang City was arrested by officers from the Linkuang Police Station on December 8, 2021. No further information is available at this time.

Ms. Sun Jinhui, 47, was arrested by officers from the Nanguan Police Station, Taishan District, on the morning of December 10, 2021, for distributing calendars. She was interrogated and held in a confinement room. When the officers asked her to sign the interrogation transcript, she refused. The officers then collected a sample of her blood against her will.

Afterward, the officers handcuffed her and took her to the Tai’an City Affiliated Hospital for nucleic acid testing. After she was brought back to the police station, the officers placed Ms. Sun under 15 days of administrative detention and fined her 1,000 yuan. Later, she was again put in a confinement room.

In the end, Ms. Sun was placed under home surveillance for six months by the Taishan District Police Department, to be enforced by the Nanguan Police Station starting on December 10 at 5:40 p.m. Ms. Sun returned home.

A group of officers from the Jialing District Domestic Security Division went to Ms. Zhao Changbi’s retail stand on November 24, 2021. They asked for the key to her home, which she refused to give them. The officers called in a locksmith to open the door. They ransacked the place and confiscated two printers, two laptop computers, dozens of bottles of ink, printing paper, stickers, paper cutters, staplers, five photos of Falun Gong’s founder, a copy of Zhuan Falun, two sets of Falun Gong books, and two or three bags of weekly publications in 2021 and some from earlier years.

On December 8, four or five officers from the Hantang Police Station handcuffed and arrested Ms. Zhao at her retail stand. It is not clear where she is being held.

Ms. Han Chunying was packing up corn at home on the morning of November 5, 2021. The police came to take her to the police station. She refused to go. They forcibly put her into the car. The officers confiscated her Falun Gong books, two computers, audio players, and a miniature movie projector. After being interrogated, she was released on bail. The officers coerced her husband to sign guarantee statements, then he took her home.

Personnel from the Political and Legal Affairs Committee and community management office broke into Ms. Chen Wenqing’s home on the afternoon of November 29, 2021. They pressured her to sign three statements, which she refused. Her husband spoke up on behalf of her and condemned the officers’ unreasonable, rude and coercive behavior.

“Overcoming My Attachment to Comfort”