(Minghui.org) In the past week, thousands of houses in Colorado, US have been destroyed by wildfires. After several weeks of heavy rain in the State of Bahia in northeastern Brazil, the dam burst on December 26, 2021, causing at least 18 deaths and more than 280 injuries. Earthquakes of magnitudes 5.4, 5.7, and 7.3 occurred on December 30, 2021, in the waters of Taiwan, a United Kingdom Overseas Territory, and Indonesia, respectively.

With rare strong winds, a wildfire swept through the extremely arid Colorado suburb of Boulder County on December 30, 2021, burning down nearly one thousand houses and many shops. A total of 30,000 people were evacuated urgently. Colorado Governor Jared Polis declared a state of emergency.

The local government stated that the wildfire occurred in southern Boulder County at around 11 a.m. on December 30. At that time, wind gusts along the foothills were as high as 169 kilometers per hour, causing the fire to spread rapidly to neighboring town Superior within a few hours. The two adjacent towns, Superior and Louisville are located approximately 20 miles (32 kilometers) northwest of Denver.

When the fire broke out, some areas were filled with smoke and the sky was orange. The final area affected by the fire reached 6,000 acres (24.3 square kilometers).

The police said the fire was different from previous fires in the state because it was not far in the wilderness, but right around developed areas and shops in the suburbs. The government stated that it was the most destructive wildfire in Colorado’s history. 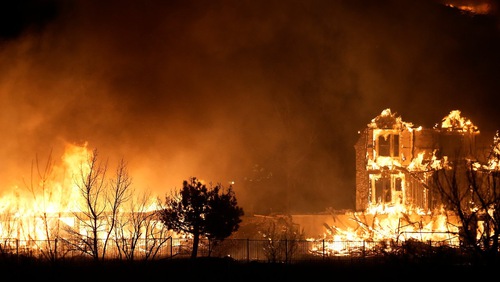 According to the latest statistics released by the local police on New Year’s Day, 991 houses were destroyed by the fire, of which 553 were in Louisville, 332 in Superior, and 106 in other areas of Boulder County. Another 127 houses had varying degrees of damage.

The cause of the wildfire is still under investigation. The United States Drought Monitoring Agency stated that most areas of Boulder County where the fire broke out are experiencing extreme or severe drought.

After several weeks of heavy rain in the State of Bahia in northeastern Brazil, the dam burst on December 26, 2021, in the cities of Itabuna and Jusiape. The heavy rainfall that began in November 2021 caused at least 18 deaths and more than 280 injuries.

Itabna, the sixth-largest city in the state of Bahia, was seriously affected by floods, which destroyed bridges and roads. Dozens of towns were flooded, and in some areas, the water level was as high as two meters.

A middle-aged local man said that he had never seen such a serious flood in his life.

Local government officials estimated that at least 400,000 people were affected, about 72 cities and towns were in a state of emergency, and nearly 4,000 people were evacuated.

Local meteorological officials said that the rainfall in December 2021 was six times the average. According to experts, the rainfall in this heavy rain is one of the largest in recent decades.

Three Earthquakes Around the World on the Same Day

Earthquakes of magnitudes 5.4, 5.7, and 7.3 occurred on December 30, 2021, in the waters of Taiwan, a United Kingdom Overseas Territory, and Indonesia. An earthquake also happened on land in China’s Qinghai Province on the same day.

The European Mediterranean Seismic Center (EMSC) also reported that at 5:30 a.m. on December 30, a magnitude 5 earthquake occurred in Golmud, Haixi Prefecture, Qinghai, China, with a focal depth of 10 kilometers.

“Saving People in a World of Ice and Snow”