(Minghui.org) To celebrate the arrival of 2022, Falun Dafa practitioners in Canberra gathered in front of the Capital Federal Parliament Building to express their heartfelt New Year greetings to the the founder of the practice, Master Li Hongzhi.

To commemorate the occasion some practitioners wrote poems:

“In the distant past we swore an oath to aid Master Li in rectifying the Fa and save sentient beings. Today, we count ourselves fortunate to have obtained the practice. Under Master’s continued guidance, we will strive to cultivate well and assimilate to the cosmic characteristics of Truthfulness-Compassion-Forbearance, in order to save more sentient beings.” 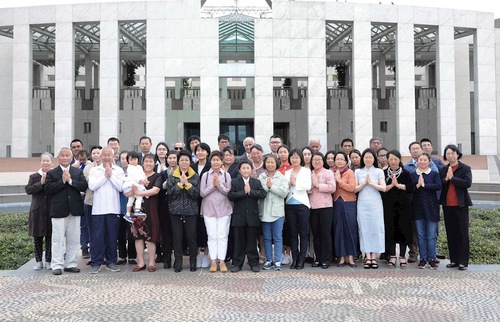 Practitioners gathered before the Federal House of Parliament in Canberra to wish Master a Happy New Year. 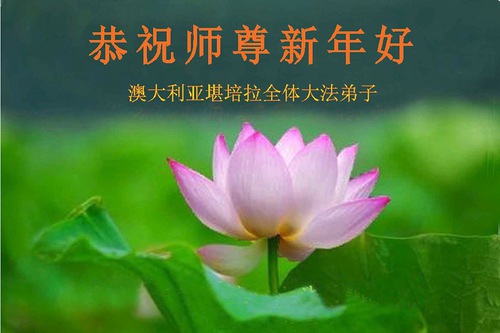 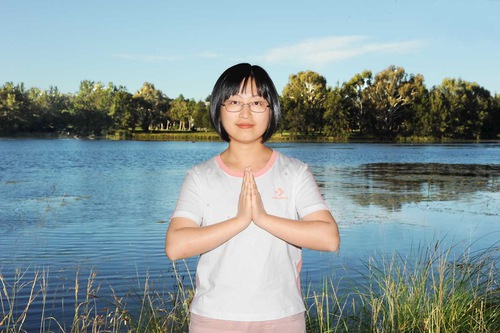 After graduating with a degree in finance from university, Liu Feixue found herself unemployed. For half a year, she spent her time at home playing games, watching movies, and taking on the occasional odd job. Each stint never lasted long, as she would either get into a fight with the boss or find the job unsatisfactory.

Liu Feixue’s mother began practicing Falun Dafa in May 1999. “Before she began practicing, my mother’s nickname was 'prickly plum’. She had so many illnesses, including headaches and chest pains, that her medication completely filled the space under our windowsill.”

“Besides completing my schoolwork, I would massage my mother’s back or massage her scalp almost daily, so she could fall asleep. I also accompanied her to massage parlors and hospitals for her regular check-up and medication. "

“One day, I suddenly realized my mother stopped asking me for massages. I noticed her health and temper improved by leaps and bounds.”

“Not long after, my mother advised me to recite the following phrase, “Falun Dafa is good; Truthfulness-Compassion-Forbearance is good”, in order to safely overcome adverse situations. I thought, “Reciting a phrase to resolve all problems?” I thought the idea was so ridiculous I refused to listen.

“My poor diet in university brought on severe gastric pains, which worsened after I graduated. While suffering an attack one day, I suddenly remembered my mother’s words. I decided there was no harm in giving it a try and began to recite the phrase silently. Within twenty seconds, my stomach miraculously stopped hurting!”

“Amazed yet suspicious, I started to doubt this phrase was responsible for my sudden cure. Soon after, my stomachache rebounded with such severity that I almost lost consciousness from the pain. I immediately recited the phrase and the pain again miraculously disappeared within a minute.”

“I knew this was no coincidence and I had encountered a true miracle. For an atheist, this was an earth-shaking realization. This incident triggered my determination to read Zhuan Falun and understand more about Falun Dafa. In this way, I formally started cultivating Dafa in November 2011.”

After reading Zhuan Falun, Liu Feixue realized Falun Dafa taught people how to be morally upright, in contrast to the false depictions of the practice in Chinese media. “Cultivation practice reduced my bad temper and increased my consideration for others. I no longer picked fights with my father and our family became harmonious.”

“In addition to healing my gastric pain, Dafa also restored my health. I used to suffer from severe colds at least twice a year, severe insomnia, and appendicitis attacks so painful I would be confined to bed. Within just three months, all my medical problems vanished without trace.”

“Through Dafa, I now know why people suffer from illnesses, the origin of human life and the reason for living. Dafa provided the answer to questions, which puzzled me since childhood. I now live a very contented life, full of indescribable happiness.”

A month after she began practicing, Liu Feixue successfully landed a stable job at a state-owned company. During a company exam, her colleagues cheated and plagiarized their answers. In line with the principles of Dafa, Liu Feixue refused to do so. When the results were released, she won first place, having obtained a perfect score. “Everyone was surprised and asked if the score had been manipulated. My job did not expose me to that aspect of technology. But my scores in both the theoretical and practical examinations were higher than those of employees who did actual work in that area. Once again, I witnessed the magic of Dafa.”

"I am grateful to revered Master for His compassionate salvation. I hope people around the world will reject the CCP’s lies and understand the truth behind the persecution of Falun Dafa. With the COVID-19 epidemic still running its course, in times of crisis believe in the phrase, "Falun Dafa is good; Truthfulness-Compassion-Forbearance is good”. It will save lives and brings good fortune! 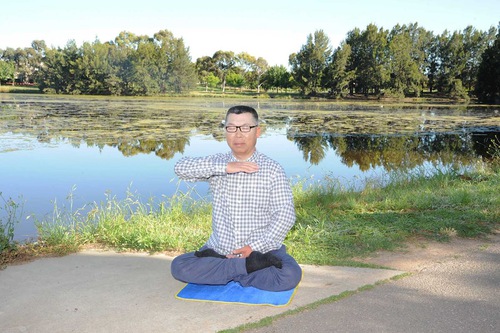 Zhao Shitang started practicing Falun Dafa in 1994. “As the youngest in my family, everyone let me have my way. I became spoiled and self-centered, unable to tolerate any form of criticism. With no interest in studying, I dropped out of school and ventured out into society.”

Before cultivating Dafa, Zhao Shitang was a mahjong gambler, chain smoker and drank alcohol almost daily. He fought and beat up many people because of his bad temper. Even his wife and child were not spared and became his target.

“Once, I was sleeping at home after working the night shift when my one month old child started to cry. Disturbed from my slumber, I grabbed the child and began to beat him. My horrified wife could only observe in silence, as any intervention on her part would worsen my reaction. Within just one year of marriage, my wife had enough of my temper and started divorce proceedings.”

“The staff at the Community Court persuaded my wife, “Your child is still so young. If you get a divorce, what will happen to him?” My wife decided not to deprive her child of his father and stopped pursuing a divorce. I learned nothing from this incident and continued to spend my life as before.

“My health began to fail while I was in my twenties. Severe stomach pains would leave me in cold sweats. Just walking a short distance of twenty meters would leave me squatting on the ground with severe pain in my back and legs.”

“In 1994, practicing qigong was popular in my hometown. On hearing that qigong could cure diseases, I followed my elder brother to his regular qigong practice site, but it was unsuitable for my needs. One group caught my attention. Their exercise movements were simple and they made no pretentious claims. I ventured over and started to learn the exercise. After practicing, my body felt warm, comfortable and relaxed. This was my first encounter with Falun Dafa and I have been practicing since then.

“The site coordinator advised me to also study the Fa teachings. Although I was practically illiterate, I was inspired by an old lady at the practice site. Unable to read and write, she managed to recite the entire contents of Zhuan Falun. After much effort, I was able to haltingly read Zhuan Falun. In the past, I was a pessimistic person who looked at life negatively. Dafa taught me the true meaning of life and drove my determination to practice diligently.”

Gradually, Zhao Shitang stopped smoking, drinking and picking fights with others. His various illnesses vanished within half a year after he began practicing, and his health also improved. With a more cheerful personality, Zhao Shitang appeared to have become a totally different person.

“My wife was the first to notice this change. She was overjoyed because I no longer scolded her or beat her. She lived in constant fear from my abuse, constantly observing my facial expressions whenever I came home. If I looked relaxed, she would heave a sigh of relief. If I looked tense, she would also tense up in fear of a beating.”

Impressed with the drastic change in her husband, Mrs. Zhao listened to a recording of Master Li's lectures and decided to take up the practice. The diseases she suffered from for over twenty years, including migraines, blurred vision, nerve paralysis, duodenal ulcers, vanished. The family feel they are blessed with harmony and good fortune.

“Falun Dafa guided me to stop my bad habits, gave me a new lease on life and brought harmony to my family. I wish to thank compassionate Master and wish him a Happy New Year!”