Home > News & Events > Parades & Other Community Events
Norway: People Learn about the Persecution and Show Their Support As 2021 Ends
Jan. 3, 2022 | By a Falun Dafa practitioner in Norway

(Minghui.org) As 2021 came to a close, a Falun Dafa information booth outside Norways’s Parliament building near Karl Johans gate in central Oslo continued to generate interest. Except for a short period due to pandemic restrictions in 2020, Falun Dafa practitioners in Norway have managed this event every Saturday for many years. It serves to expose the Chinese Communist Party’s (CCP) ongoing persecution of the mind-body practice in China.

During the Christmas season, the information table is just a stone’s throw from Oslo’s Christmas Street, and many shoppers learned about Falun Dafa and how the CCP persecutes the spiritual practice.

Those who stopped by had the same reaction: They said that the CCP’s suppression is horrifying, and many signed the petition calling on Norway’s government to help end the persecution. They also expressed hope that this terrible violation of human rights will end soon. 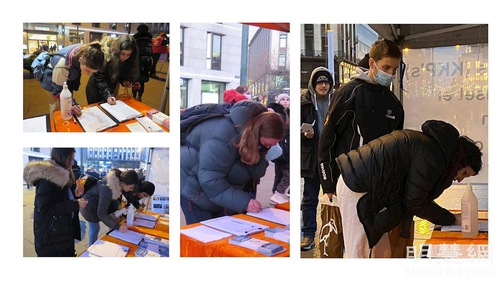 Passersby sign the petition calling for an end to the persecution of Falun Dafa in China.

As soon as she saw the information booth, Wendy India stopped and announced, “Falun Dafa! I want to sign this.” She explained, “I know what Falun Dafa is. I chanced upon it a few years ago and even learned the exercises. I love Falun Dafa!”

Svahni Brith is an artist. She signed the petition after learning how practitioners are brutally suppressed in China for their belief. She said, “I know how evil the CCP is!” She thought the regime’s stealing of organs from detained practitioners was a blatant disregard for human lives. She cited the CCP’s cover-up, which led to the worldwide spread of the COVID virus, as an example of the CCP’s lack of respect for lives. “If it had publicized the truth in the first instance after discovering the virus, the world could have taken measures and perhaps the global disaster could have been avoided,” she said. 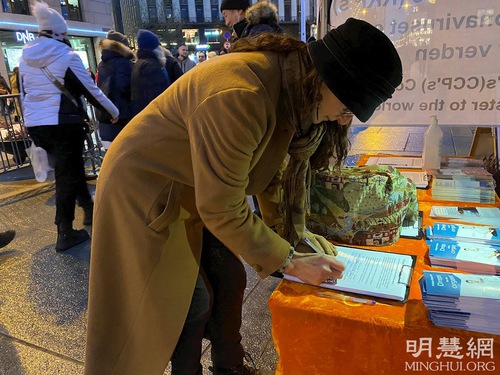 Svahni Brith signed the petition and said she hopes that the persecution of Falun Dafa practitioners in China will end soon.

Lisa and Rebecca don’t know Synne and Minda Høy, but all four women happened to be doing their Christmas shopping on the same weekend. They stopped in front of the information desk and shared the same opinion of the CCP’s terrible human rights violation: “The persecution is crazy,” “We cannot allow things like that to happen,” and “Signing the petition to oppose this is what we should do.” 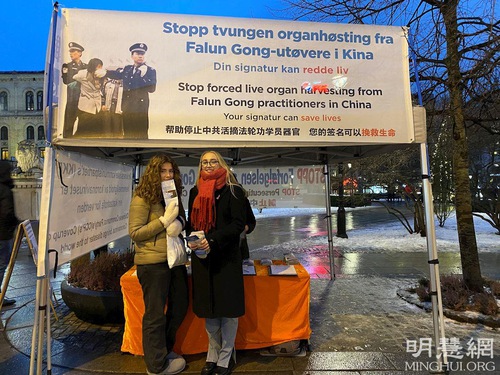 Lisa (left) and Rebecca signed the petition to show their support for Falun Gong practitioners. 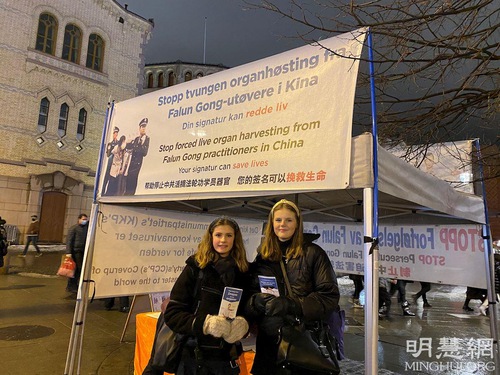 Synne (left) and Minda Høy signed the petition to show their support for Falun Dafa practitioners.

Helene, Immy, and their friends study biology at Oslo University. They chatted with practitioners for a long time and heard about some of the ways the CCP tortures Falun Dafa practitioners. Immy said, “This persecution is terrible and we never knew about it. Now we want to support ending it. This is an important issue.” 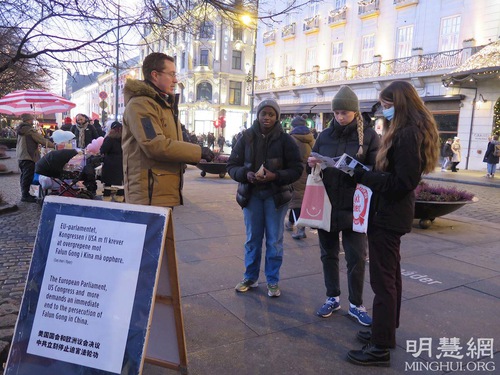 Immy (second left), Helene (third left), and a friend (first right) signed the petition after learning about the persecution.

Solvieg, in her 80s, is from western Norway. She came to Oslo with her daughter Svanhild to do their Christmas shopping and experience the city’s Christmas atmosphere. The Falun Gong information table drew their attention. Solvieg said that she’d been to China on a tour and that she and her daughter both knew that the regime persecutes many of its citizens. After signing the petition, Solvieg said, “The Western world must not remain silent on this. They must stand together to oppose this persecution.”