(Minghui.org) Minghui is calling for photo submissions to commemorate the 30th anniversary of Falun Dafa’s introduction. I hope that practitioners in China will not only ensure quality, but also pay attention to safety issues. For example, indoor photos should not have furniture, the floor, or objects in the background that would identify one’s location. The background can be white walls or nondescript tablecloths and floor coverings. Otherwise, high quality photos may not be selected due to security concerns.

The light, angle, composition and colors are also important. By paying attention to professional techniques we can showcase the kindness, perseverance, and peace of Falun Dafa practitioners as they compassionately save people and bring the world hope.

Photos of Activities Outside China

I feel that people in China very much need to see these photos of activities openly being held outside China to expose the persecution. These photos can help people understand a lot, and encourage them to search for the truth themselves.

For photos of group exercises or parades held by practitioners outside China, one should try to take photos from as many angles as possible. The composition should be beautiful and balanced, look comfortable, and show the lineup. The photographer should be careful to not let the logo or color of a business in the background steal the spotlight. For example, in photo 1, the red sign in the middle is too eye-catching. 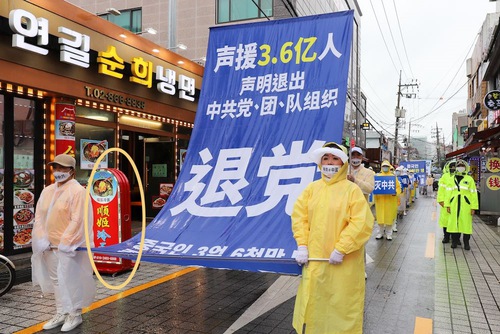 The viewing angle and composition of photo 2 are not good as there is no audience. It would be better if the banners were gradually higher from the front to the back, or if both the horizontal and vertical banners are shown. A remote control drone with a camera could be used to photograph the overall view. 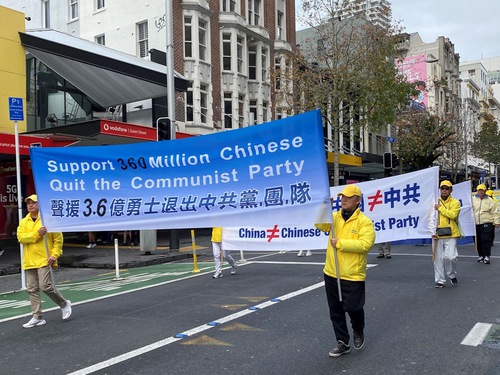 Photo 3 looks good and has a grand view and audience. But the entire photo is tilted, giving people the feeling of being twisted. If the banner is photographed straight, it will balance and stabilize the picture. For example, as shown in photo 4, it may be better if the viewing angle is raised a little more. 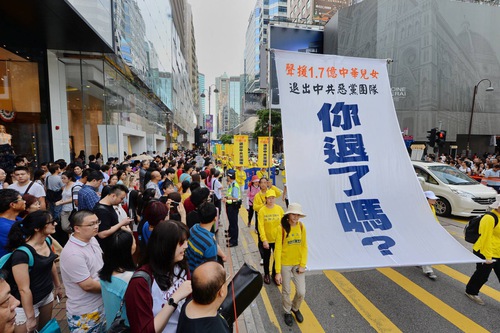 In addition, cropping is also very important. Reasonable cropping can remove interfering elements, making the picture clean and the sight line focused, as shown in photo 5. If one wants to keep a landmark building, one should also pay attention to how to compose the picture so that the photo of people on the billboard can be removed.

As for the captions, I personally think that because the pictures will be used in the truth-clarification materials and shown to mainland Chinese people, it is best to use fewer slogans and more text that directly clarify the truth, with the exception of “Falun Dafa is good, and Truthfulness-Compassion-Forbearance is good.”

The Importance of Captions

Captions can be in both large and small fonts. The design should be beautiful, so that people can understand at a glance. For example, “Tiananmen self-immolation incident is staged by the Chinese Communist Party (CCP),” can be accompanied by one or two explanatory photos.

“Reciting the two phrases to avoid the plague (add an explanation for why),” “The CCP cannot tolerate Truthfulness-Compassion-Forbearance,” “Stop the CCP’s cruelty and killing of kind people,” (only saying “stop the persecution” feels superficial. It is best to get to the point and highlight the sense of urgency) “The CCP’s live organ harvesting for profit is unacceptable,” “It is imperative to stop live organ harvesting,” “The CCP is evil (list its characteristics in small print).”

It would be helpful to add an explanation in small print on how to get around the CCP’s Internet information censorship: “The CCP kills over 80 million people,” “Suppressing Truthfulness-Compassion-Forbearance makes everyone victims,” “Good deeds are rewarded, evil meets retribution. Withdraw from the CCP for a safe future.”

In small print, list the methods of quitting the Party and its organizations: “The Nine Commentaries on the Communist Party expose the CCP’s nature.”

For group practice forming characters, you can have more photos with the words “Falun Dafa is good,” and “Truthfulness-Compassion-Forbearance is good.”

The above suggestions are for reference only.

“Heilongjiang Woman Sentenced to Three Years for Her Faith”