(Minghui.org) Today's news from China includes incidents of persecution that took place in 6 cities or counties in 4 provinces, where at least 10 practitioners were recently persecuted for their belief. 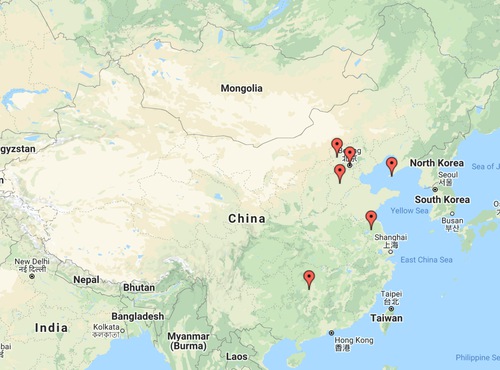 Mr. Tai Hongquan and Ms. Yang Hemei from the Shijingshan District were arrested at home around 5 p.m. on December 14, 2021. The police ransacked their homes and confiscated computers, printers, Falun Dafa books, materials, MP3s, among other personal belongings. The Moshikou Police Station also summoned their family members.

Ms. Yuan Wenge, 76, from Lijiazhuang Village, Liucun Township, was arrested at home by director Cai Huolei and two other officers from the Baizhuang Township Police Station on the afternoon of December 23, 2021. She was home alone at the time. After 6 p.m. that evening, officers from the police station again went to her home and told her husband to sign the detention notice, telling him that she’d been taken to the Shijiazhuang City No. 2 Detention Center.

On December 4, 2020, Ms. Yuan went to a farmers’ market to clarify the truth about Falun Gong and was arrested by plainclothes officers from the Baizhuang Township Police Station. The following day, officer Ma Yuekuan wanted to take her to the Shijiazhuang City Detention Center. At her physical exam in Shijiazhuang, her blood pressure was very high. Officer Ma then gave up and took her home that night. The police later processed paperwork and said that she was released on bail.

Ms. Li Jiuping was sentenced to eight months in prison and is being held in the Nanjing Women’s Prison.

Ms. Meng Xiaojing is being held in the Jurong Prison.

Ms. Peng Wenbin’s home was ransacked by officers from the Shaodong County Domestic Security Division on July 15, 2018. They confiscated a copy of Zhuan Falun, three photos of the founder of Falun Gong, and desktop and wall calendars.

On November 23, 2018, Ms. Peng went to Mr. Ning Tieqiao’s rented home. She ran into officers from the Shaoyang City Police Department and the local police station who were ransacking the place. Officer Chen Fengping grabbed her bag and searched it. He took a copy of Zhuan Falun and a copy of Hong Yin. Four or five officers carried Ms. Peng downstairs and took her to the detention center for 14 days of detention.

On February 4, 2020, officers from the Zhouguanqiao Police Station and Chejiaping Village director Peng Guihua went to Ms. Peng’s home and harassed her.

Mr. Mei Zhongshan, about 80, from Huailai County was arrested by officers from the Xinbao’an Police Station while distributing Falun Gong materials around 9 a.m. on December 15, 2021. The officers interrogated him and made a transcript. Mr. Mei returned home at 9 p.m. that evening.

Ms. Liu Zhonghua was arrested on June 2, 2021, by the local police under orders of the Liaoning Province 610 Office. She has been held in the Yaojia Detention Center. She was tried on the afternoon of November 2. It was announced on December 24 that she was sentenced to eight years in prison and fined 50,000 yuan.

“Validating Dafa Through My Own Behavior”