(Minghui.org) Today's news from China includes incidents of persecution that took place in 11 cities or counties in 7 provinces, where at least 27 practitioners were recently persecuted for their belief. 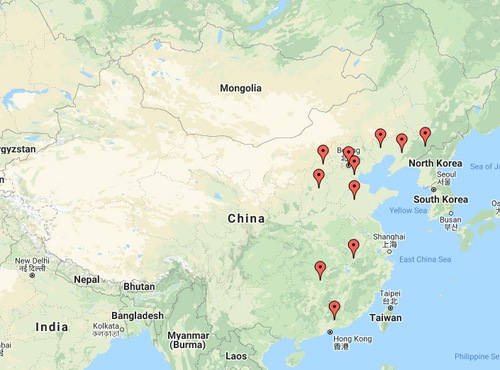 Ms. Li Huanying, 78, and her 78-year-old husband who does not practice Falun Gong were arrested on April 25, 2020, by officers from the Xinhe Police Station and the Domestic Security Division. Their home was ransacked and they were detained for 39 days. Ms. Li was sentenced to three years in prison with three years’ probation and fined 10,000 yuan.

The court convened again on November 27, 2021, and postponed probation for over a year, calling the year before the probation a “test period.”

Ms. Shi Yanying and Mr. Bai Xuesong were tried in the Lishan District Court on December 27, 2021. A second hearing was scheduled in the same court for January 7, 2022.

The Jinzhong City Political and Legal Affairs Committee held a brainwashing session from mid-September 2021 to the end of November 2021 to pressure Falun Gong practitioners to renounce their belief. The session was held at the Fuhai Ecology Park. The practitioners who were subjected to brainwashing include a male practitioner from Yudu County, Mr. Wang Shuangchun from the Yuci District, Ms. Zhang Yulan and Ms. Zhao Junying from the Taigu District, and Ms. Zhao Tianlin.

Ms. Zhang Cuiping, Mr. Li Fuguo, Mr. Li’s wife Ms. Zhang Lixia, Mr. Li’s daughter Ms. Li Min and son-in-law Mr. Li Junfeng were arrested on March 25, 2020. They were bailed out and their trial was postponed for a year because of the pandemic. Mr. Li Fuguo was taken to the Datong Brainwashing Center in August 2020. After being released, he has been constantly harassed. Ms. Zhang Cuiping has stayed away from home to avoid the persecution.

Ms. Qing Yuming, 63, was arrested at home on October 1, 2021, by Huajiadi Police Station officers. She was held in the Chaoyang Detention Center for a month, then in the Wangsiying Brainwashing Center for a week. After being released, she was monitored for two weeks. While Ms. Qing was in custody, officers ransacked her home and seized all her Falun Gong books, her cell phone, and a music player, among other items.

Ms. Zhao, 61, was arrested at her daughter’s home on October 25, 2021, by officers from the Nanhu Police Station. They seized all the Falun Gong items from her home. Ms. Zhao was held in the Chaoyang Detention Center and the Wangsiying Brainwashing Center and was released on November 28, 2021. An officer ordered her husband to watch her at home and prevent her from leaving.

Mr. Liu Binglei and his older sister Ms. Liu Binghuan were recently arrested. They were held for two days and released on bail.

Ms. Li Junlan was arrested at the Sanyuanpu Market on December 22, 2021, for distributing items with information about Falun Gong written on them. Officers from the Domestic Security Division made the arrest. Her home was ransacked. A photo of Falun Gong’s founder Mr. Li Hongzhi, a full set of Falun Gong books, and other items were confiscated. Ms. Li is being held in the Changliu Detention Center for a term of 15 days.

Mr. Jiang Xiagen was arrested at home on December 15, 2021, by Dananmen Police Station officers. They seized multiple USB drives from his home. He was held in the Anqing Detention Center for 15 days and released on December 30.

Six officials went to Ms. Xiao Meilian’s home on December 31, 2021, and threatened Ms. Xiao and her family. Unable to get the key, they broke the lock, barged into Ms. Xiao’s bedroom, and confiscated a photo of Falun Gong’s founder and all her Falun Gong books. The officials were Zhai Jianhua, Party secretary of the Yuancheng District Political and Legal Affairs Committee; He Peicheng, director of the Yuancheng District 610 Office; Xu, director of the Dongpu Police Station, and three officers from the Yuancheng Police Department.

“Thoughts that Surfaced after a Fellow Practitioner Was Arrested”