(Minghui.org) Practitioners in Sweden held activities in Stockholm's city center on January 7 and 8, 2022. They demonstrated the exercises and told people about Falun Dafa and how the Chinese Communist Party’s (CCP) is persecuting it. Many people were touched by Falun Dafa’s principles, Truthfulness-Compassion-Forbearance, and signed a petition calling for an end to the persecution. 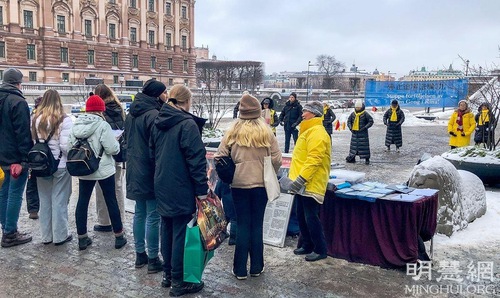 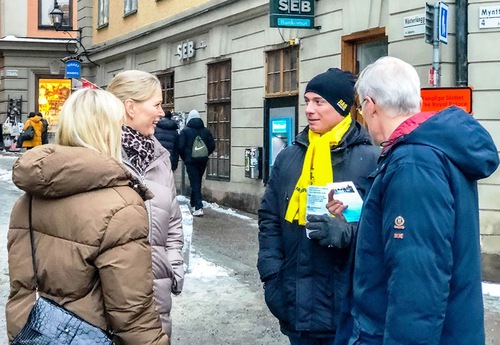 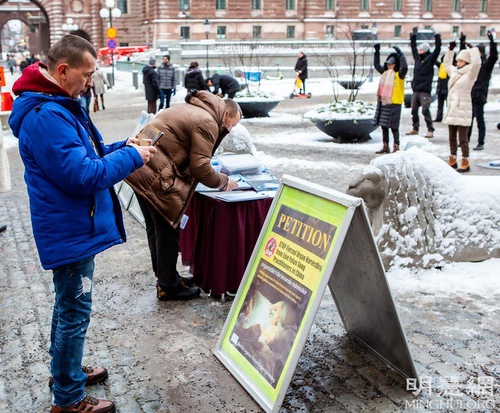 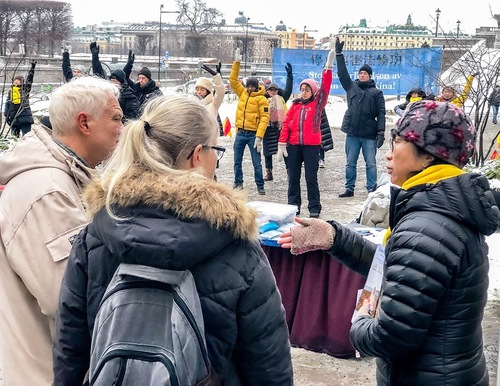 People in Stockholm learn about the persecution and sign the petition.

An elderly man told a practitioner, “I’m lucky to run into you today! I usually take another street home but felt the urge to go this way for some reason. Now I know why,” he said with a big smile. He said he didn’t want to get involved in many things due to his age, but he felt that he had to sign this petition. “I’ll write something about it (the persecution) and tell more people.”

Annie, an ethnic Chinese who grew up in Sweden, and her boyfriend talked with a practitioner to find out more about the persecution. She said her mother used to visit China every six months and heard negative things about Falun Dafa from the Chinese propaganda. Annie signed the petition and took brochures for her mother and friends so that they wouldn’t be deceived by the CCP. Both Annie and her boyfriend said they learned a lot.

A man stopped and took photos and videos. As he signed the petition, he told a practitioner, “I believe all of this is true. I support you!” He explained that he was from Mongolia and knew that the CCP not only killed many Mongolians but also persecuted Falun Dafa practitioners who follow Truthfulness-Compassion-Forbearance. “We are all victims. I support what you are doing,” he said.

An older couple said they were from Japan. A practitioner explained to them what has been happening in China with the persecution. The man exclaimed, “I resent the CCP! What you are doing is great! Keep up the good work! We’ll work together!” Both the husband and the wife said they liked Chinese culture. They appreciated practitioners’ exposing the persecution, and hope more people will say no to the CCP. 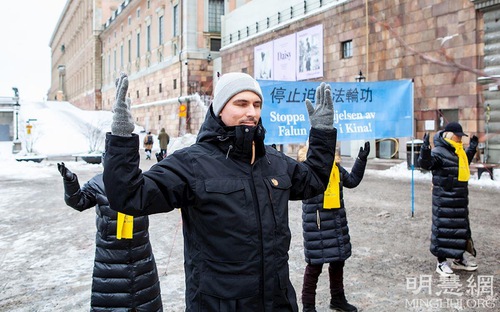 John, a sound engineer, said that he used to struggle with addictions, but after practicing Falun Dafa for two weeks his addictions were gone. He said that by following Truthfulness-Compassion-Forbearance, he now gets along well with the people around him. “I’m fortunate to witness the power of Falun Dafa,” John said. He called for people the world over to learn the truth about the persecution and not be deceived by the CCP’s lies.

Falun Dafa (also known as Falun Gong) was first introduced to the public by Mr. Li Hongzhi in Changchun, China in 1992. The spiritual discipline is now practiced in over 100 countries and regions worldwide. Millions of people who have embraced the teachings, which are based on the principles of Truthfulness, Compassion, and Forbearance, and learned the five exercises, have experienced uplifted health and well-being.