(Minghui.org) Today's news from China includes incidents of persecution that took place in 16 cities or counties in 9 provinces, where at least 27 practitioners were recently persecuted for their belief. 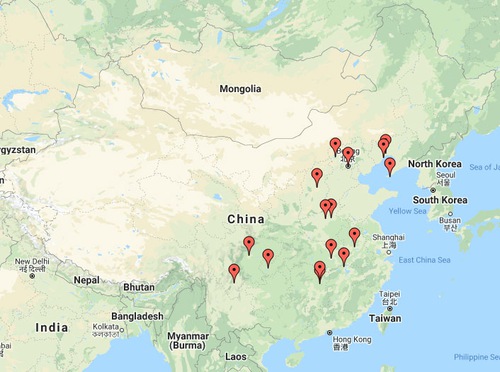 Ms. Hu Wenye, 65, was sentenced to one year and four months in prison with one year and six months of probation and fined 2,000 yuan.

On December 11, 2021, Mr. Sun Wanshuai, who opened a studio at home to teach painting, was tried in the Jianxi District Court of Luoyang City, Henan Province, for sending sensitive information over WeChat, a popular social media app.

The court did not allow Mr. Sun’s defense lawyer to represent him. The lawyer had previously entered a not guilty plea. In the courtroom, Mr. Sun was handcuffed and shackled. He gave a five-minute defense. The judge did not pronounce a sentence at the time.

Ms. Zhang Guimei was reported to the police for distributing Falun Gong materials and was arrested. Her case will be heard at the Shunhe Hui District Court on the morning of December 23, 2021. Ms. Zhang is still at home due to health reasons.

On December 16, people from the town police station and the 610 Office went to Ms. Zhou Xianfeng’s home and harassed her.

Ms. Mao Xianhua and another practitioner were arrested by officers from the Shizi Police Station in the Chaisang District on December 17, 2021.

Ms. Ji Guorong was reported to the police while talking to people about Falun Gong on December 14, 2021. She was arrested by officers from the Jinsheng Police Station and the Puyuan District Police Department.

Mr. Li Xiushan, 70, from Dachengzi Town in the Miyun District was arrested by Dachengzi Police Station officers on December 18, 2021, as part of a new round of persecution initiated prior to the upcoming Winter Olympic Games. The officers confiscated three Falun Gong books.

In May 2021, Ms. Zhang Jiacheng’s daughter Ms. Lu Chunqiong, 56, was taken into custody by the Xichang City Domestic Security Division. Her mother had already been arrested.

When the police interrogated Ms. Lu in May, she was not allowed any water for two days. The officers forcibly collected her fingerprints and footprints. They photographed her and made audio and video recordings of her. They pressured her to write and sign guarantee statements. They also confiscated her cell phone. She was subsequently released.

Ms. Jiang Dailan was arrested by plainclothes officers while distributing Falun Gong materials in Jiahai Industrial Park on June 14, 2019. She was taken to the Dongxihu Police Station and held in custody.

In the meantime, Ms. Jiang’s husband passed away and her only son was diagnosed with late-stage cancer, yet the police did not let her see them. Ms. Jiang was later taken to prison and held for one year. The prison officials still did not allow her son to visit her. On December 13, 2021, when her sentence ended, her family went to pick her up, but the prison officials instead took her to a brainwashing center to continue persecuting her. Ms. Jiang was not allowed to go home.

Ms. Xu Qingfang was arrested on December 12, 2021. Her non-practitioner daughter Ms. Meng Tao and non-practitioner nephew Mr. Xu Chi went to the Daxue Police Station and demanded Ms. Xu’s release. They were both arrested and placed in criminal detention. It is not known where Ms. Meng and Mr. Xu are being held.

Yao Peishan (gender unknown) was arrested on December 10, 2021. The police ransacked Yao’s home and confiscated Falun Gong books. Yao is being held in Cell 102 in the Changqiao Police Station.

The five practitioners were taken to the Huludao City Detention Center the following day. Their families sent in clothes and daily necessities but the detention center refused to take them. The detention center officials told them that they could only deposit money.

Zhou and another practitioner have been taken to the Huludao City Hospital in the old district. Zhou is on the third floor of the hospital building.

Xu Yinghua (gender unknown) from the Hongling Residential Community in the Malanzi area was arrested at home by Hongqi Town Police Station officers around 7 p.m. on June 2, 2021. Xu’s home was ransacked. Xu was held in the Jinjiajie Drug Rehabilitation Center and then transferred to the Yaojia Detention Center on June 20. Xu has since remained in custody at the detention center.

On November 25, 2021, Zhou Weixin, a team leader of Baozhu Village, Mengyang Town; two women; and Mengyang Police Station officers went to elderly Ms. Yang Dingyu’s home. They demanded that she give up practicing Falun Gong. Ms. Yang did not cooperate. Two officers grabbed her hands and tried to put her fingerprints on a sheet of paper. Ms. Yang shouted, “No fingerprints! No fingerprints! Master, please help me!” The two officers let go of her, and they all left.